What did you all think of the Enterprise episode ‘Regeneration’? Having the first Borg vs human contact on earth and then a fight in space and on the Enterprise 2 centuries before Q introduces Picard & crew to the Borg in TNG? Did you think it was a nice tie-in with the movie ‘First Contact’ or did you not like it? I only felt it odd that Archer’s crew could defeat the Borg without much damage and just a couple of people lost when 24th century Starfleet ships have struggled & lost the fight……however to be fair it is just one small ship with mostly recently assimilated Borg members.

The episode is an indirect sequel and a prequel to the events of Star Trek: First Contact – at the end of the movie, in which the Borg go back in time to conquor earth but the Enterprise E with Picard & crew had followed them in and defeats the Borg. In the destruction of the Borg, a few of them fell back onto the earth, landing in the frozen tundra of the Artic. In the 22nd century, about a 100 years after the incidents of the movie, a research team of humans finds the frozen bodies of the Borg and the crash site. While the bodies are thawing in their labs they come to life and assimilate the humans and take off in their ship taking the remains of their craft with them. When starfleet arrive they find the members of the expedition missing along with the craft and track the ship, also alerting Captain Johnathan Archer who takes the Enterprise on an intercept course. 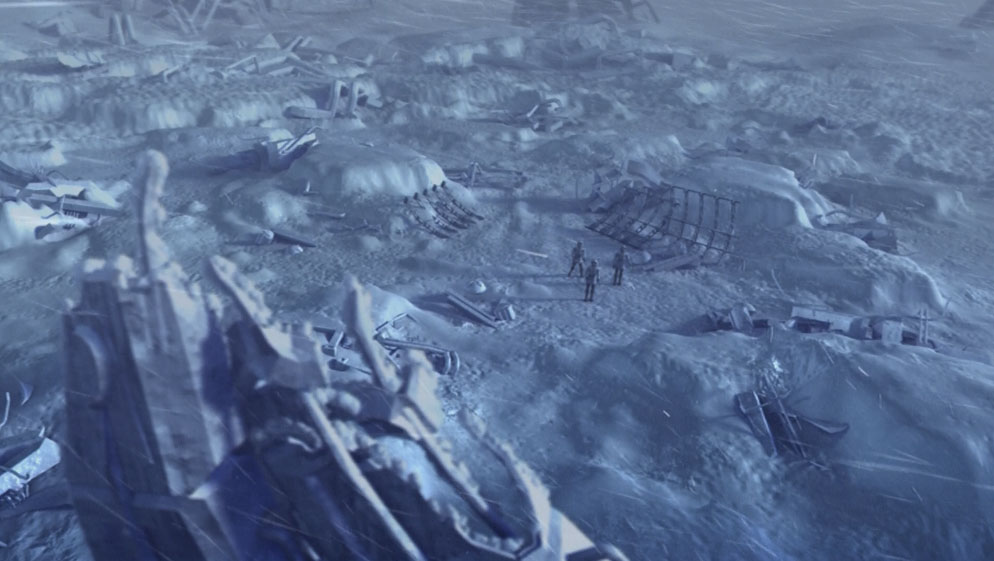 The Enterprise receives a distress signal from a Tarkelian freighter but they are too late to do much. They find two faint biosigns and bring the two Tarkelians to their sickbay. However the two aliens have been infected and they start attacking Doctor Phlox and the security guard stationed at sick bay – Phlox is infected but the guard is only knocked unconscious.  The assimilated Tarkelians try and access the ship’s controls and altering them and when weapons fire has little effect on them, Archer has no choice but to blow them out into space. The Borg have modified the craft they had stolen with parts of their own craft and it now looks more menacing and advanced. When Enterprise catches up the Borg, the alterations that the assimiliated Tarkelians did to the ship come online and the Borg boards the starfleet vessel. The Borg gives an ominous warming that  “You will be assimilated. Resistance is futile.’

With changes made to their weapons the crew have to battle the boarding Borg and Archer & Reed beam to their ship, plant chargers and after warding off a few more attacks by the Borg, beam out before the charges detonate and blow up the Borg. Later, T’Pol goes to see Archer in his ready room. He has had the computer analyze a sub-space message that the aliens sent to the Delta quadrant (where the Borg reside) – the message contains Earth’s coordinates. T’Pol tells him that there is no immediate worry as a subspace message would take at least two hundred years to get there, providing it even makes it at all. This does not comfort Archer, however. He surmises that the invasion has merely been postponed…until the 24th century. Thus setting the events of the movie First Contact when the Borg do finally arrive to earth – 200 years later. 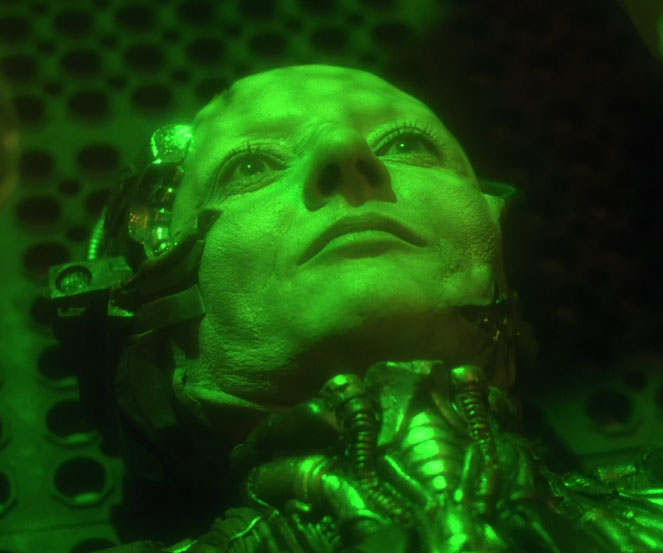 So what do you, the Star Trek faithful think? Did the makers of the show introduce te Borg in this time of history as a means to boost the ratings of the show? The Borg remains unnamed in this episode and starfleet doesn’t learn too much about them but a total lack of knowledge about the species when Picard & crew do meet them in the 24th century? And did it feel that there were hardly any damage to Archer’s Enterprise and so little loss of people/crew when the much advanced 24th century ships had lots of difficulties and many were destroyed or assimilated. Did Archer & team beat the Borg too “easily”? The only excuse for that I can think of is that most of the Borg that Archer & co had met were newly assimilated (except for 3) and hence not yet in full power. Same for their ship, which is a human transport vessel being modified by the Borg and not a Borg ship per say. I have mixed feelings about this episode.

One thought on “The Borg In Star Trek Enterprise”