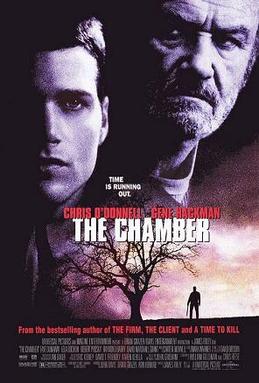 The Chamber is a 1996 crime thriller film based on John Grisham’s novel of the same name. The film was directed by James Foleyand stars Gene Hackman, Faye Dunaway and Chris O’Donnell. Among the supporting staff are Robert Prosky, Raymond J Barry & Lela Rochon.

The book is a big favorite of mine. The story is about Klansman Sam Cayhall (played by Gene Hackman) who is tried and found guilty of bombing the office of Marvin Kramer, a Jewish civil rights lawyer in Indianola, Mississippi, in 1967, killing Kramer’s five-year-old twin boys and leading to the amputation of Kramer’s legs and his later suicide. After two mistrials Sam is tried again for murder in the bombing, and is eventually convicted and sentenced to die in the gas chamber at the Mississippi State Penitentiary. Enter Adam Hall.

Now without a lawyer, Sam becomes a pro bono case for a team of anti-death penalty lawyers from the large — and ironically Jewish — Chicago law firm of Kravitz and Bane. Representing Sam is his own grandson, Adam Hall, who travels to the firm’s Memphis office to aid Sam in the final month before his scheduled execution. Although lacking experience in death penalty cases, Adam is determined to argue a stay for his grandfather. Sam, despite his violent past, is one of the few living links to Adam’s family history. Sam’s alcoholicdaughter, Lee Cayhall Booth, slowly reveals the family’s tragic past to her nephew, Adam.

As Adam tries to find a way to stay the execution he learns that Sam was actually the accomplice. Before the Kramer bombing, Sam usually used very basic bombing and planned them to minimize damage and not to kill but only to serve as a warning. Rollie Wedge, was the bomb expert and timed the bombing so that Kramer would be at the office at the time; the two sons were there only because their mother was ill. Sam refuses to coroborate this new evidence as he took an oath of loyalty to the Klan. At the same time, Lee, faced with the unearthed ghosts of the family history and having lapsed back into full-blown alcoholism, reveals to Adam that in the early 1950s, as children, she and Adam’s father had witnessed their father murder the family’s African-American neighbor, Joe Lincoln, during a fight that had started because Adam’s father, Eddie, had wrongly accused Lincoln’s son of stealing a toy soldier.

Eddie had blamed himself for the murder, as well as Lee, for failing to stop Sam, the guilt of which was a factor in Eddie’s later suicide and Lee’s alcoholism. Lee also reveals how their father had been indoctrinated into the Klan as a child, showing Adam an historic photograph of Sam as a young boy attending a Klan lynching. Wedge has his men beat up Adam when the young lawyer comes questioning but the Klansman is later arrested by the cops. Adam’s motions for a stay are denied by the courts, including the United States Supreme Court. Despite Sam’s finally authorizing the release of relevant Sovereignty Commission files, the Governor refuses to grant clemency. Sam is executed in the gas chamber, though Adam remains as a confidant and advocate for his grandfather up until his execution, and he and Lee embrace at the end, in the hope that maybe the ghosts of the past are gone.

There are several changes from the book though not for the better. The film is too short to make a compelling story and it suffers greatly due to that. I give it a 7 outta 10!