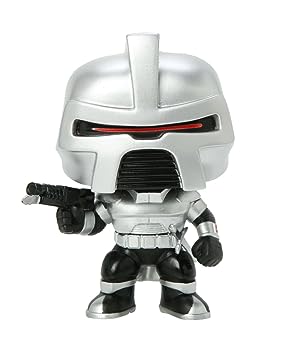 I have a few Funko Pops in my collection and was asked today as to which one is my most cherished one. While Star Trek is my favourite tv show franchise & movies as well and though the Spock pop that I have is very cool and awesome, I had to think about it a little bit. The most expensive one I had in my collection, based on what I paid the eBay seller, is the Cylon model.

In the original 1978 series, Cylons are a fictional race of robots at war with the Twelve Colonies of humanity. The Cylons were created by a reptilian race, also called Cylons, that died out centuries before the series takes place. At the beginning of the series the Cylons are singularly devoted to the destruction of humanity. The war started when the Cylon Empire sought to expand into the territory of the Hasaris, and the Human Colonies intervened on behalf of the conquered Hasaris. Due to those events, the Cylon Empire now viewed the entire human race as a target.

Cylons are led by the Imperious Leader, an IL-Series Cylon elevated to a supreme leadership position over all Cylons. All Cylons, from the IL-series down, typically repeat the phrase “By Your Command” when responding to any order. Cylon society appears to be almost exclusively military. Until the discovery of Gamoray, which the Colonial fleet had targeted for its rich fuel reserves, no civilian Cylon outpost had ever been seen by anyone.

As a big part of my childhood, the BSG Cylons (even though a villainous race) is very near and dear to me. I was a fan of the show from the age of 4 so 40 years of being an ardent BSG fan is something to cheer for.