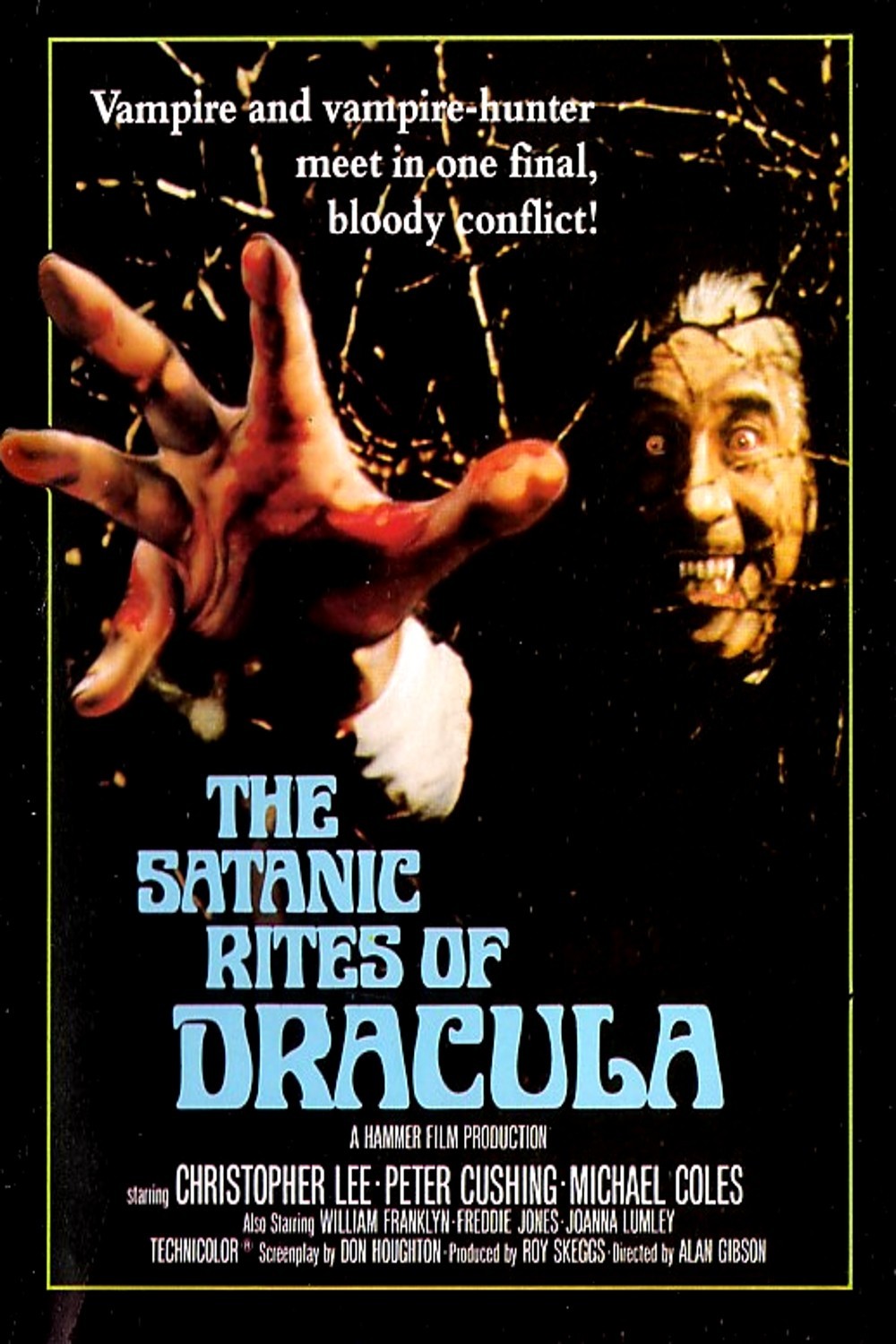 Ok, as hard as it for me to say, the quality of the Hammer Horror Dracula movies went down as the series progressed. So much so that it felt that it wasn’t even trying very hard anymore & just trying to cash in on the craze for the Count and the horror genre in general. After the high of Horror Of Dracula we get 5 more movies that continue the series, 3 of which are good. Suddenly they change directions in 1972 and bring the legend to modern times (or the 70s as it was when the movies were released) and we got Dracula A.D. 1972, which except for a few good scenes, is not up to par. Neither is it’s successor The Satanic Rites Of Dracula. First of all, I don’t really feel that Dracula or vampires in  general should be connected to Satan. Not so ever in the least. It doesn’t make sense but then some of these movies seem to want to propogate the Christianity myth and hence it made sense for them to do this movie.

The Satanic Rites Of Dracula is my least favourite of the movies as it so boring (so much so that I had to watch in over 3 nights). Dracula is seen very little in this movie too! Four prominent members of society are involved in a cult that conducts Satanic rituals led by a Chinese vampire lady in an English country house. A secret agent investigating them is captured and tortured but he escapes and informs his bosses of the going on before dying. Scotland Yard’s Inspector Murray once again consults noted occult expert Professor Lorrimar Van Helsing. The cult kidnaps the Secret Service secretary Jane and she is bitten by Dracula! How did he get resurrected? Who knows?

Anyways, Murray and his men are joined by a matured Jessica Van Helsing (played here by Joanna Lumley) and investigate the house. Jessica finds Jane chained to a wall, now turned into a vampire, along with a few more female vampires. Jessica is rescued by Murray, who also kills Jane. Van Helsing visits one of the members of the cult, a scientist who used to be his friend, and finds him working on creating a virulent strain of the bubonic plague. A guard knocks Van Helsing out as the scientist is killed but the professor is able to find out that the 23rd of the month, which is the “Sabbath of the Undead” is when the plan is to take place. He finds out that Dracula is alive and heading a property development (built on top of the church yard where Dracula died in the previous film) and confronts him. He tries to shoot Dracula with a silver bullet but is beaten by the Count’s conspirators. Dracula decides that killing Van Helsing would be too simple and has him transferred to the country house. Meanwhile, Jessica, Murray and Torrence, while observing the country house, are attacked by snipers. Torrence is killed, while Murray and Jessica are captured. Murray awakes in the cellar and escapes the clutches of the female vampires, and later Chin Yang just as Dracula arrives with Van Helsing.

Dracula announces to Van Helsing that he intends to turn Jessica into a vampire and make her his bride (he seems to have a thing for her from the previous movie – Dracula in love?) and that he intends to release the plague on humanity. As the 3 remaining cult members object, Dracula’s hypnotic command stops them and causes  one of them to break the vial, releasing the bacteria and immediately infecting the minister, causing him horrible suffering. Murray runs in and a fire breaks out as he battles a guard. Murray rescues Jessica asDracula attacks Van Helsing, who escapes through a window into the woods. He lures Dracula into a hawthorn bush – a symbol of good as it provided Christ with his crown of thorns – where he is entangled until Van Helsing drives a stake through his heart. The End!

The 9th movie of this series (and 8th to actually feature Dracula) is 1974’s The Legend Of The 7 Golden Vampires. I guess Hammer decided to chuck bringing the Dracula myth to modern times and went back in time for a movie that combines the vampire lore with Kung Fu that was all the craze back in the 70s. We get Peter Cushing but no Christopher Lee as Dracula! Continuity wise, it causes a dilemma. You’ll have to ignore the events in Dracula A.D.1972 – because in that Van Hellsing dies back in the year 1872 whereas here he is alive and kicking in the year 1904! Ok, so we see a Chinese shaman named Kah, who goes to Transylvania in 1804 and summons Count Dracula from his crypt (I guess we don’t know how he is resurrected here either). Kah, aTaoist monk and High Priest of the Seven Golden Vampires in rural China, goes on to tell the Count that the Golden Vampire’s power is fading and he needs him to restore their former glory. Dracula considers the offer and accepts on one condition; that he takes on Kah’s body and image to escape his castle which has become his prison. So despite the latter’s pleas, Dracula merges with Kah in a cloud of smoke and then proceeds to rural China.

Many years later in 1904, Professor Laurence Van Helsing is lecturing in Chungking University on the legends of Chinese vampires. He tells the gathered students of an unknown rural village that has been terrorized by a cult of seven known as ‘Golden Vampires’ for many years. The legends goes on about a lone farmer who went to rescue his wife from the vampires but is too late to save her as she is drained of blood. He grans a golden bat medallion, seen as the symbolic lifeforce of these vampires, from one of them and runs away. The high priest (Dracula in Kah’s body) orders the vampires to chase him, aided by some zombies who arise from their graves. The farmer puts the medallion against a Buddha idol and is killed as the vampires catch up with him. However when the vampire tries to retrieve his medallion, he is destroyed by flames on touching the Buddha statue. Van Helsing goes onto say that he is positive the village still exists and is still terrorised by the remaining six vampires. The students all disagree with the legend being true and walk out. However one man, Hsi Ching, meets Van Helsing in the evening and tells him that the farmer was his grandfather and that the village in the story is his own ancestral village. He wants the professor to help him destroy the vampires.

Van Helsing agrees and embarks with his son; Leyland Van helsing, Hsi Ching and his seven kung-fu trained siblings on a dangerous journey funded by a wealthy widow named Vanessa Buren (the sexy Norwegian actress Julie Ege) who Leyland and two of Ching’s siblings saved from an attack by the Tongs. On the long journey they have to defeat and kill off the Tongs and a romance is kindles between Leyland and the youngest sibling and only girl, Mai Kwei, as well as an attraction that starts between Hsi Ching and Vanessa. Later they are ambushed by the six remaining vampires in a cave along with the undead. The group kills 3 of the vampires and several undead in an exciting battle at the end of which the remaining 3 vampires and their undead retreat. he following morning, the party reach the village, partly ruined but still populated, and prepare to make their final stand. They use wooden stakes as barriers and digging a large trench around them filled with flammable liquid. That night the vampires & the undead attack the village leaving almost everyone dead. Vanessa is bitten and becomes a vampire and seduces Hsi Ching, biting his neck. Him not wanting to turn, kills both himself and Vanessa on a pointed stake. All but one brother is left alive as the battle ends and only one vampire remains but he captures the sister and rides off to the temple.

Leyland purses them to the temple and rescues the sister from being tied to the alter and Van Helsing and some men kill the vampire. Then Kah approaches and Van Helsing recognizes Dracula and calls him out which the count does so. In the ensuing struggle, Van Helsing succeeds in stabbing Dracula with a spear through the heart. Weakened, the Count collapses onto one of the altars and gradually decays to bones. The spear that killed Dracula is weakened and collapses, smashing the vampires skull. Soon, there is nothing left of of the Count, save for his dusty remains and the blood-stained spear. Van Helsing sighs with relief as the nightmare of Count Dracula is finally over.

While Satanic Rites is boring, full of plot holes and downright dull with a bad script, the final movie is a lot more fun & energetic due to the kung0fu angle. However the movie suffers from laughable makeup and special effects that even in 1974 was ridiculed. And Chinese vampires & undead skip & hop as they run! Ridiculous! and the extras are so stupid as they run in the battle. Both movies have topless women, the latter a bit more when the Chinese women are laid to be killed. Worst of all is the fact that you didn’t need Dracula in the last movie and they got a piss poor replacement for Christopher Lee. But the latter movie is so much more fun to watch. I’d give The Satanic Rites Of Dracula a 5 out of 10 and The Legend Of the 7 Golden Vampires a 6.5 out of 10!