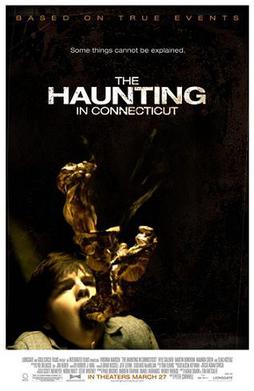 The Haunting in Connecticut is a 2009 American psychological horror film produced by Gold Circle Films and directed by Peter Cornwell. It is supposedly based on Carmen Snedeker and her family, who were the subject of the book In a Dark Place: The Story of a True Haunting (1992). The movie stars Virginia Madsen, Elias Koteas, Martin Donovan & Amanda Crew.

In 1987 Sara Campbell moves with her cancer-stricken son Matthew to a rural house in Connecticut. The long drives from their home to the hospital for his treatments being the main reason, Sara decides to take the large old house from a man renting it. The following day, Peter arrives with Matt’s brother Billy and cousins Wendy and Mary, and they choose rooms. Matt chooses the basement, where there is a mysterious door. After moving in, Matt suffers a series of visions involving an old, bearded man and corpses with symbols carved into their skin. The next day, Peter learns that the house was supposedly a funeral home; the room behind the mysterious door is a mortuary.

Matt tells another patient, Reverend Nicholas Popescu (Elias Koteas), about the visions. Nicholas advises him to find out what the spirit wants. Later, Matt finds a burned figure in his room who begins to move toward him. When the family comes home, they find a shirtless Matt with his fingers blood-covered from scratching at the wall. As the family starts to strain under the stress of Matt’s illness and his behaviour, the children find a box of photographs, which show Jonah, a young man from Matt’s visions, at a séance, emitting ectoplasm. Wendy and Matt find out that the funeral home was run by a man named Ramsey Aickman. Aickman also conducted psychic research and would host séances with Jonah as the medium. At one séance, all those attending, including Aickman, were found dead and Jonah disappeared. Nicholas theorizes that Aickman was practicing necromancy in an attempt to control the dead and bind them to the house.

That night, Nicholas finds human remains in the house and removes them. Matt awakens to find Aickman’s symbols carved into his flesh. He is taken to the hospital, where he encounters Jonah. Nicholas and Matt begin to have simultaneous visions. Everyone in the séance is burnt, after a flash of bright light. The barely alive Aickman told Jonah to get out of the house, concerned that the demonic presence will get him next. The spirit traps Jonah in the crematory, and cremates him alive. Peter and Sara learn that Matt’s cancer treatments have had no effect. They then discover that Matt has escaped the hospital. Back at the house, Nicholas leaves a message telling the family to get out of the house immediately – Jonah’s spirit was actually protecting them from the spirits. Sara goes in despite the efforts of the firemen and cradles Matt. They are brought out by the fire crew and they try to resuscitate a dying Matt. As Matt slips away, he has a vision of himself standing in the graveyard where he sees Jonah, no longer appearing burnt. He seems about to follow Jonah when he hears his mother’s voice.

He returns to his body and Jonah’s spirit leaves him. Matt’s cancer disappears, and the house was rebuilt and resold with no further reported incidents of haunting. Ofcourse! Well it isn’t a great movie just about average but then I’d watch anything with my eternal crush Virginia Madsen in it. She was quite good in the film too. So is Koteas. I’d give the film a 6.5 outta 10!