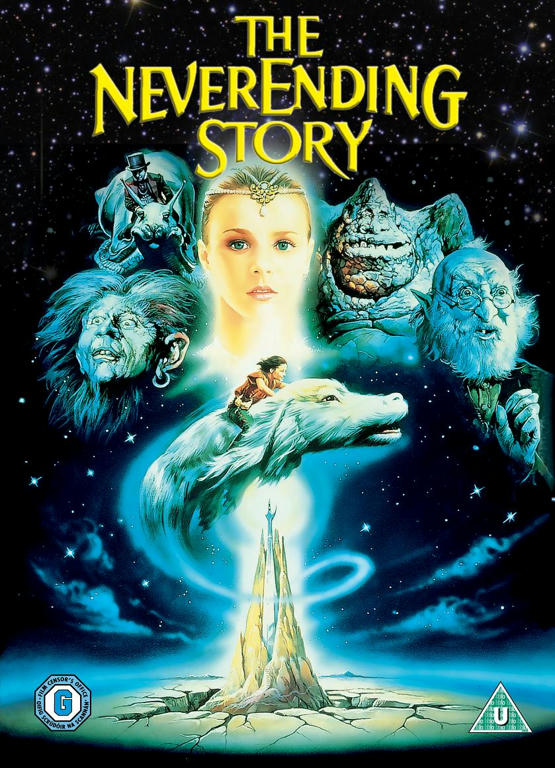 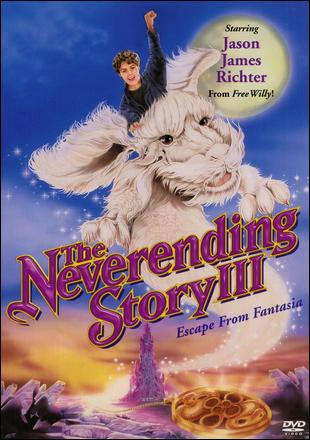 Way back when I was a preteen boy I watched a movie based on German author Michal Ende’s novel of the same name – The NeverEnding Story. The movie The NeverEnding Story starred Barret Oliver, Noah Hathaway (Boxey from the original BSG), Tami Stronach, Moses Gunn, Thomas Hill, and Alan Oppenheimer as the voices of Falkor and Gmork. It’s about a boy named Bastien, who recently lost his mother, and who hides in a book store when chased by school bullies. He takes a book that the mysterious book store owner tells him isn’t for him and reads it at school (having being late, he skips classes altogether). It the book he reads about a fantasy land, Fantasia which is being slowly destroyed by the Nothing. He follows the adventured of a brave young warrior who is assigned the task by the child like Empress of putting an end to the Nothing. Atreyu travels far and loses his horse, is helped by a flying luckdragon named Falkor, is attacked by a wolf like creature and finally comes back to the Empress having failed.

The Empress says that only a human child, Bastien, can help them and he is whisked to Fantasia. Bastien is asked to think up a name for the Empress, which he so does calling her ‘Moonchild’. She then shows him that the Nothing has wasted Fantasia to all but one grain of sand but Bastian’s wishes and imagination can help to restore the world to its former glory. The more wishes he makes, the more it will be restored. Bastian makes his wishes and as he watches Fantasia is soon back to normal and he rides Falcor across Fantasis and back home.

The NeverEnding Story Part II came out in 1990 was directed by  George T. Miller and starred Jonathan Brandis as Bastian Bux, Kenny Morrison as Atreyu, and Alexandra Johnes as the Childlike Empress. Not as good as the original the story takes place a year or so after the events of the first season. Having problems with his father at home, Bastian is happy to be called back to Fantasia by the Empress and join Atreyu in saving the land again. Bastian gets influence by the evil sorceress Xayide and the  film involves her persuading Bastian to forget about his mission and instead make a series of silly wishes. Each wish that Bastian makes causes him to lose a memory, and when he loses all memories he will not remember Fantasia and the Emptiness will take over. He even sides with her and fights with Atreyu who is trying to make him aware of Xayide’s true nature and accidently kills him when they tussle and Atreyu falls to his death. Bastian chooses to wish his friend back to life and uses his last wish  by wishing for Xayide to have a heart. The overwhelming sense of suddenly being able to feel emotion proves to be too much for Xayide and the evil sorceress explodes in a blast of light, and with her destruction, Fantasia is restored in all its glory. This is boring film with bad acting and the only plus points being Brandis and the glamorous Xavide – played by Clarissa Burt!

4 years later we got a 3rd movie, The NeverEnding Story Part III starring Jason James Richter as the principal character Bastian Bux, and Jack Black in one of his early roles as the protagonist’s tormentor, the school bully Slip! Bastian has a new family, his father having remarried and along with his stepmom he has a new stepsister, who does not like him. Bastian gets chased by some bullies at school, finds the book in the library and returns to Fantasia. However the bullies find the book, the mediallion and on reading it understand the link between creating new stories. They use their cruelty to bombard the land with fireballs and a storm. Bastian now has to return back and get he book back from the bullies. He has a rock biter child & a talking, walking tree stump as company along with two gnomes.  Bastian manages to retrieve both AURYN and the book and defeats the bullies with a range of fighting moves he wished for. He is also aided by his new step sister who finally accepts him as her brother. The acting is so terrible that I wanted to break the screen into a 1000 pieces.

So the original while a bit cheesy is still a wonderful movie. I’d suggest you watch that and give the other two a miss. I’d given the movies a 7, 3 & 2 out of 10 respectively!