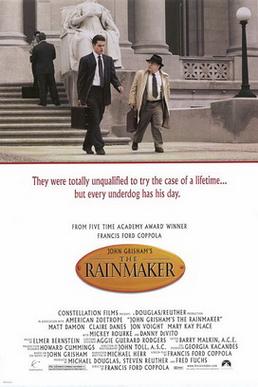 Damon plays Rudy Baylor, a poor law student waiting to write the bar exams and looking for a job. After his abusive father left him and his mother, Rudy struggled to get by in a poor neighbourhood and worked many shifts in a bar while at law school. With no high paying firm interested in him, he reluctantly goes to an interview with J. Lyman “Bruiser” Stone, a ruthless and corrupt but successful personal injury lawyer, who makes him an associate. To earn his fee, Rudy is turned into an ambulance chaser, required to hunt for potential clients at a local hospital. He meets and joins Deck Shifflet, a less than ethical paralegal who failed the bar 6 times but is resourceful in gathering information, and practically an expert on insurance lawsuits. Rudy has two cases – one a will for a widow, who later also becomes his landlord as he manages to rent the small apartment above her garage- and a bad faith insurance case.

The latter case may be worth several million dollars in damages, which appeals to him because he is about to declare himself bankrupt. While he was studying for the bar in a hospital cafeteria, Rudy meets and becomes friends with Kelly, a young woman who is being battered by her husband. She never presses charges even if the cops know her case well. When Bruiser skips town, after being investigated for racketeering and his offices are raided, Rudy & Deck start their own 2 man law firm with their meager earnings from a couple of cases they worked for Bruiser (and who generously gave them a bonus) They file a bad faith suit on behalf of a middle-aged couple, Dot and Buddy Black, whose 22-year-old son Donny Ray is going to die from leukemia. Donny Ray would most likely have been saved by a bone marrow transplant had his medical claim not been denied by Great Benefit, the family’s insurance carrier. Rudy passes his exams and finds himself up against a group of experienced and devious lawyers from a large firm that is headed by Leo F. Drummond (Jon Voight), a showman attorney who uses unscrupulous tactics to win his cases.

Judge Hale, who is assigned the case is about to dismiss it but dies of a heart attack and the case is reassigned to a more sympathetic judge, Tyrone Kipler who immediately denies the insurance company’s petition for dismissal. After a particularly violent attack, Rudy persuades Kelly, to whom he is attracted, to file for divorce. At Kelly’s home the two pack her bags but are interrupted by her husband Cliff who fights with Rudy, attacking him with a baseball bat. The husband is killed and Kelly takes the blame, telling Rudy to go home and pretend he wasn’t there. To protect Rudy from being implicated in Cliff’s death, Kelly tells the police she killed her husband in self-defense. Rudy promises to defend Kelly if the case goes to trial, but the district attorney declines to prosecute, knowing Kelly would never be convicted. Donny Ray dies, with Rudy equally devastated along with the young man’s parets, but not before giving a video deposition and the case goes to trial, where Drummond capitalizes on Rudy’s inexperience. He gets vital testimony by Rudy’s key witness, former Great Benefit employee Jackie Lemanczyk (Virginia Madsen), stricken from the record, and attempts to discredit Donny Ray’s mother (Mary Kay Place).

Due to Rudy’s single-minded determination and skillful cross-examination of Great Benefit’s unctuous president Wilfred Keeley, the jury finds for the plaintiff with a monetary award far exceeding all expectations. However the jubilation is short lived as Keeley attempts to flee the country and Great Benefit declares itself bankrupt, thus allowing it to avoid paying punitive damages to the Blacks, as well as any future judgments in class-action lawsuits. With no big payout coming, Rudy & Deck won’t get their share Dot Black expresses satisfaction that at least they put Great Benefit out of business, and that it is now unable to hurt other families like hers. Convinced that he can never live up to expectations that future clients will have Rudy leaves his practice to instead teach law with a focus on ethical behavior. He leaves town with Kelly, wanting to retain a low profile and protect Kelly from any possible retribution by Cliff’s vengeful relatives.

Although it is a good film, it never matches the book as a lot of things have to be left out to keep the film at less than the 2 hour mark. I feel that the story suffers from that, even the relationship between Kelly & Rudy isn’t highlighted enough. Still worth a watch. I will give the film a 7.5 outta 10!