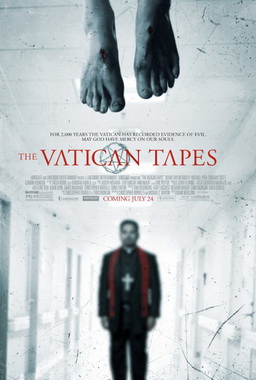 I didn’t know much about this movie other than having watched a bit of a clip online. Decided to check it out and see if it was worth it. It was…ok I guess. The Vatican Tapes is a 2015 American supernatural horror film directed by Mark Neveldine from a screenplay written by Christopher Borrelli, which is in turn based on a story by Chris Morgan and Christopher Borrelli. The film stars Olivia Taylor Dudley, Kathleen Robertson, Michael Peña, Djimon Hounsou, Dougray Scott, and John Patrick Amedori, and was released on July 24, 2015, by Lionsgate.

An ordinary but pretty 27 year old, Angela Holmes, is celebrating her birthday with a surprise party hosted by her live in boyfriend Pete. Her sheriff dad Roger Holmes, disapproves of her choice in men (it looks like he would disapprove of anyone) is staying with her for the weekend. Angela cuts her hands badly on the knife and goes to the hospital for treatment. Soon she starts to display increasingly disturbing behaviour erratic and strange behaviors, which finally catches the eye of local priest Father Oscar Lozano. She causes a car crash which hospitalizes her and while at the hospital she ominously picks up a baby at the maternity ward, seemingly to harm it. When the police investigates, she points to one of the detectives towards the window where a raven sits (the messenger of Satan) and he stares at it and then proceeds to take two light bulbs and pierce his eyes out. She also seems to know about stuff that she shouldn’t know, like details about the love life of her doctor and the things she is doing with a married man.

All this seem dangerous enough for Lozano to call (who you gonna call) the Vatican and lead exorcist Cardinal Bruun who travels all the way to the US to chase the demon away from the girl. The cardinal arrives from Vatican City, armed with holy water and the camcorders and proceeds to exorcise the demon from the girl – only thing is, it’s no ordinary demon but apparently possibly Satan himself. Angela coughs up three eggs (what???) and spouts off some ancient language that mocks the church and stuff and later the house blows up killing everyone except Lozano and the girl. She wanders off and starts to perform “miracles” healing people etc. She is hailed as possibly divine or a charlatan and as the movie ends, Lozano is recruited by the Vatican where he is shown clips from various tv sources the rise in popularity of Angela. This is important because as the church states, the anti-christ will come performing such “miracles” and a false religion will rise around him/her and people will be misled to worship it.

It held some promise but ended up being more of the same. A few creepy things stand out and Olivia Dudley does a good job but overall it is very forgettable. 6 outta 10!

There has been a problem with your Instagram Feed.