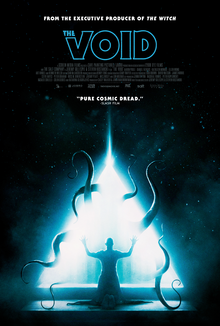 The Void is a 2016 Canadian horror film written and directed by Steven Kostanski and Jeremy Gillespie, and produced by Jonathan Bronfman and Casey Walker. It stars Aaron Poole as deputy Daniel Carter, Kenneth Welsh as Dr. Powell, Daniel Fathers as Vincent, Kathleen Munroe as Allison, and Ellen Wong as Kim. The film was originally crowdfunded on Indiegogo and had raised $82,510. The film was originally shown at the 2016 Fantastic Fest and later at the Toronto After Dark Film Festival. It was given a limited theatrical release in April 2017, initially opening in 31 theaters and later expanding to 50. It grossed an estimated $55,000 on its opening weekend.

You get an 80s horror vibe with this flick, with parts of the plot reminding me of The Beyond. As the movie starts we see junkie James running from a farm house in the middle of nowhere, with a woman also running just behind him. The duo are behind chased by Vincent & his son Simon who catch up with the woman and shoot her before burning her. James stumbles onto the road and is found by Deputy Daniel Carter who puts him into his car on seeing his bruises and wounds. He calls it in and reluctantly takes James to the nearest hospital, Marsh County, which is where his estranged wife Allison works as a nurse. The hospital is about to shut down after a fire destroyed much of the basement and other parts of the building. Dr. Richard Powell, nurses Allison and Beverly, intern Kim, pregnant girl Maggie, her grandfather Ben, and patient Cliff are the only ones remaining as the equipment and files are being packed to ship to a new hospital.

Bev is caught in a trance and murdering Cliff with her skin removed from her face. Beverly moves toward Daniel who shoots her dead. Daniel collapses due to a seizure and experiences a strange vision. State trooper Mitchell comes in to the hospital to collect James after discovering a bloody scene at the farmhouse. Daniel goes outside to call in Beverly’s death from his patrol car, but is confronted by robed cultists, one of who wound him. He kills the man and runs back in. Daniel and Mitchell rush into James’ room when they hear him screaming. They find Beverly’s corpse has transformed into a tentacled creature as Daniel and Mitchell rescue James and lock Beverly in the room. In the lobby, Vincent and Simon enter and hold the group at gunpoint, demanding to get to James. James takes Maggie as hostage and stabs and kills Dr. Powell when he tries to calm him down. The creature emerges from Beverly’s room and devours Mitchell. Vincent and Simon kill the creature and regroup with the others in the lobby. Vincent and Simon accompany Daniel to retrieve a shotgun from a patrol car, while Alison ventures into the basement to collect medical supplies for delivering Maggie’s baby.

Powell rises from the ground seemingly still alive and follows Alison and captures her. On discovering that Alison is missing, Daniel and Vincent search for her and find photographs and files indicating Powell was the cult’s leader. Powell phones Daniel, taunting him and mentions the vision he experienced while unconscious. Leaving Maggie & Ben in Kim’s hands, Daniel, Vincent & Simon force James to go down to the basement with them in search for Alison. James explains that Powell has the power to transform people and he was reluctantly drawn into the cult by a woman on the promise of sex and meth. Alison regains consciousness on an operating table where Powell explains he has found a way to defy death after the loss of his daughter Sarah. Having cut off his face, Powell shows Alison that something now grows inside her. Daniel, Vincent, Simon, and James find a hidden area in the basement and end up surrounded by deformed corpses brought back to life. One of the creatures kills James as the other three men get separated.

As Maggie enters labor, Kim hesitates to perform a C-section. As Ben pleads with Kim, Maggie stands and slits his throat, revealing she is carrying Dr. Powell’s child. Kim hides as cultists enter the building and Maggie leaves. Daniel finds a pregnant Alison on a hospital bed but as he looks again sees a creature with tentacles. The vision of a pregnant Alison is one of her when she was in labour with their child and a traumatized Daniel inally attacks his wife’s mutated remains with an axe. Daniel is transported to a morgue room with a glowing triangle on the wall. Powell’s voice tells Daniel that he found the ability to conquer life and death. Powell promises that Daniel can have his child back if he is willing to die first. Maggie arrives and stabs Daniel as Powell appears without any skin in front of the triangle as Maggie kneels before him. Powell recites an incantation before the triangle as a now frightened Maggie’s torso explodes, as she births the reborn Sarah. Vincent and Simon arrive and battle the beast.

The creature attacks Vincent who pours isopropyl alcohol over it and himself, allowing Simon to kill them both with a flare. As Powell begins transforming, he tells Daniel he can be with Alison if he gives himself to the abyss. Daniel refuses and tackles him, leading both men to tumble into the void. Meanwhile, the creature pursues Simon who escapes, and is teleported back to the hospital to reunite safely with Kim. Daniel and Alison are shown in the netherworld beneath a black pyramid as they hold hands.

A slow mover that builds up in intensity and visual scares as it goes alone, the film is sure to appeal to horror fans. The ending leaves us wanting more and hoping that answers will be provided in a possible sequel or two. What is this void, what happens to Powell and Daniel & Alison in this void. What is that humongous black pyramid? I give the film a 7.5 outta 10.