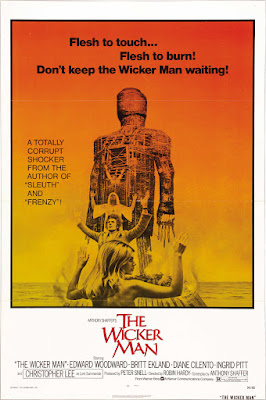 The Wicker Man is a 1973 horror film directed by Robin Hardy  andwritten by Anthony Shaffer. The film stars Edward Woodward, Christopher Lee, Diane Cilento, Ingrid Pitt, and Britt Ekland. Paul Giovanni composed the soundtrack including some really good songs. The movie is based on the 1967 novel Ritual by David Pinner but has several changes. The story centres on the visit of Police Sergeant Howie to the isolated island of Summerisle, in search of a missing girl the locals claim never existed. Howie, a devout Christian, is appalled to find that the inhabitants of the island practise a form of Celtic paganism.

Sergent Howie, a devout & celibate Christian is sent an anonymous letter requesting his presence on Summerisle, an island known for their bountiful production of fruit, concerning the disappearance of a young 12 year old girl named Rowan Morrison. Taking the station’s boat plane, he travels to the island where he find the locals strangely not only showing no recognition to the girl’s photo but her name as well. Even the girl’s mother says she doesn’t exist and that she only has one daughter, who is with her. Howie is disturbed to find out that the people on the island practice paganism and worship the ancient Celtic gods of their ancestors. Couples copulate openly in fields, children are taught in school of the phallic importance of the maypole and frogs are placed in the mouth to cure whooping cough. He then finds photos of the May Queens, 12 year old girls selected each year, with that year’s produce but sees that the one for 1972 is missing – and told that it broke. The local school teacher & children all lie to him about not knowing Rowan but Howie finds the school register with Rowan’s name stricken off.

Howie meets the charismatic leader of the community, Lord Summerisle, who’s Victorian era scientist grandfather  developed several new strains of fruit that he believed could prosper in Scotland’s climate. He also led the people to go back to worshiping the old gods. On exhuming Rowan’s grave he only finds a dead hare, leading him to believe that Rowan is to be a pagan sacrifice and confronting the Lord. Howie later discovers that a negative of last year’s harvest photograph does in fact exist. It shows Rowan standing amidst a group of boxes, indicating that last year’s harvest was a poor one and that the crops—the island’s only means of income—had failed. Howie believes that Rowan is kept alive to be sacrificed during the May Day celebrations. That night the inn keeper’s daughter Willow, does a soft, seductive dance in the nude. Although she is in her room, the celibate Howie feels her presence and is tempted. The next morning while trying to get help, Howie finds his plane damaged so he now has to find & save Rowan himself. He beats up & ties the inn keeper and wears his costume – Punch who is a prime character in the festival, representing the “fool” in a historic tale. Howie joins the procession that goes throughout the town, performing harmless “sacrifices’, dancing & cavorting. Rowan is found tied to a tree. Howie cuts her free and flees but after a brief chase, emerges at another entrance where Summerisle and his followers stand waiting for them. Howie is shocked to see Rowan merrily embrace her captors and then notices that he is being surrounded.

Summerisle explains that the crops did fail and the Howie was lured to the island using the missing girl as bait. His devout Christian lifestyle, virginity and his livelihood as a policeman mean that he meets the outstanding criteria for a human that is to be sacrificed to appease the gods and provide a successful harvest. And the last bit – thinking he was rescuing Rowan, Howie came to the sacrificial place of his own free will, a critical point for the sacrifice. Howie is stripped bare and dressed in robes and is locked in a large wicker man statue along with some animals. The statue is set on fire while the islanders surround it and sing a folk song, while an anguished Howie condemns them and recites a bible hymn. As the movie ends, the flames reach the head and it falls down, revealing the morning sun in the distance.

All the while the villagers were lie playing a trick on Howie, denying Rowan’s existence while giving each other knowing winks. Paganism abound : pregnant women dancing barefoot through orchards of blossom trees, nubile young girls jumping naked through a fire on a lawn surrounded by penis shaped topiary, small 1970s boys prancing round a maypole while singing a song with suggestive lyrics. Christopher Lee is at his best even while sporting a yellow dress and long black Morticia Addams wig, doesn’t seem in the slightest bit comical, but rather is imposing, lordly and awfully sinister. Some comedy, some bleakness, some beauty & some horror ; 9 out of 10! Set in a similar vein as the 1973 horror classic The Wicker Man, Robin Hardy, who directed it, wrote a book called Cowboys For Christ back in 2006 and then directed The Wicker Treebased around the story of that novel. The book deals with many of the same themes and ideas, namely the clash between paganism and Christianity. The movie was shown in film festivals in mid to late 2011 and given a world wide release in 2012. The film stars Graham McTavish, Jacqueline Leonard, Brittania Nicol, Henry Garrett, Honeysuckle Weeks & Clive Russell with a brief cameo by Christopher Lee.

Beth & Steve are part of a born again Christian group in Texas who call themselves the “Cowboys For Christ” who travel to “heathen areas” of the world to preach Christianity. Beth is a successful country and gospel singer with a mainly female fan following and she & fiance Steve both wear purity rings waiting for their wedding night to consummate their relationship. However Beth has a more raunchier image before she was “born again”, shown in one of her earlier music videos, wearing short & tight outfits singing provocative lyrics & gyrating with male actors. The two are chosen to go to Glasgow, Scotland to go and “save some souls’ there. They get a less than warm welcome; although the people appreciate the songs none want to listen to preachings about accepting Jesus into their lives. People politely shut their doors in the faces of the young Steve & Beth who want to spread the word, much to the dismay of the born again duo. They however get a warm reception from their hosts Sir Lachlan Morrison and his wife Delia, the laird of the small village of Tressock in the Scottish lowlands. The people there worship the ancient Celtic goddess Sulis. They invite Beth and Steve to come back with them to preach, but intend them for a more central part in Tressock’s May Day celebration.

Steve is smitten by Lolly, who in turn shares her affection for him. When Steve chances upon a naked Lolly praying in the brook, she asks him to join her and they then have sex. With the exception of Lolly, it is apprent that the others in the village treat the duo the way people would treat a clever pet who just showed them a new trick. People praise Beth’s voice and her songs and even join them but it is clear that the duo haven’t even begun to convince them about Jesus or Christianity. The folks want to prepare for their main festival the May Day celebrations. Beth is invited to be the May Queen and is given the special dress make for the occasion, while a reluctant Steve is to be the laddie for the day. Steve meanwhile is having second thoughts about joining Beth and feeling guilty about having sex with Lolly. He tells Beth that he plans to go back and that it is over between them, saying that he is just a dumb cowboy while she is a famous singer. On a side note Lachlan admits to his wife that he isn’t a true believer in their pagan religion, merely using it as a convenient tool or him to use to control the village. Lachlan is poisoning the environment via his nuclear plant. He uses ancient sun worship to rationalize his work, just as he uses Paganism to control a people damaged by radiation. He’s pulling the ultimate bait ‘n’ switch by convincing the village that religion can solve their fertility problems, when in fact it’s pollution from his own plant leaving them barren.

On the evening before the celebrations Beth is at a fancy dinner and dance and goes to sleep tired. She is given a glass of warm milk to drink by Beame, who has used sedatives in it. However Beth falls asleep and a cat in the house drinks it up, breaking the glass. The next day Beame comes to inject her with more sedatives but Beth pokes his groin with a broken glass shard. After being attended to, Beame captures her and while sedated she is dressed. Steve is led to a castle and is ripped apart & devoured by the villagers while alive. Lolly tries to get to him to warn him but is too late. At the Wicker Tree Lachlan is confronted by Beth and on knowing Steve’s death, she angrily knocks Lachlan down and burns him along with the tree. The villages stand and watch and join in a song on Beth’s prompting and then leave back to the village. Beth, seemingly safe , tries to make her way back when she meet a young boy, who leads her straight to the waiting villagers who grab her and embalm her to look forever as her best and is displayed along with previous May Queens.

The movie is black comedy and a parody of the cult favourite status of The Wicker Man. Hardy makes a movie which is neither pro-Pagan nor pro-Christian, making criticisms of both. Steve & Beth are so full of the crap that most devout Christians, especially born again ones have and view every non-Christian human as a lost soul just waiting to be saved! The Pagans meanwhile indulge the duo – almost like “oh you can talk, that’s nice!” and are all the time preparing the two for the sacrifice. Yet I wish the acting were better and we had a better story. 6.5 out of 10.