So here’s two 80s teen / high school movie icons of films that I haven’t seen before even though I’ve heard about them a lot over the years. First up is Fast Times At Ridgemont High a 1982 coming of age teen comedy written by Cameron Crowe based on his 1981 book of the same name. In 1981 Crowe, while writing for Rolling Stone magazine went undercover to at Clairemont High School in San Diego, California, and wrote about his experiences. The movie stars Sean Penn (is that really him), Judge Rhinehold, Jennifer Jason Leigh, Phoebe Cates, Robert Romanus, Brian Backer & Ray Walston. You get to see a rather young Forrest Whittaker & Eric Stoltz and a young & unknown Nicolas Cage aka Nicolas Coppola who has a minor moment in the film.

The movie is about a year in the life of high school students at Ridgemont High. 15 year old virgin Stacy Hamilton gets advice on sex & boys from her older, more sexually active & popular friend Linda who encourages her to lose her virginity and that Stacy does to 26 year old stero salesman at a baseball park at night. Stacy then is asked out by her classmate mark Ratner, who is being coached by his older friend Mike Damone – who regularly sells scalping tickets and takes bets for making money – on the ways of hitting it off with girls. Mark takes Stacy to a slightly upscale restaurant on a date and forgets his wallet, needing Mike to come and bail him out. Later at Stacy’s house the two are about to get intimate when Mark shies away and leaves after offering an excuse.

Stacy’s older brother Brad is a more popular senior who is looking forward to his last year of school and almost has his 1960 Buick LeSabre paid off. He works at a burger joint where his girlfriend also works and is dumped by her as he works up the nerve to break things off with her. Brad is fired from his job when he loses his temper with an obnoxious and impatient customer and gets a job at a pirate themed restaurant but quits at the embarrassment at having to deliver food in a pirate costume. He gets a job at a convenience store and luckily is able to foil a burglar and is soon promoted to store manager. Mike & Mark had previously used the pool at Stacy’s house with Linda (where Brad has this vision of Linda taking her wet bikini top off) but one day after school when Stacy walks with Mike to her house which leads to sex. But Mike comes too fast and unfortunately for Stacy, she becomes pregnant. She asks Mike for help he agrees to pay half the cost of an abortion and to drive her to the clinic, but reneges. Stacy gets Brad to drive her to a bowling alley and sneaks off to the abortion clinic which Brad sees and the two agree to keep it from their parents.

Word gets around school about Damone and Stacy, which leads to a confrontation between Damone and Mark in the boys’ locker room. However by the end of the movie the two friends make up. The 6th teen the film focuses on is surfer dude & habitual marijuana user Jeff Spicoli who is always late to school and who always gets into trouble with the strick history teacher Mr. Hand (played by the late Ray Walston). Mr. Hand visits Jeff’s house on gradation dance night and informs him that over the past year Spicoli has wasted about 8 hours of the teacher’s time. Mr. Hand intends to make up for it that night & they proceed to have a one-on-one session that lasts until Mr. Hand is satisfied that Spicoli has understood the lesson. Linda is dumped by her boyfriend but after talking with Stacy is reassured that life goes on. As the movie ends Mark & Stacy are making another attempt at dating. 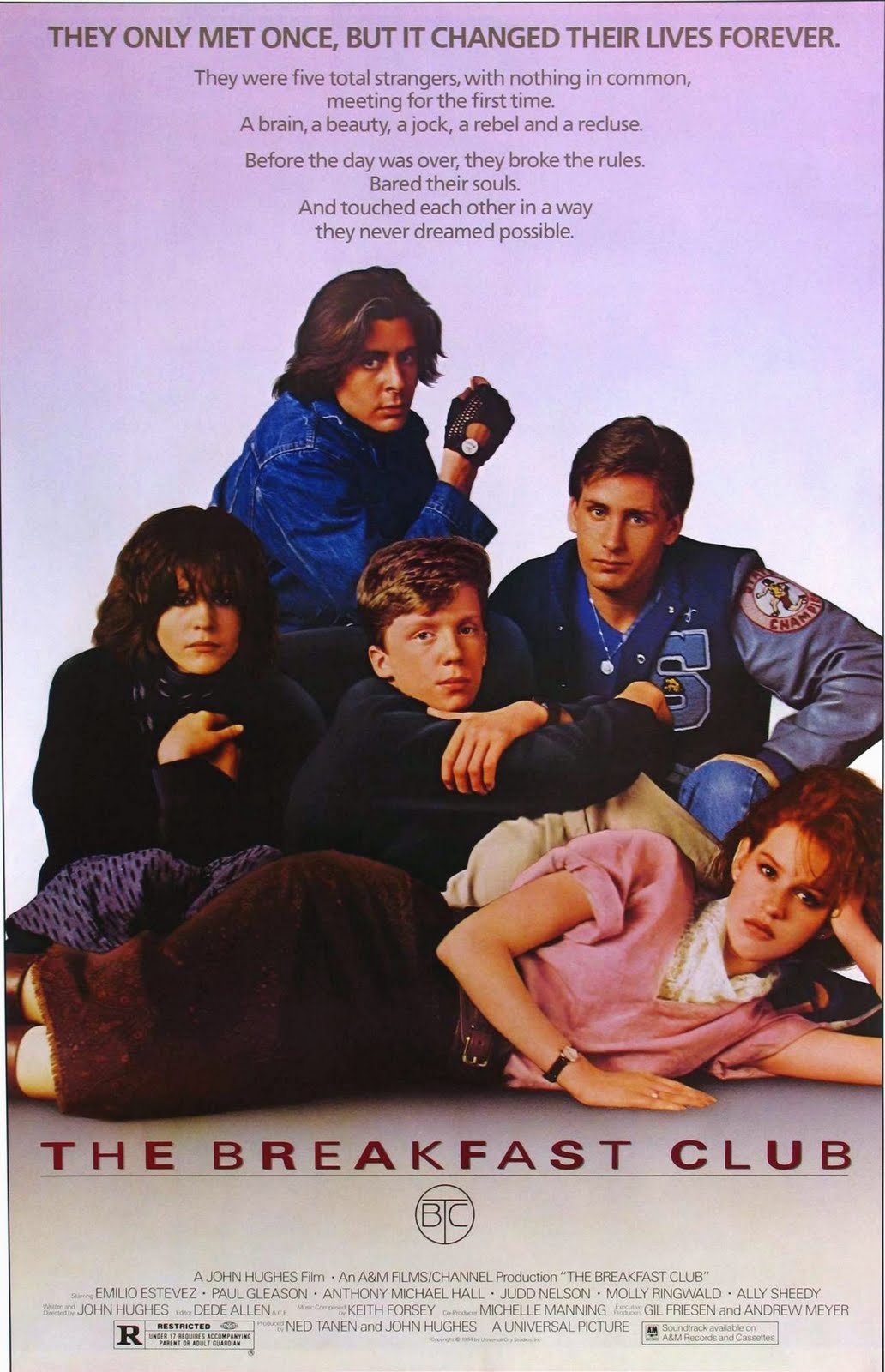 The second coming of age comedy drama is John Hughes’ The Breakfast Club starring Emilio Estevez,  Molly Ringwald, Judd Nelson, Anthony Michael Hall, Ally Sheedy with Paul Gleason & John Kapelos. The story is about 5 teenagers, each who know very little about the others, but who meet one Saturday morning at detention. Each is a member of a different clique – a princess, an athlete, a brain, a basketcase & a criminal.

5 students are in school on a Saturday morning as they have earned detention for various reasons. “criminal” John Bender, “athlete” Andrew Clark, “brain” Brian Johnson, “basket case” Allison Reynolds, and “princess” Claire Standish. Coming from different cliques each know very little about the other and they are basically strangers to one and another. At 7 :06 vice-principal Richard Vernon arrives and instructs them not to speak, move from their seats or fall asleep until 4 pm. He then gives them a 1000 word essay that each has to write about who they think they are and leaves to relax in his office across the hall. Bender, the antagonist is always fighting against Vernon, calling him names and riling up the other 4 by teasing both Brian & Andrew and harassing Claire. Allison is initially very silent except for the odd outburst.

The 5 teens smoke weed from Bender’s locker, which they sneak out to get and finally open up about their lives. Their secrets are revealed; Andrew hates his overbearing father, Bender comes from an abusive household, Brian contemplates suicide because of a lower grade that he got recently, while Claire feels she has to keep up a certain image and that she is a virgin and Allison is a compulsive liar. They realize that they all have strained relationships with their parents and fear growing up to make the same mistakes. Despite becoming close during the almost 9 hours, they fear that they will go back to their respective cliques from Monday and not speak to each other again. Bender has an altercation with Vernon which leads to him being locked up in a store room but he escapes from it through the air ducts. They kids let loose and dance letting off some steam and in the end Allison has a little make over done by Claire, making her look prettier and which catches Andrew’s eye and they kiss. Claire goes to the storage room with Bender and the two have sex before their hours are up.

the other students ask Brian to write the essay that Vernon assigned earlier. Brian does so, but instead of writing about the assigned topic, he writes a letter objecting to Vernon’s request to describe who they are, stating that the man has already judged who they are (an athlete, a basket case, a princess, a brain, and a criminal), and that he will not accept any different accounts from them. He ends the narration as signed by “The Breakfast Club” and as the movie ends the other four leave in their parents cars while Bender walks home raising his fist in the air.

2 classics that bring me back to a time gone by. I love the 80s and these are two fine examples of the lifestyle and the movie of the time. I like Fast Times a bit more than Breakfast Club. So I give Fast Times At Ridgemont High an 8.5 outta 10 and The Breakfast Club a 7.5 outta 10 – both taking into consideration what genre they are!