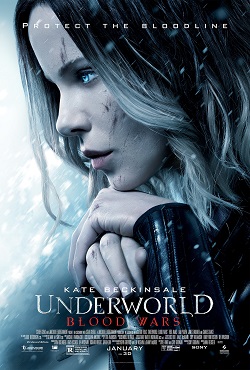 Underworld: Blood Wars is a 2016 American action horror film directed by Anna Foerster (in her feature film directorial debut). It is the fifth installment in the Underworld franchise and the sequel to Underworld: Awakening (2012), with Kate Beckinsale reprising her role as Selene. The main cast also includes Theo James, Lara Pulver, James Faulkner and Charles Dance.

Ok, so this franchise is just being dragged along for the ride. It’s lost the charm and intrigue of the first two films. I thought Underworld & Underworld : Evolution were both really good and brought some change and new life to the vampire and werewolf legends. I thoroughly enjoyed them and they stand up against numerous rewatches. Even Underworld : Rise Of The Lycans, a prequel set several years in the past was quite good. The 4th and now 5th movie pale in comparison. For one, the various vampire characters are all alike. You can interchange them in each of the movies. We have an ambitious Semira, a council member of the Eastern Coven, who schemes for power and we have the older vampire Thomas, played by Charles Dance, who helps Selene and David, his son.

We then have this weird Nordic vampire coven, filled with even more paler and blonder vampires and there is this hocus pocus mumbo jumbo thing with Selene who dies and is resurrected and David who drinks a small drop of his mother’s blood and realizes that he is the the rightful heir to the Eastern Coven as his mother was the High Elder Amelia (seen briefly in two films). Marius the Lycan leader is almost like Kraven, except as a lycan instead of a vampire and stronger. A few fight scenes are good and ofcourse I love the werewolf transformations in this franchise. But overall the film offers nothing new. In the end Semira is taken away and Marius his killed, preventing the lycans from killing the vampires. David and Selene are chosen as new members of the council.

While watching the film I kinda forget my interest in the franchise, which is funny as I was obsessed with the first film and loved the story of the second. I give it a 6 outta 10!