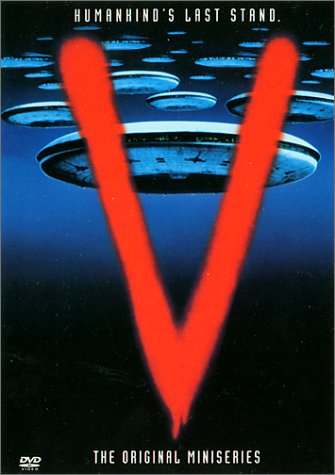 Recently I started downloading the entire V catalog via torrent files, after being hit by a wave of nostalgia on reading about the remake of the series which is being planned for a 2010 release. That got me so interested in the 1980s Sci-fi series and so I started downloading them. I’ve finished downloading & watching The Original Mini Series and it’s a lot more somber than I remember. But then ofcourse I was like 9 when they first showed it in Kuwait and I remember getting scared on watching it.

Anyways, as a lot of you Sci-fi buffs will know/remember the series is a bout this scientifically advanced alien species, who humans call Visitors, who come to Earth on the pretext of friendship and asking for supplies in exchange for sharing their much advanced technology. They look & sound a lot like us, having studied us from a far for sometime and learnt English & chosen Earth names.

However, cameraman Mike Donovan (Marc Singer) finds out the truth – behind the fake human like skin, the aliens are reptilian in apperance and eat live food like small birds & mice. Their purpose is to kill humans for food and steal all the water. While trying to broastcast the footage he shot on their mothership, Donovan is branded a hostage and he joins up with a band of resistance fighters in LA who group together to fight the visitors who have all but completed a takeover of power on earth.

Most humans live in fear while some turn collaborators to the visitors, trading information for luxuries  & wealth. Others form the resistance movement, lead in LA by the beautiful former medical student, Juliet Parrish (Faye Grant). Then there are dissidents among the visitors, labelled as the 5th Columnist, who oppose the killing of humans. Martin is one such, who befriends and helps Mike to escape the clutches of the evil Diana, Commander & Scientist.

The mini-series ends with the aliens controlling most of Earth while the resistance groups seek out bases to hide from the visitors. It is followed by another mini-series : The final battle and then the tv series.

Has there been a more hotter female villain than Diana (Jane Badler)? A lot of the women actors on V were chicks which led to the popularity of the series. I only recently came to know that the actual plan was to make a series on the rise of fascism or neo-nazis in the US. But it was later changed to a sci-fi series to please the tv station NBC.