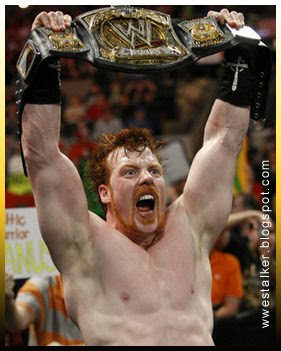 Ok, I already admitted that I don’t keep up with the dealings, comings & going in the world of wrestling like I used to and am at best a casual observer for the past 2 years but who the heck is this guy Sheamus! I mean he comes outta nowhere and wins the WWE Championship on RAW!

Pale, pasty white skinned (reminds me of toothpaste) and a mop of bright orange/red hair, the Irishman moved to the WWE in 2006 but was in the development sections till July 2009 that he got a huge push into the main WWE matches. He had feuds with Goldust and Shelton Benjamin & Jamie Noble. He made his pay-per-view debut on Survivor Series and later on RAW won a battle royal to become the #1 contender for John Cena’s WWE Championship.

On December 13, at the TLC: Tables, Ladders & Chairs pay-per-view, Sheamus defeated Cena to win the WWE Championship, his first championship in WWE, making him the first Irish-born WWE Champion. I hear he’s being taunted with chants of ‘You can’t wrestle’ in many arenas but can’t state anything as I am yet to catch one of his matches.

One thought on “Who The Hell Is Sheamus?”