The Beauty of the internet is that you can discover many, many excellent music artists / groups that you would normally find hard to find in your local store. There might be no chance of them ever coming by your neck of the woods but so what? You get to enjoy some of the best music around the world. And to hell with MTV and other channels that only play heavily hyped and marketed stuff like hip-hop and rap these days. I can’t stand to watch that stuff. But through the net I have discovered numerous artists who I now consider to be among my all-time favourites. Examples are : Big Sugar, Aaron Pritchett, Jason McCoy, Todd Kerns, Lisa Brokop, The Tragically Hip, Alexisonfire, Regina Specktor etc. The majority of these artists are Canadian – this is due to four reasons: a)Most of my online friends are Canadian, b) My fascination with Canada and Canadians in general 3) Canadian musicians are not promoted as forcefully as their American or British counterparts & foremost 4) Canadians make excellent music! 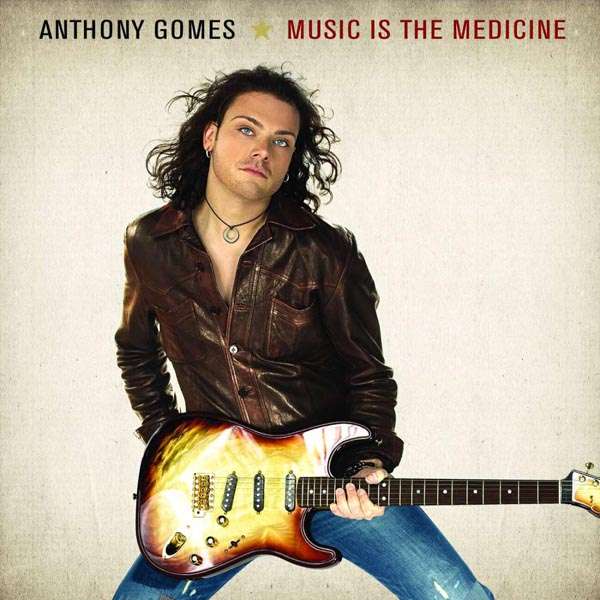 Anthony Gomes is one such artist. I have just discovered his music, quite by accident, but I am rocking out to it with loads of enjoyment & enthusiasm. To the ignorant (which included me till recently), Gomes is a Portuguese Canadian Blues-Rock guitarist / musician / singer from Toronto, Canada. He debuted his brand of music in 1997 and has released four albums in his career. He is considered among the premier guitarists in his genre and his band and he is known for their relentless touring which has garnered him a loyal fanbase. He would move to Chicago & Nashville to learn more about the roots style music & song writing that would influence his albums. The first three albums varied in their content : the first one “Blues In Technicolor” was a guitar-centric, gunslinger kinda album that showcased his chops in 1998. Then 2000 saw the mostly acoustic “Sweet Stringin’ Soul” in a more intimate setting. The next one, “Unity” came out in 2002 and was voted by some critics as one of the 30 essential blues albums of all time.

“Music Is The Medicine” starts off in a funky blues-rocker style with the title track which makes you wanna tap your feet and groove. Next track Bluebird (a symbol of happiness) is great track, with a lovely chorus section. Now She’s Gone is a lament of a man whose woman who has upped & left him and has moved on. You can dance to Stand Up – a song that tells you stand up for what you believe and back it up with action. War On War is about the current situation and is a protest song from the US situation. A declaration that the protest kind of war is the only way to fight unjust war that is the propaganda of the wealthy & powerful politicians. Love Is The Answer is request to humanity to come together in peace & love and to forget their differences.

Everyday Superstar is a funky track with r&b influences standing out strong and I just love the section in which the band does the “tadananano” part. A rockier Testify is an excuse for you to party. Waiting For A Sign is a personal look inside oneself, analysing the life you have lived. The funk is back with What If which has a groovy guitar intro that uses the wah-wah pedal effects to good but understated use. Run is a rocker with blistering guitar work, a song about bravely facing your obstacles. Album closer When The Right Woman Does You Wrong is all bar blues. You can taste the tequila shots or the whiskey bottles or the vodka & limes in the music & words. The song is about how the love of your life can hurt you and that the hurt is the worst kind that you can feel. The searing & lengthy uitar solo is done to great effect.

All said, this is a great album and one I would highly recommend to lovers of anything related to blues, r&b & rock. You can play it over and over again and never tire of it. I have already played it 6 times in two days; it is that addictive. Song for the day – “Music Is The Medicine” – ANTHONY GOMES

If, like me you were a young kid between the ages of 9-15 during the latter half of the 80’s, chances are that you were affected by the movies The Goonies when you saw it and are still nostalgic about it. This is one movie that brings back such memories. Steven Spielberg wrote the story and Chris Columbus created the screenplay based on it and it was directed by Richard Donner, who was behind movies like The Omen, Leathel Weapon & Superman (how can you go wrong with that combination?)! The Goonies are a band of kids bent on rescuing the Goon Docks in their hometown of Astoria, Oregon from demolition and they attempt to do that by finding the lost treasure of One-eyed Willie, a pirate. Mikey finds the map in his father’s attic and it leads to a tunnel in a rundown restaurant, which is also the hideout of a criminal family called the Fratellis. Once the Fratelli brothers find out what the kids are after, they and their mother also go in search of the treasure for their personal gain. One of the Goonies, Chuck, befriends the third Fratelli brother, Sloth, who is deranged and deformed but friendly to the kids. The kids have to dodge various booby traps laid by Willie and his men in the tunnels.

At the end of the tunnel they discover an old pirate ship, which houses the treasure and the skeletons of Willie and his band of pirates. As they fill their pockets with the treasure, the Fratellis reach them and steal the loot from them. A dynamite is lit, mistaken for a candle and the cave starts to collapse. The Goonies dive into the water and swim for safety. A search party led by cops finds them on the beach and they apprehend the Fratellis with help from the strong Sloth. Fortunately for them, a small bag of jewels and gems was not taken away from Mikey and they can use the money from selling it to save the docks from being demolished and made into a golf course. Willie’s ship is lost into the ocean and Chuck says that Sloth is going to stay with him & his family from now.

The film stars child actors Sean Austin (who has managed to get a decent career for himself even as a grown up) as Mikey, former child superstar and now where-is-he Corey Feldman as Clark aka Mouth, & Josh Brolin (also in Hollow Man). Joe Pantoliano is one of the villainous yet comedic Fratelli brothers. The movie was a big hit and is now also considered a cult favourite with numerous references in other movies & tv. 8 outta 10!