I was late leaving from work tonite. I hurried to the bus stop and luckily a bus came along in a minute and I was quickly on my way home. Or so I thought. The bus was quite crowded and I was standing toward the rear window. Two stops down, a passenger yelled out that his wallet was missing! Apparently he had a bit of cash in it; the amount was slightly higher than Rs.500. The bus conductor and his guys stopped the bus and the ‘victim’ got down along with a few others. The began frantically searching to see if the wallet was around. They started questioning others if they too were missing wallets and if this particular area was known for pick-pockets. It wasn’t but that meant nothing.

Since we were getting late, people started protesting, saying that the thief or thieves were now long gone so let us make a move. The ‘victim’ was having none of that and his friends said that since the police station was just around the corner, to head there. So we had to go there and the cops came onto the screen. Now, the rest of us having done quick checks to see if our own wallets were safe, were getting concerned that we would be getting home very late.

There was one young fellow who insisted that two guys had rushed from the bus a stop earlier, just before the ‘victim’ had discovered his loss. He was saying stuff about the fact that it was too late and let us go on etc. To the ‘victim’ and some others this proved to be very annoying. There were some words exchanged. A couple of minutes later, the young man looked on the ground and yelled that the wallet was lying on the bus floor. Indeed, as I looked at where he was pointing, I saw it lying there. No one was willing to touch it. At this point the ‘victim’ and his friends started getting violent with the young fellow, blaming him for stealing the wallet and then putting it down when the cops came onto the scene. He was roughly pulled out and the cops apprehended him.

The bus was now divided – half thought that he was innocent and the other half agreed that he put the wallet on the bus floor when he saw that there was no chance of him getting away with his crime. I am not sure myself of what happened but I think it is the latter. He almost got away with robbery. That was one solid half hour of entertainment.

The rest of the bus journey home was uneventful and I rushed home to get myself a nice meal and a good night’s sleep. 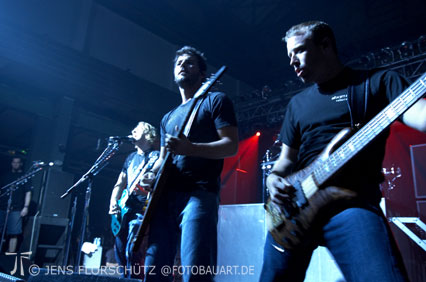 The second round of the playoffs have just finished their first games each. The Ottawa Senators narrowly beat the New Jersey Devils by 5 goals to 4. Despite having taken a commanding 4-0 lead by the end of the first period, Ottawa nearly let it slip away. First period goals by Jason Spezza, Joe Corvo, Dean McAmmond & Dany Heatley embarrassed the Devils who responded strongly in the second period. By the third period it was 4-3 and a goal by defenceman Wade Redden saved the win for Ottawa although the Devils would get one more goal.