I’m sitting at home today, having changed my mind about going out, party due to the fact that I am tired and that today is such a lazy day with the weather being cold & cloudy but no rain. And partly because I am running short of cash and want to save some just in case there is an emergency during the rest of the month. I don’t want to suddenly come up short of cash so I decided to stay home and take it easy, put my feet up and watch some clips on YouTube and listen to some music.

Nothing interesting seems to be happening today but that doesn’t mean that the last few days were short on happenings. Someone went ahead and had a hasty wedding registered and I am not sure if that was the wisest thing for her to do as there are lots of issues, but it is done and dusted now. I just hope that it turns out for the better. Things are dull at work; it’s ok for a few days but then it gets boring and later you become restless and hoping for something to happen. Another rumour about a friend of mine has been doing the rounds of the office lately. But this one seems to be more than just a rumour – I think it is true. A guy I am close with, but have known only from January, is actually married even though he told all of us here that he is a bachelor and that he wasn’t interested in getting hitched. He is now back in Bangalore and I don’t have a number to check this out with him but management has come to know about it. Oh boy!

I remember we both had a couple of conversations about marriage & family during April. He & I would sit in a corner over coffee and talk about his folks & mine and about living on your own terms and about the opposite sex. He had told me that he wasn’t interested in getting a wife, that he didn’t think he was the marrying kind and that he couldn’t stand being tied to just one woman. He talked about this girl who he was sleeping with but that could possibly be his wife. And the thing is he was going around with another girl here! And she thinks that this wife thing is just a rumour! I dunno what the hell is going on! Am I the only decent guy around? :P 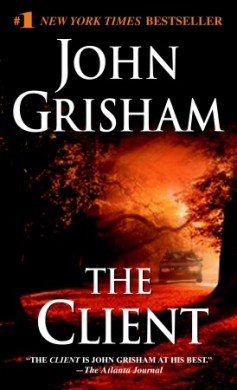 The Client is probably the best novel by authour John Grisham and one of my favourite books of all time. You may have seen the movie or read the book already, as it was so popular. It starts with two young brothers who sneak off to the woods to smoke cigarettes. They witness a man in a car attempting suicide by plugging a hose to the exhaust and leaving the other end in the car. Mark, the older brother tries to stop the suicide but gets caught by the man, lawyer Jerome Clifford, who pulls Mark into the car with him. He tells Mark, while babbling away drunk, the location of the body of a dead Senator, who was murdered by his client Barry Muldano. Jerome then kills himself a little later as Mark escapes. Mark’s younger brother, Ricky goes into shock and is taken to the hospital by Mark and his mother. Soon Mark is caught between the cops & the FBI on one side and Muldano’s Mafia goons on the other.

This proves too much for tough Mark to handle and he goes to a lawyer, Reggie Love, who specializes in helping young kids in trouble. She ensures Mark’s safety but is frustrated that the law states that Mark will have to give out the location of the dead body or be kept in a juvenile facility. Thinking that the law is not fair, Mark stages his escape and along with Reggie goes to New Orleans to find the body and to see if it actually is there. Mark & his family’s only option now is to agree to the witness protection program, which will keep him safe from the Mafia. He is sad when he realizes that this also means he will probably never see Reggie again.

This is an excellent book with a story, so wonderfully told, at times suspense, at times drama, at times funny & at times sad. One of the best.