In a few days we will be observing the 6th Anniversary of the destruction of the Twin Towers of the World Trade Center. Many questions still remain unanswered and there are mysteries covered all over. I was sent this in an email by a colleague and it seems to have struck a chord in several people. Try it out:

Open Microsoft Word and do the following:

You will get this –

Plane crash, into the twin towers & death caused by the Star Of David (Symbol on the flag of Israel).

A little creepy isn’t it? 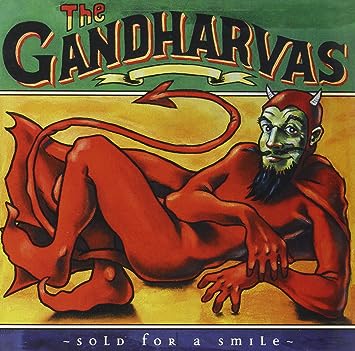 So this is the second album that I have of the Gandharvas, their third overall release. Released in 1997, Sold For A Smile is proof that the London, Ontario band were on the verge of great things. There are many instantly hummable tracks and the bands excel at that kind of no frills rock n’roll/alternative that was the rage during the early to mid 1990s. I guess you can find, in their music, traces of Blind Melon, Aerosmith & Perry Farrell like vocals. Anyways, this is a good album, I first started hearing in 2002 and enjoy it as much now. I lost my original copy and was able to download the songs as mp3s, so I guess it deserves a review over here.

The album starts with one of their hits, Downtime, an up-tempo rocker and feel good song with wavy guitar riffs throughout the track. It’s a song about forgetting what others think of you and to do what you think is best. Stick to your guns, so to speak. Gonna Be Loose is the second track. Shells is a slightly slower number with some deft keyboards and cool guitar breaks, that ends kinda abruptly. And I get a slight Beatles feel over the song. Then you get the raucous Waiting For Something To Happen, with singer Paul Jago singing in a semi-narrative style for the first verse, then screams part of the vocals and then goes more gentler and back and forth. The album title comes from a line in this track.

Hammer In A Shell is a more playful song – “swinging her hips like ringing a bell, swing a hammer in a shell” – and is basically about this girl! Watching The Girl is a great track and probably the best on this album, although not the most famous. Sasparilla is the bands tribute to punk rock, which builds in intensity during the bridge / chorus and a song made for moshing. Into The Mainstream is a bit more ominous that most of the songs and features crashing guitars and frentic drumming and the singer stretching his vocals.

You then get Milk Ocean a bit more, dare I say it, sensous and a bit sexual as well. The Gandharvas don’t write any love songs for sure! The guitars sure are dreamy in this track and the vocals, at that point, add to the effect. A pause and then the singer becomes more intense as the song draws to a climax. Oh you want ATTITUDE? You got it, in the form of Diabalony an in-you-face, rampant & rebellious abusive track, filled with the word fuck! Some versions of the album ends with a fantastic, rocker version of Cindi Lauper’s Time After Time, which many have stated they like better than the original. It sure is a great track with a great guitar solo, the last official song on their discography.

I’m sure you can still find this album on online store, downloadable mp3 formats for a nominal fee. i know who killed me movie