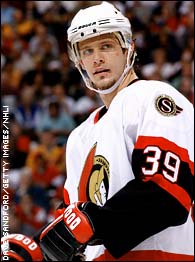 Some signing on news for the Ottawa Senators faithful. Top line center & playmaker for the Sens, Jason Spezza has re-signed with the team for 7 years, as announced by General Manager Brian Murray. The Toronto native has a total of 83 goals and 183 assists in 256 regular-season games since suiting up for his first NHL game against the Boston Bruins on Oct. 24, 2002. Spezza had season career highs in assists and points in 2005-06 â€“ 19 goals, 71 assists for 90 points â€“ and reached the 30-goal plateau for the first time in a season with 34 goals in 67 games in 2006-07. Spezza, drafted second overall by Ottawa in 2001, has been in the Senatorsâ€™ top four in scoring in each of his last three seasons, and the NHLâ€™s top 15 during the last two. In playoff action, Spezza has 13 goals, 25 assists for 38 points in 36 games. He was tied for first in team scoring with linemates Alfredsson and Heatley â€“ 22 points â€“ during the Senatorsâ€™ longest playoff run and first appearance in a Stanley Cup final last spring. The three were also tied for first in scoring in the NHL during the playoffs.

The 2014 World Cup was scheduled to be held in South America, that continent due to host the most popular & biggest sporting tournament in the world. The last time the continent hosted one was 1978 in Argentina!

And the winner is Brazil!

I’m no fan of Brazilian football! No way that I’m gonna support those over-paid, over hyped, single named, cry babies & divers! I hope they lose in the first round and finish last in their group!

I just read about the death of singer / actor Robert Goulet, who sparkled in tv, film, stage & radio winning a Grammy & a Tony award. Goulet, born in the US and raised partyly in Canada, died on October 30th while waiting for a lung transplant. I will forever remember Robert Goulet for his role in the funny cop movie Naked Gun 2 1/2 : The Smell Of Fear and the numerous tv specials & appearances that he made throughout his career. It seems weird that he is not going to headline Broadway anymore!