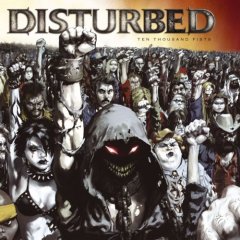 As stated yesterday, I knew very little about Chicago hard rock / metal band Disturbed. I had seen probably a couple of their videos on Channel V or MTv but the main reason I knew about this band was because of the song Stricken which is rocking and intense and every right to be called ‘disturbed’! I heard a couple more songs and I was convinced enough to try and get the band’s 2005 release 10000 Fists. And disappointed I was not – this album is filled with rolling thunder drums, pounding bass and really good guitar solos & riffs to make your heart beat faster. According to some long time fans of the Chicago band, this album’s material is more mature & complex than their previous work, evolving as they say. So let’s see what they have to offer us!

10000 Fists, an anthem for the generation of frustrated & deprived and for people who have been held back. Just Stop is telling someone who is constantly criticizing you to just back off and telling that person what you are capable of doing if only he / she would stop. Guarded is a song about someone who is scared of sharing their feelings. The person is keeping away from intimacy and opening up to anyone in the fear that it will come back and haunt them much later. The song is a plea to not be guarded and to start trusting. Deify can be taken in two ways – it can be about a relationship that was about the singer be totally devoted to his spouse and how he “deified” that person so much and is now depressed that the person turned out to so beneath himself. And for speaking out, the speaker is being chastised.

Or you can look at the lyrical meaning of believing in a guru or a god and finding out that the messiah is not true. I like this meaning much better. Stricken is their best song and about being unable to let go of a person even if things are going so bad. Even though the person does all these things and is complaining and the singer wants to leave, he knows that he will still come back.

Then comes an ultra-cool version of Genesis’ Land Of Confusion – a surprise choice by the band. I mean, I love the song, I think its so appropriate for our times, perhaps more so now than it was in the 80s. I remember the 80s as being more of a time of innocence. Watch the video that Todd McFarlane made to promote Disturbed’s version of the song.

I’m Alive, Son Of A Plunder, Overburdened, Decadence & Forgiven follow the similar lines of anger & frustration and retaliation. They make for some good aggressive songs.Â  I mean, it didn’t seem to me that the members of Disturbed would listen to Gensis but then I do, so…. Anyways, Sacred Life, Pain Redefined and the politically charged Avarice end the album , which is so growing on me. I really like the band and the album. Go get it!