Well in the end it’s 5 of my trainers who have decided to leave. 5 out of 6! Best thing is that these 5 are all getting a package 100% more than what they were getting here. Where else can you find a 100% hike opportunity?

Today was the last day for my ‘annankunju’, Rashba, my youngest team member and I’m gonna miss her a lot. She and her best friend, who works in the quality, department are making the move together and that is good for the both of them. She completed the exit formalities and signed everything and then by 3 pm she took her leave of us. I teared up as I said goodbye and she wiped my tears (I’m 9 years older and I’m the one who’s crying and it’s her who is wiping my tears!) as I asked her to keep in touch and email often.

She asked me to try to move to the new company that she and the others are moving to. I made a vague promise of trying and told her to be careful and take care. She’s coming back to Cochin in 2 months and we will get together for a lunch or something. I hope she does well.

So that’s one down – another guy leaves tomorrow and the third the day after. The final two will wait till the 25th of the month to leave. 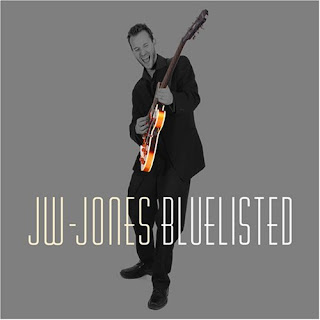 From the Canadian capital of Ottawa, comes JW Jones, a blues singer & guitarist of a more traditional Chicago blues sound. In the last decade, he has released five albums and played in 13 countries, 4 continents, over 200 cities and over 800 club and festival appearances. He plays with a no frills all feel approach to his guitar playing.

Alright, let the music hit me! A cool sounding Double Eyed Whammy comes rushing through your speakers. It’s a fun sounding tune about a terrific woman that the singer wants to make his own. Looking The World Straight In The Eye is a combination of funk & RnB with maturity showing in the vocals and great guitar playing. Can’t Play A Playboy reminds me of 1950s flicks of street fights & gangs (in musicals ofcourse). The song is basically a warning to not play around with the protagonist. Similarly Mad About You sounds like it could have been off the soundtrack of movies like Grease!

Wasted Life is a lament about times & opportunity gone by on which guest guitarist Little Charlie Baty noodles out his jazzy style. Somebody’s Got To Burn is a darker song on vengeance with some intense riffing. Heavy Dosage, a West Coast swing number, allows Jones & his guest guitarists Baty & Junior Watson and the rhythm section to just stretch out into a jazz & swing vibe and belt out an instrumental. That’s Wrong Little Mama is a cover of a BB King original. Waiting On You is about waiting & getting impatient for your woman to get ready to have fun.

The Doctor is a fun danceable track about falling in love with a …… you guessed it, a doctor! In Out Of Service harmonica support this song about the cell phone blues. Anyone who waited for a call from their lover can relate. Bogart Bounces Again is a good instrumental lead by guitar but amiably supported by the drums, keys & bass and you can hear a horn section here & there. Silent Treatment & Tickets On Yourself bring the rear section of the cd and prove that there’s not a weak link in the entire lot.