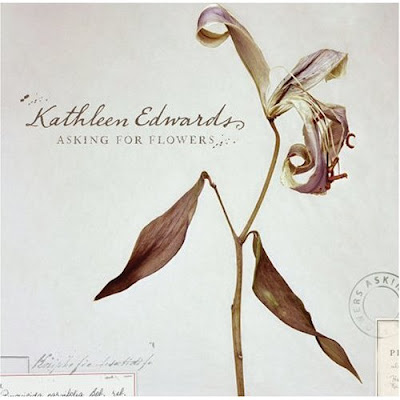 Asking For Flowers is Canadian alt-country singer Kathleen Edwards’s 3rd album, which was described as her finest work yet. I tend to agree. The 11 songs that she has crafted & sung for us on the album is some fine work by the Ottawa native indeed!

We start off with a song about being down on your luck in Buffalo, a song of going across the border to the US with your lover and then getting stuck and needing to get back. The Cheapest Key is Kathleen’s attempt at a pop-rock song and she does it better than most. An uptempo number about musicians and worshipping a rocker, it’s a crowd favourite.

Asking For Flowers, the title track, is a bitter look back at a relationship that was never on equal terms and has reached it’s end. The singer is bitter that her spouse/partner hadn’t been more engaged in their life and appreciative of her. Alicia Ross is about a girl, who was killed by her next dooor neighbour, and her case was well known in the media. Edwards sings the song from the perspective of the young woman during the last moments of her life and it’s mostly address to her mother.

Edwards best song ever, not just on this album, is the wonderful I Make The Dough, You Get The Glory – a song about friendship between two band mates. However one friend shines in the spotlight yet the other does a lot of the dirty work but gets very little credit. Edwards compares this duo with many things including the Great one, Wayne Gretsky, an NHL demi-god and his teammate Marty McSorley who was an enforcer assigned to protect the star.

Oil Man’s War is about a draft dodger who doesn’t want to go to Iraq and who leaves for Canada with his girlfriend. Sure As Shit is about a relationship.  Run is about a mother singing to her daughter on the eve of her wedding and giving a little warning about life. Oh Canada is a bitter song to Edwards’s countrymen to not look into the race or colour of a person before caring for them. Scared Of The Dark and Goodnight, California close out this mostly sombre record.

Since I’ve already posted the video for the song much earlier, here’s a live rendition of I Make The Dough, You Get The Glory!

I’m a little upset with my dad at the moment. He broke my crystal trophy that I had received from the clients at a recent R&R ceremony event that took place on the 29th of June.

It’s not a big deal but…I’ve never won anything or had something this nice given to me as a token of appreciation for my work and a committment to getting results, which is what the award was for. It wasn’t a very expensive or flashy looking thing but it was nice enough. I placed it in the living room next to their tv so that they could show it to people who come in and be a little proud of me.

And now the crystal peice on top, shaped like a big diamond, has broken of the long pedastal and I’ll have to try and make it stick with some glue. I feel so upset about it – I wanted to keep it when I finally do move to my own place (whenever the fuck that is going to be). I guess I can try to win another award!

Having my first cup of black coffee on a cold & windy Sunday morning. Sip…ugh!

I seem to have lost my black coffee making skills. The last few days, whenever I’ve made a cup of coffee for myself, it either turns out to be too sweet or too strong & bitter.

What’s wrong and how could I have lost the skills? It’s the spoon! Is it the spoon? I’m using a different spoon for the coffee powder – that must be it. Can you blame the spoon for the weird tasting coffee? Maybe I should try milk with coffee.