I’ve had the phone for 17 days now so I think it’s high time that I posted a proper review from my experiences. Right up front let me tell you that I absolutely, positively love this phone. Back in 2007 Jan I had included, among other things, getting a BlackBerry as one of my New Year’s resolutions. I didn’t know at the time that it would take me 3 whole years to do so!

Ok, first the colour – the silver edition is the one that I have. If I’m not mistaken, this is the default look of the Curve 83xx series and then they make different colour cases as and when the mobile carrier companies request them. I had preferred the red and the sapphire blue colours or maybe a black one but the shop where I bought this from didn’t have any of those. In fact they only had 3 pieces left, 2 silver and 1 pale gold; but I hate the pale gold colour and so silver it is.

I love the look and feel of the phone. Silver is cool; I have on wallpaper on which accents the silver look of the phone and so it looks awesome. I might look at getting some extra panels for it – if they have them in red and dark blue that would be nice. 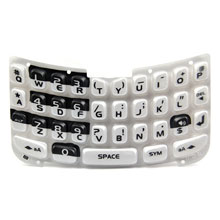 I love the full Qwerty keypad although it did get some t getting used to. Especially the Alt, Caps and Symbols keys. I get confused with them even now but it’s not anything serious. I now use the Enter a lot. Texting, sending emails or messages is a cinch on this device as long as you do a little bit of unlearning from using a standard phone like the Nokia or the Samsung phones. I love using the BlackBerry Messenger service although I currently only have one contact on it – my cousin Raju.

Email is a breeze, although it does get annoyingly addictive. I can never wait a second longer after getting the alert tone and I need to immediately open it up. I have setup my Gmail, Hotmail and my office mail accounts on the phone and so you can imagine that I end up getting quite a few emails in a day. I didn’t like how emails and SMSes were getting saved in the same folder so I separated them from day 1.

I like the camera option, which is 2.0 megapixels. It takes decent pictures and I know it isn’t a higher definition one the way that I would have liked (atleast 5 megs) but I guess it will have to do. I haven’t yet taken a video on it yet, just haven’t gotten used to doing that as of now, or viewed videos on it. I have however seen videos on my colleagues 8310 phone (a Tom & Jerry cartoon) and it’ s pretty good. I have however copied a bunch of songs onto the 1 GB media card that comes with the phone and the quality of the playback option with the headphones is awesome. I think they could have improved the speaker quality on the phone but you can’t have everything.

Ah yes the trackball. Loved by some, maligned by others. The Curve’s trackball is much like the underside ball of your old PC mouse before the mouse moved to laser. I have had some issues with it but too much that I am bothered by it. The newer models of BlackBerrys come with a trackpad and I guess that is a better option. However I do like the trackball – except that using it to browse through a lengthy webpage can be a pain in the…finger!

Which bring me to the next part – the internet. I’ve already posted about trying out the Wi-Fi option. I really like the default BlackBerry browser that comes with the phone. I’ve not faced any issues with it. I did not however like the Opera Mini browser that so many people have raved about. I’m an Opera user occassionally on my PC and since I like it, I thought that the Mini must be great to browse on too. But I did not like the zoom option on the Mini and after trying the browser for 10 days, I deleted it today.

I love BlackBerry App World – it’s really cool and user friendly. I downloaded the latest Messenger version & an app from Goal.com through the App World. I was looking for some themes for the Curve and I did get a couple of hockey themes and a really cool Star Trek 2009 theme.

What else? I like the calendar option and the alarm (I use it daily) and the brick breaker game. The latter is very addictive and so be advised before you start playing it :) I guess that’s it. This is a really cool phone and I love it. I haven’t had any problems with it except for a low battery life but I think it’s because I use a lot of apps. I know that this phone came out in 2007-08 and so isn’t considered new by any standards and especially since RIM have launched quite a few more models since then. But I treasure it and already it’s a big part of my life. Thanks RIM.