I’m down and almost out.

I was ok this morning when I left for work but I fell ill within an hour. The AC is kept at a very high temperature and by 11 am I was sure that I was gonna catch a bad cold. And sure enough I started sneezing away to glory.

I was sneezing and sneezing so much that at one point I notice my brain come outta my nose. At a later stage I saw that that the force of my sneezes had moved my chair (on wheels) to quite a distance! At lunch time I thought that a good hot meal may take care of it but the rice was cold and the chicken gravy was just warm.

I couldn’t take it any more but decided to stay and complete the more important work. By 5:15 pm I took a company cab and got dropped home. We had to take a different (read that as long) route as there was a traffic block and I ended up taking a nap in the car. One cup of strong black coffee has not done it’s job either. Gonna nap for some more time. 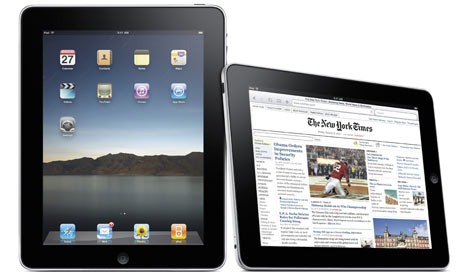 The menstrual jokes apart, I did look forward to hearing, seeing & getting to know the iPad from Apple. It feels like a great idea and we can finally carry a gadget around like the scientists we see in Sci-fi movies and tv shows.

Starting from $499 customers can get the iPad, similar to the iPhone shape but larger in size. The iPad has a 9.7-inch touch screen, is a half-inch thick, weighs 1.5 pounds and comes with 16, 32 or 64 gigabytes of flash memory storage. It comes with Wi-Fi and Bluetooth connectivity built in. Steve Jobs says the device has a battery that lasts 10 hours and can sit for a month on standby without needing a charge. The basic iPad models will cost $499, $599 and $699, depending on the storage size, when it comes out worldwide in March.

Apple will also sell a version with data plans from AT&T Inc. in the U.S.: $14.99 per month for 250 megabytes of data, or $29.99 for unlimited usage. Neither will require a long-term service contract. Those 3G iPad models will cost more — $629, $729 and $829, depending on the amount of memory — and will be out in April. International cellular data details have not yet been announced. It does not however have a camera and does not offer voice calls. Network will be GSM only.

Is it worth it? Personally I am not one of the hordes of salivating Apple geeks (I’m smiling thinking of the comments that may come my way) who’s main source of motivation in life is waiting for the next goodie to be released by Jobs and co – but it does look cool. Although I do not know how practical it would be for the average Joe (err..or average Arun) to be carrying this tablet around. We’ll see once it hits the mainstream market. Not sure when that will happen in India.