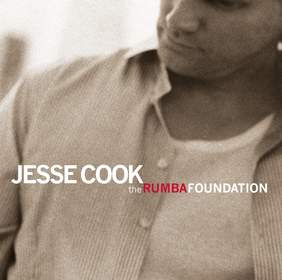 Firmly established as an icon & leading member of the rumba &  Nouveau flamenco brand of world music, Jesse Cook brought forth The Rumba Foundation. Released last year the cd continues Jesse Cook’s journey across time, space and sound.  Jesse melds his trademark rumba flamenco style with the music of Cuba, Haiti and Columbia, among others. With all of the dazzling instrumental pyrotechnics he employs, Jesse’s emphasis is always on the melody and the infectious rhythms that make him an airplay favorite. The album sounds very South American in style as Cuban & African music mixes with exotic Spanish guitar of Mediterranean, rumba flamenco, pop and world tones.

Let’s get things rolling, as you listen to Bogota By Bus, you get the image of a fun & energetic journey by bus with the travelers singing & playing their instruments and dancing to the beat. Compared to the flirty & cheerful opening track, Santa Marta is a lot more melancholic; visions of longing for a seaside town with family & friends waiting for us float through my mind as the melodic guitar licks fill the air. Tuesday’s Child starts off with sounds of a toddler in the background and then the moody music picks off.

Manolo’s Lament is the next track; again brings us the Latin world of fish boats and sea side towns. After flexing his guitar strings in the 27 second Improv 1, come the mid-tempo La Rumba De’el Jefe, a wonderful piece of musical restraint.  After the brief 16 second Improv 2, we waltz into Gaita with it’s strong rhythm section and lovely melody. We slow things down for the ethereal Rain Day and it’s feeling of loneliness.

The last three songs  – a middle eastern sounding Bombay Diner that creates images of a bustling neighbourhood with people mingling about, Afternoon At Satie’s which is a gentle intimate affair & the totally fun & sing-a-long version of Paul Simon’s Cecilia – are probably the best tracks on the album with the exception of the opening song. Great way to end the album and you’ll be hitting the play button many times over.

A movie from my childhood days always brings a smile to my face. Now, this movie, Secret Admirer was released in 1985 but I would have seen it probably around 1988-89. It remains an icon of the 80s directed by David Greenwalt starring C. Thomas Howell, Lori Loughlin, Kelly Preston and Fred Ward. The original music score was composed by Jan Hammer.

The movie is about Michael (Howell) an almost 16 year old high school student who has this big crush for the prom queen & hot babe Debbie (Kelly Preston). He gets an anonymous love letter slid into his locker on the last day of school, which his friends lead him to believe was written by his crush, Debbie. However, it is actually written by Michael’s best friend, the pretty Toni (Lori Loughlin)! Michael writes a letter back and asks Toni to give it to Debbie. Toni opens the letter, which is basically lines from cards, tears it up an writes another letter and gives it to Debbie instead.

Debbie, who is going out with college jock, Steve, falls head over heels for the way the letter is written and wants to meet her admirer. She & Michael meet and they start going out. Now here is the fun & confused part – Michael’s kid brother Jeff (the late Corey Haim), while stealing some money from his brother, reads the letter and places it in his dad’s book. Their mom, Connie finds the letter and assumes that her husband George is having an affair. George, gives his book to his night class teacher, Elizabeth (Debbie’s mom) and only sees the letter when he gets the book back. Now he thinks that Elizabeth has a crush on him.

Debbie, in order to hide the letter Michael wrote to her, puts it in her mom’s bag. Her dad, Lou a cop, finds it and assumes that his wife is having an affair. One thing leads to another and George & Elizabeth go out on a date with Lou spying on them. They call it off when they find Debbie (with a topless scene by the sexy Preston) & Michael making out in the car next to them. Lou goes to Connie and tells her about the affair and they have a brief making out session to spite George & Elizabeth. Confused?

Meanwhile Debbie & Michael hit it off and go on their date and make out. However Michael soon realizes that dating her is very superficial. They try to have sex on his birthday, much to the disappointment of Toni, but call it off when it doesn’t go right. Toni is upset with Michael but doesn’t tell him about her true feelings and is going off on a year’s educational trip on a ship. Michael realizes that he has feelings for Toni and when he matches the two letters together understands that it was Toni who was his secret admirer and not Debbie.

Debbie is upset and breaks it off with Michael. Both of them confront their respective parents, who are busy accusing their partners with the letters, and the confusion is sorted out. Michael goes to beg Toni not to leave and tells her that he knows it was she who wrote the letters all along. He tells her that he loves her and she jumps off the ship and the two kiss. Funny movie and it’s worth watch a few times. 7 outta 10!