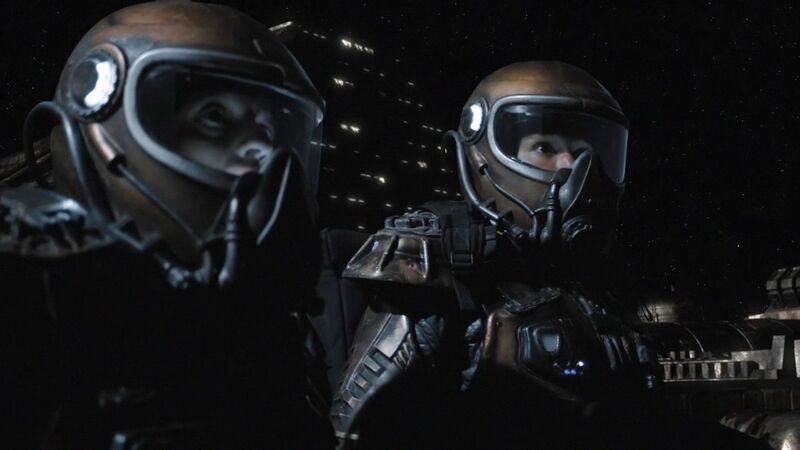 After Space, the divisions between the crew of the Destiny becomes very obvious and to the forefront. Chloe suffers a nightmare that brings back her memories of the abduction by the blue aliens. Camile’s people join Rush and tae advantage of the absence of Young & Scott – who have taken a shuttle to take a look at the ship’s hull & to dislodge & destroy a alien fighter, which has docked on Destiny – and take control of the ship.

Rush has control of most of the vital systems. He seals off a series of doors, creating two separate sections of the ship; one side has the civilians, while the other contains the military. Young, Scott and Greer are with Eli in the control interface room, which is on the military side of the ship. There, Eli discovers that Rush stopped the transfer prematurely, preventing him from taking control of the ship’s life support. Young radios Rush and notes that he has his full attention, and wishes to hear Rush’s demands. Rush asks that all military personnel are to relinquish their weapons, and submit to civilian authority, since he believes that Young is running the Expedition like a military dictatorship. When Young points out that Eli has control of life support, Rush counters with the fact that, since their side of the ship is much larger, and they have the hydroponics lab that is supplying some oxygen, it would take three days for the air supply to diminish completely. By this time, dehydration would claim those on Young’s side, and no side would win.

Slowly and methodically the military takes back control of the ship. It is also discovered that the blue aliens had placed a tracking device into the flesh of Dr. Rush. Using some of the venom of the alien on the planet that they had visited, TJ removes the tracking device from Rush and destroys it. After the ship jumps off into ftl, Young orders all the civilians back to their quarters. His brief talk with Camile indicates that the struggle for power isn’t done and that leaving Rush on the alien planet wasn’t a good idea.

Defunct for a few years, The Gandharvas had some cool quirky songs like Downtime.