Another quite 2 day weekend comes to a close. I did have some plans for these two days but I didn’t follow through. Let’s see now, I started it on Friday night, heading straight to Coffee Beanz for a big cup of cold coffee with cookie chunks in it and watching the Slovenia vs USA 2-2 draw on their tv. I guess the people who run the coffeeshop should be clever and instead of showing the games on the smaller 21 inch tv, they should be showing on the huge lcd Samsung that they have. It’s about 30 inches or so but all they show on it are adds and movie trailers.

An hour or so there, I came back home and watched 90210 (kinda addicted to it). The very next evening it was the season finale of the show. Saturday morning I woke up very late and spent it at home. I downloaded Skype for the first time and installed it. I also tried out my laptop’s integrated webcam for the first time along with Skype by chatting for an hour or so with my cousin Sandhya who is in South Korea. That night I sent out for some pepperoni and cheese pizza from Dominos. Delicious and delicious! I love pepperoni.

More tv watching and watching downloaded tv series on my lappy. Today was more of the same; it was a gorgeous morning with some sunshine and a good breeze but by evening it became hot. It might rain tonight, probably thunder & lightning too. Lots of coffee drinking and relaxing. Can’t complain too  much. How was your weekend? 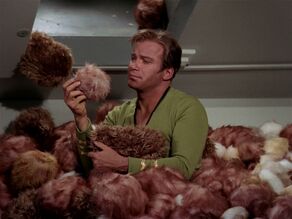 One of the best episodes in any of the Star Trek franchises, and certainly one of the funniest, The Trouble With Tribbles takes place on Deep Space Station 7 in a section of space that has a disputed planet – disputed between the Federation and the Klingon Empire. According to the Organian treaty, each side is given a chance to show who is better suited to develop the planet’s resources. The Enterprise answers an emergency hail from DS7 but Captain Kirk is annoyed to find out that the alarm was raised to protect the storage of a grain, the only kind which can be grown on the planet. On orders from an admiral Kirk is forced to place guards to protect the grain. Meanwhile the Klingons appear, headed by Captain Koloth (played by William Campbell).

The Klingons claim that they are for shore leave and Kirk reluctantly allows them to send down only 12 soldiers at a time and he also allows his own crew to take shore leave on the station. While at the station’s bar, Uhura is gifted a tribble, a small furry creature that seems to purr in a manner that makes humans (and Spock too even though he won’t admit it) calm and affectionate towards the creatures. Unfortunately, feeding it only creates a problem – the tribbles multiply like crazy. Each tribble can deliver 10 at a time and soon they are all over the station and the ship.

While on shore leave Scotty & Chekov get into a bar room brawl with Koloth’s first officer Korax and it develops into a big fight between the humans and the Klingons. Funny part – when a drunk Korax insults Kirk, Scotty restrains Chekov from hitting the Klingon but when the drunk officer insults the Enterprise twice Scotty hit him. Equally funny is when Scotty admits to throwing the first punch and the bemused and embarrassed look on Kirk’s face when he finds out that insulting him was a lesser sin for Scotty than insulting the ship!

The humour carries on to the interaction between Kirk and Nilz Baris, a Federation official in charge of the planet development project. And the reactions to seeing lots of tribbles on the ship including the bridge. It also seems that the tribbles seem to like humans and Vulcans but do not like Klingons. This is crucial in unmasking Baris’ assistant Arne Darvin as a Klingon spy – the tribbles emit a shrill sound when in proximity to him just as they do with all Klingons. In turn the noise they make seems to make the Klingons nervous. Hence at the end, Scotty beams all the tribbles from their ship…onto the Klingon ship!

Truly classic episode and it has it’s fans far and wide. A must watch for anyone even if you are not a Star Trek fan.