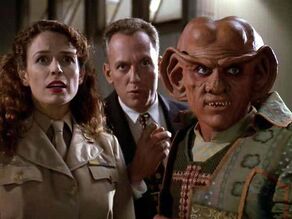 A huge favourite of Star Trek & DS9 fans in particular, I just watched the season 4 episode Little Green Men last night post download. This episode is very Quark centric, along with Nog & Rom. The premise of the episode is that Quark takes his nephew Nog & his brother Rom on a newly gifted Ferengi shuttle from DS9 to Earth, as Nog is entering Starfleet Academy. After a going away party for Nog, where the young cadet also sells of some of his belongings in order to raise some capital, Quark takes Nog & Rom aboard his new seemingly perfect little shuttle.

He has also stashed away a load of kemocite which he plans to trade at a sizeable profit once Nog has been safely deposited on Earth. However, as the reach Earth Rom finds out that the ship was sabotaged; Rom says that if he can flood the cargo hold with plasma, its reaction with the kemocite should allow him to shut down the warp core. They do so but the reaction is that they also get transorted into the past – 1947 to be exact. They land on Earth unconscious and are found by the US army.

Now 1947 humans haven’t met any Ferengi or any other aliens and initially only the scientist on the base and his fiance nurse wish to communicate with them and gain new knowledge. The army men are a whole lot more suspicious and would like to know if they have any weapons and whether there is any immediate danger to Earth in the form of an alien attack. And the universal translators do not work  at first making communication extremely tough. Frightened at first and unsure of what to do, Quark becomes more confident when the translators are fixed and the humans and Ferengi can now understand each other. Quark is sure that he can manipulate this event into his benefit and profit from the greed in humans during that period of Earth’s history.

Only the scientist and the nurse are interested in the Ferengi for good will & learning new things. The military later turns hostile and it looks like their plans for the aliens might not be good at all. However the 3 Ferengi are saved by the intervention of Odo – the shapeshifter has snuck into their shuttle in order to keep an eye on Quark and now helps them to escape back to their ship. The scientist and the nurse come to their aid as well and soon the 4 non-humans are back in the shuttle and on their way back. They usean atomic explosion to ignite the kemocite in the same way and make their way back to their own time. Nog is dropped off at Starfleet academy and Quark, Rom & Odo go back to DS9.

While entirely entertaining and funny this episode lacks credible content towards the end. It seems rushed and is too quick to resolve all the issues. This should have ideally been a 2 part or 3 part episode arc with lots more interaction between the 1947 humans and the 3 Feregis plus Odo helping them out.  The solution was too easy in the end and it left me feeling incomplete once I watched it. Don’t get me wrong, it still is a very good episode but it could have been better.

The Most Evolved a brilliant Spanish guitar solo composition by American guitarist John H Clarke. I just discovered his music on Monday and have enjoyed listening to this track in particular.