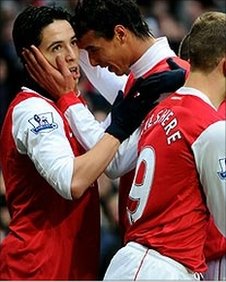 I gotta admit; this was a very exciting attacking game for long periods and I certainly enjoyed it. Full credit to Fulham players who took the game to Arsenal and never let up during the 90 minutes of football.

But it was Samir Nasri who stole the show, the spotlights, the whole she-bang with two goals. The Frenchman lashed the hosts into an early lead after dancing inside two defenders before the Gunners wasted a host of chances to extend their lead. A clash of heads affecting Arsenal’s Laurent Koscielny let Diomansy Kamara slot a slick but contested equaliser.

But Nasri decided the match late on after jinking past a posse of defenders to slip the ball home from an angle. It was a beautiful goal, a highlight reel event, gorgeous to behold and a joy to every Gunners fan. When the ball went that far, I thought the chance was lost, as must most of the onlookers thought. But someone forgot to tell Nasri. He turned and shot the ball past the goalie and a lunging defender.

Thanks to French international Nasri, who now has 11 goals from midfield this season, Arsenal have moved to the top of the Premier League – one point clear of Manchester United – as they put rare back-to-back home defeats behind them, albeit in nervous fashion.