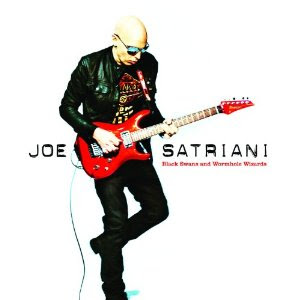 I’ve been a big Joe Satriani fan for 18 years. He is easily my favourite guitarist, musician and solo artist out there – of all time. I have all of his albums and listen to them continuously and I keep watching clips of his live recordings a lot. The Scifi inspired titled Black Swans And Wormhole Wizards is his 14th studio album of original material, released on October 5th of 2010. Joining him in creating his latest masterpiece are Allen Whitman – bass guitar, Mike Keneally – keyboards & the faithful & masterful Jeff Campitelli – drums, percussion.

The first track sounds much like it could be the theme music to an adventurous scifi tv series – Premonition is mid tempo based and the keyboards are prominent. The track has a brilliant, fierce solo with Joe attacking the guitar which compliments the subtlety of the melody nicely. Wah wah pedals bring out the next track Dream Song – the riff along with the gentle keyboard rythmic line gives a great backdrop for Joe to setup his semi-blues guitar leads that sound almost like words. So far we haven’t got the band cranking out at full throttle yet and it’s still very memorable & nice. Pyrrhic Victoria sounds like a groove oriented number and sounds like it could have felt right at home in his 1998 album Crystal Planet. The solo is a real shred fest.

We then come to the first single, Light Years Away. It’s an awesome track, with some rumbling bass that sounds like it’s about to explode, danceable beating drums giving it company and ofcourse Joe’ storming away on his Ibanez. Appropriately for a track named Solitude, it’s just Joe on his guitar with some delay & reverb. Littleworth Lane is a down on your luck lament (without the lyrics) but can’t you just see a guy in a seedy bar when this song plays? I can imagine the perfect video; a bar band playing this with just a bartender, a solitary drinking customer moping in his beer and a lady cleaning up the bar which is near closing time. Did Joe visit India recently? It certainly sounds like it when you listen to the next song. Tablas join the band in creating The Golden Room, this Eastern flavoured track and Joe’s solos are magnificent here. It simmer and boils but never explodes and some might like it for that but I think all that is missing is an explosive break out with noisy guitar solos.

Once again the Blues element shines on in Two Sides To Every Story, in which the playful nature of the music can take over the listener who will surely bop his/her head to the rhythm. Kennely’s Hammond organ is soulful and graceful and the drums funky. Next up is Wormhole Wizards (wait! Where are the Black Swans). The keyboards set up an etheral melody and then the bass drives into place with the drums, giving us a head bopping number. Joe’s guitars then takes over. I really like the solo lead section of this song. Wait it’s not over; we also get a keyboard solo from Mike! Awesome track! Wind In The Trees is a wah drenched gentler track with open harmonics and distorted ballad style solos. Very laidback & relaxed. We come to an end of the album with God Is Crying. Funnily enough the song starts out with a clapping track before the driving riffs snake their way in and builds slowly from a cleanish guitar part that slowly cranks up the volume before kicking into the the main theme after about 45 seconds.

It’s not his best album out there. Infact I’d name atleast 5 or 6 that are better but anything that Satriani puts out will be a class apart from all  the drivel that is being pumped out these days. Easily a good buy. Enjoy the video!

Another one bites the dust. Out of my 2 best friends, one is married and till this Sunday there will be two single men. Because on Sunday, my buddy Anil Alapatt is getting engaged. The surprise information hit me this evening when Anil called me up on his way back home to Thrissur to let me know that he is about to take the big step before the biggest step in his life.Madhu is getting company in the married men list of our small gang, leaving me as the only eligible single dude.

As the story goes, he’s 36 years old and his parents are alarmed by the amount of hair that he is losing and the scalp that they can see on the top of his head. Carefree bachelor lifestyle happiness be damned and they went out to search for a woman for him. A good proposal came their way and his parents took to meet the girl and her family. She is a lecturer at a college in Thrikkakara and she is 30 years old. It seems that his parents like her and he does too. So her family also comes to visit his house in Thrissur and both parties are satisfied that the families are a match. He likes her and surprise, surprise she has agreed to marry him!

So there goes another long time bachelor, bowing down in front of the marital monster. The wedding date is to be decided on Sunday but in all likelihood it will be in January. So I guess I am the only single guy in our little trio. I’m happy as hell for him but this just makes me feel a little down. I guess I will find my life partner one of these days too. I just have to be patient and she will come along.

Join me in congratulating Anil and best wishes for the engagement on Sunday.

Ok, I’m not that sick as depicted in this little cartoon, i.e I do not have a temperature and I am not restricted to lying in my bed at all times. However I am unwell.

I got wet in the rain last Thursday night while walking from the office till the bus stop. It wasn’t raining heavily but I guess that was more than enough to make me sick. The next day I battled a sore throat and tried fending it off with lots of hot water & coffee. Saturday and Sunday it was more of the same followed by a hacking cough and a cold. Runny nose was the highlight of my Sunday.

I felt better on Monday, enough to get to work but the air conditioned environment wasn’t really helping my sinuses. I coughed and sniffed my way throughout the day. I still struggled and survived the day and on my way home got some hot coffee. Yesterday I was feeling even more worse and people kept offering to get me black tea, coffee & hot water. I decided that I needed some rest from work and stay at home or I would end up getting even more sick. So I applied for a 2 day leave from the office, which was granted no doubt by hearing & seeing me cough about 90 times in a 5 minute discussion. I was so happy to get this leave as I really didn’t know how I would manage to stay in the office and get by.

Oh and last night I had some wonderfully rich hot chocolate at Cafe Coffee Day. It’s called Molten Chocolate or Molten Lava or something and is absolutely delicious and did a wonderful job on my sinuses & throat.