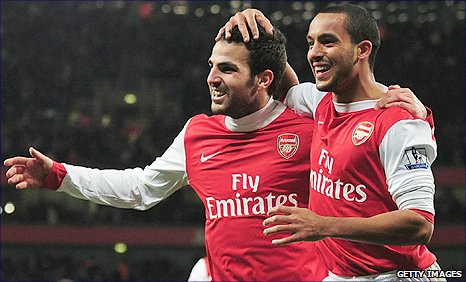 Ok this is such good news. I could not watch this game last night but managed to catch the highlights this morning. Arsenal boosted their Premier League title hopes in emphatic fashion and damaged Chelsea’s in the process with a stylish victory at the Emirates. It moved the Gunners up to second in the table, two points behind Manchester United but having played a game more, while Chelsea – also a match ahead of United – are in fourth and six points off the pace.

Arsene Wenger admitted halting a barren run of 11 games in all competitions without a victory over closest rivals Chelsea and Manchester United – including 10 defeats – would provide a psychological lift as they bid to secure their first silverware since 2005. And they will take huge confidence from the manner and margin of their first win against Chelsea since a 2-1 triumph at Stamford Bridge in November 2008. Alex Song put them on the path to victory with a goal seconds before the interval, but the real damage was inflicted on Chelsea with a double salvo from Cesc Fabregas and Theo Walcott in the space of two minutes just after the restart.

Branislav Ivanovic’s header set up the prospect of an anxious last 30 minutes for Arsenal, but it never materialised as they held out comfortably in the face of a timid Chelsea challenge.

It seems that there are 3 unidentified flying objects (UFO) in space headed for Earth. From The Examiner:

SETI Astrophysicist Craig Kasnov ( not to be confused with Craig Kasnoff ) has announced the approach to the Earth of 3 very large, very fast moving objects.  The length of the “flying saucers” is in the range of tens of kilometers.  Landing, according to calculations of scientists, should be in mid-December 2012. Date coincides with the end of the Mayan calendar.

A few very large objects rapidly approaching the Earth – says SETI astrophysicist Craig Kasnov.  Don’t take his word for it you can check it out for yourself.  He recommends to go to the site http://www.sky-map.org/ and enter the coordinates of the giant UFO:

The project participants are assured that the facilities are absolutely real, and the American space agency NASA is trying to conceal important information.

None of these objects can be seen from the northern hemisphere. The second set of numbers in each line tells us that the “object” or “objects” is/are coming in from very deep in the southern hemisphere sky.

In any case, the only thing we can do now – wait for it – says Kasnov. – Soon celestial objects will be visible in a good telescope.