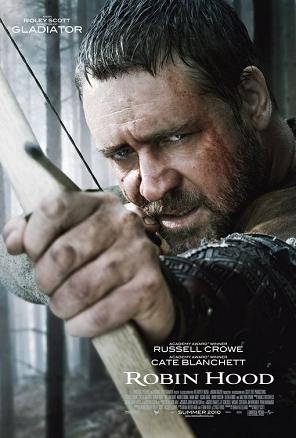 I was never a fan of Russell Crowe but I gotta say that I truly did like this movie. Directed by Ridley Scott and based on the English legend we all know and love. Starring Crowe as Robin Longstride who becomes Robin of Loxley aka Robin Hood, Cate Blanchette as Marion, William Hurt as William Marshall, Max Von Sydow as Sir Walter Loxley, Kevin Durand as Little John, Mark Addy as Friar Tuck & Great Big Sea frontman Alan Doyle as Allan A’dayle.

The battle scenes between the French and the Englishmen are wonderfully shot and planned out. The castles shown in the movie seem like the authentic thing and the fighting as realistic as possible with all those primitive weapons. Ofcourse it being Robin Hood I wanted to see some bows and arrows and man was I pleased. You get some of the best archery scenes ever to come out in a movie.

This movie brings out things about Robin Hood that I did not know of – if it is actual legend and not just based on the actual legend for the benefit of this movie. Like I didn’t know that Maid Marion was another man’s wife and that Robin has to pretend to be Robert of Loxley, who died in an ambush. People don’t know that it is an impersonator, as Robert has been away fighting the French for 10 years. Robin is asked by a dying Robert to return his father’s sword to his blind father, Sir Walter.

Plus, I though that the Sheriff of Nottingham was to be the main antagonist of the Robin Hood saga but in this movie he is nothing more than a pest, initially, to Marion and then more of a joke. Marion & Robin begin an unlikely romance and she also joins him in battle, without his consent ofcourse. The final battle scenes are a thrill to watch and in the end, even though the French are defeated and forced to retreat, King John of England see Robin as a threat to his power and declare him and his men to be outlaws. In response to this, Robin moves to Sherwood Forest with Lady Marian and his friends to form what will become the Merry Men of Sherwood Forest.

Performed during their reunion tour, here’s Big Sugar doing a wonderful All Hell For A Basement.