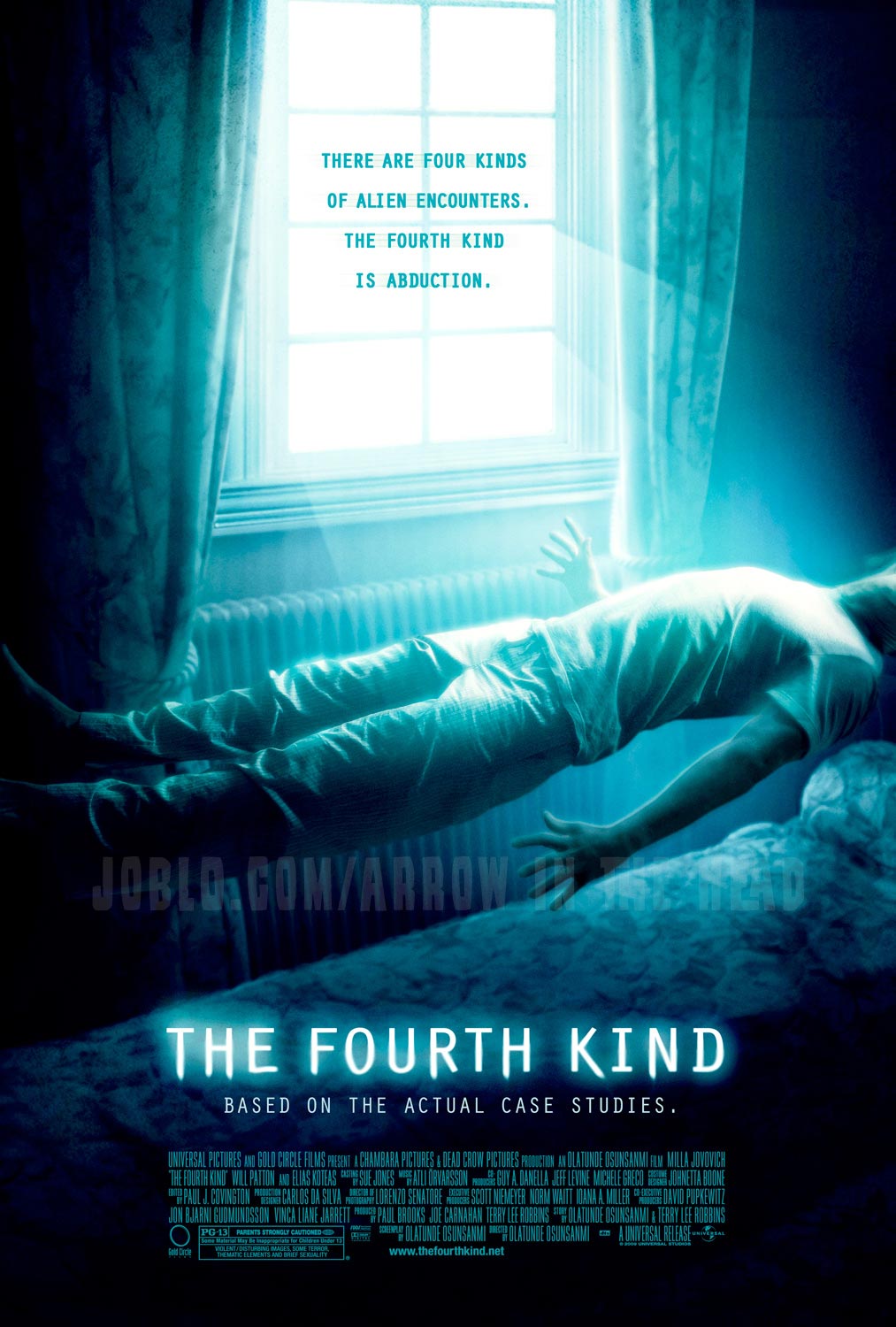 The Fourth Kind is a movie that deals with the alien abduction theory. Starring Milla Jovovich, Charlotte Milchard, Elias Koteas & Will Patton the film, although completely fictional, makes the viewers think that this is based on real life events occurring in Nome, Alaska. The film has two components—dramatization, in which professional actors portray the individuals involved, and video footage purporting to show the actual victims undergoing hypnosis. Towards the latter half of the movie, the two clash and you get a quickened sense of something major happening.

Nome is supposed to be an epi-center of alien abduction as depicted in the film, having more missing people for a town it’s size. Dr. Abigail Tyler has 3 patients who all suffer from insomnia. The 3 also say that each night they see a strange while owl looking at them through the windows. Tyler puts a two patients under hypnosis, and while under, both patients recount similar terrifying stories of creatures attempting to enter their homes. Furthermore, both patients also have bizarre occurrences following the hypnosis sessions.

The patients also speak in a mysterious language during hypnosis, which is later found to be Sumerian. One of her patients goes home and kills his family and then himself as he is unable to adjust to the vivid images of the creatures and what was done to him during the abductions. The sheriff blames Dr. Tyler for goading people who are already traumatized into believing that Aliens abducted them and that she drove her patient over the edge. Abby calls a friend and colleague Dr. Abel Campos to help her out with these cases.

We see her other patient levitate while under hypnosis, creating a scary situation. He also speaks in Sumerian. Later Dr. Tyler reaizes that her late husband, Will Jammeson, who was mysteriously murdered one night in his sleep, leaving her to raise their two children, was killed by aliens and that she herself is an abductee. Later, Tyler’s daughter, Ashley, is abducted. Tyler undergoes hypnosis in an attempt to make contact with these beings and reunite with her daughter. Campos and Odusami, a language expert, videotape the session, and once hypnotized, is it revealed that Tyler witnessed the abduction of her daughter. The camera scrambles, sounds of violence are heard in the background, and a harsh voice yells “Zimabu Eter!” before the camera returns to normal. The remaining footage is of an empty room, the camera’s tripod knocked on its side.

The film cuts to an interview with Tyler in which she explains that all three were abducted during that hypnosis session and none have memory of what happened. The film returns to the aftermath of Abbey’s hypnosis session. She wakes up in a hospital after breaking her neck in the abduction.

The film tricks you into believing that this is based on actual facts. The movie boasts some nice imagery and good eerie scenes – the video shot of the owl’s head turning around almost unnaturally, following the camera. (Owls can rotate their heads and necks as much as 270 degrees in either direction). The acting is good and believable. 6/10 – not bad for a movie made on a budget of $10 mil only.

It was about 4:30 pm in the afternoon. Lazy sleepy Sunday afternoon I might add. The kind I love. Where there’s not much going on except for people taking long naps or watching Sunday movies on HBO, Star Movies or on any one of the Malayalam, Hindi or Tamil channels. Or you know watching a dvd or two. The kind of Sunday where you get ice cream after a big lunch and the very thought of getting up from your couch/bed is enough to induce pure hatred. It was that kind of a Sunday – mom is watching a movie on the big tv, dad is deep in a nap and I’m lying on my bed watching an episode of Star Trek : Deep Space 9.

The episode was barely 5 minutes in when I lazily reached down to my left side to the bottom of the bed to get the bottle of water that I keep near me. I got up slightly and lifted the bottle to my lips to take a big swig of water when – KABOOOM! A huge earth shattering noise filled the air and I could get the smell of smoke. The power went out at the same time and my laptop was on it’s batteries. The external speakers I plug into the laptop went off as well. A nearby transformer had blown up and that was the sound and the reason for the smoke and the power going out.

With the unexpected shock of that loud explosion, I had a quick jolt and therefore spilled water all over my groin area and the sheet covering the groin area and also my belly. Kinda looked like I either had a bit of a bed wetting accident or that I was really excited to be watching Star Trek. Also it is during moments like this that you realize how salty your balls are – because in that nervous jump up from my bed that I did, I’m pretty sure that my balls jumped all the way up to my throat!

Anyways, I got up and changed the sheets while also using it to wipe myself dry and then settled back on the bed to wait for the power to come back on, which it did in about 30 minutes. And then I went back to watching my show!

While they are the second-lowest scoring team in the league, the Senators have now surrendered 157 goals — second most after Edmonton’s 159, before Saturday’s action.

Since my last update of the Senators they’ve had just 3 wins in 15 games! Yes it has been that bad. Out of 5 games between 18th of December till the 31st, Ottawa scored 2 wins and 3 loses, out of which 1 was in OT. So that’s 5 out of a possible 10 points.

Of the 10 games we’ve played so far in January, the only bright spot is a 6-4 win against the New York Islanders. We’ve lost all the other 9 games, 2 in OT i.e a miserly 4 points out of 20. The low points have been humiliating home loses to Toronto 1-5 and 1-7 to Montreal. At home! Also a 0-6 loss in Boston to the Bruins. This makes reaching the Stanley Cup playoffs a distant dream.

It’s time to rebuild and that is only possible by offloading current players. Who do they move?

The Senators are casting about to see what they can get for Mike Fisher. But with the 30-year-old armed with a no-movement clause and two years left on his contract carrying a cap hit of $4.2 million, two league executives seriously doubt he’ll be going anywhere anytime soon. He’s been with the Senators his whole professional career, having signed on in 1998. Similarly the three Chris-es have been with Ottawa for more than a decade – Philips since 96, Neil from 98 & Kelly since 99. They form a huge core of the team – do the Sens trade these guys?

Ottawa needs a better top class goalie and better defencemen. The goalie problem has been stated for a long time and we just can’t depend on Pascal Leclaire who has been injured most of his time in Ottawa. If he is 100% fit he is more than capable of being a top class goalie. Brian Elliot is at best a good deputy but he has been leaking goals of late. Robin Lehner is too young and too untested but seems to be a goalie for the future.

I would try to sell the following – Gonchar, Smith, Shannon, Foligno, Regin, Ruutu, Winchester, Kovalev, Elliot & Kuba and try to get some strong players if possible.