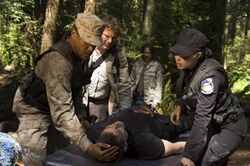 ThInfected by an alien organism Lt. Matthew Scot stars hallucinating and it feels extremely real to the young soldier. In it he is heading home with Ronald Greer in a bus, after the two have had a tour of Afghanistan. On seeing Eli & Col. Young after getting down at their stop, he runs to them but is hit by a car. Col. Young is his father in this dream & Eli is the brother of Chloe, who is getting married to Scot. Despite getting hit, Scot is ok and they head home. Scott introduces Greer to Young and Eli. Greer is to be Scott’s best man at his upcoming wedding to Chloe. Eli notes that he took himself out of the running for best man, as he plans to film the wedding as a present for the couple.

Scot is a bit disappointed that there isn’t going to be a bachelor party as Young explains that Chloe wants to take Scot to a movie. The Lt. faints as Chloe after just having come to the house inquires about his bruise from the car hit. Once he recovers, Greer attributes it to the fact that Scot hasn’t eaten all day, to which end Chloe makes a sandwich. Young states that Scot looks fine & that his son & future daughter-in-law should go for the movie. However Scot is confused at the theatre – the movie shows him & Chloe as the two main actors. Disturbed by the scenes of the film (a horror movie with him & Chloe as the lead pair) Scot leaves the theatre, followed by his fiance. They go to a bar, run by Brody, where unknown to Scot, his bachelor party is being arranged. Happy at the surprise, Scot enjoys drinks with his father & friends.

After getting drunk, Eli & Greer try to lead Scot home. Telford, a sheriff offers them a ride home. Chloe is upset the next morning that he is hungover but tells him to get to the justice of peace – Dr. Rush. Later Eli says that he isn’t sure that the Lt, can commit himself to just one girl. A little angry scot walks out but faints again. A medic, Johanssen, treats him and he wakes up to go to the wedding. This is when he finally wakes up in the real world. A huge plant organism with huge tendrils were attacking the away team on a planet. Lt. Scot was infected by the venom in the tendrils and has been hallucinating the whole thing, while the crew try to fight the organism and also save Scot from the infection that is spreading quickly. They had come down to amputating his arm to save him and stop the infection from spreading throughout his body but Chloe’s blood is what saves him. The transfusion from her kills the infection and he is saved. However Col. Young, while happy that the Lt is ok, has him & Chloe kept in quarantine.