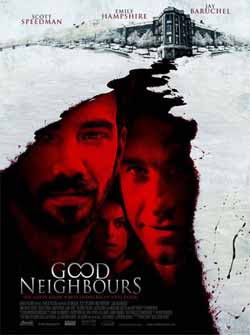 Notice the spelling of “Neighbours” and not “Neighbor” – it’s not an American movie but rather a movie from their good neighbours (pun fully intended) to the north. Jacob Tierney has directed two really good, intelligent movies, quite out of the way of the usual Hollywood stuff that you get to see. Both these movies star his good friend and rising star Jay Baruchel.

The movie also stars Scott Speedman, Emily Hampshire & Anne-Marie Cadieux and has a cameo by Jacob and his brother Kevin. Victor (Baruchel) has come back to Canada, after spending a while in China, to teach in a school and live in Montreal’s Notre-Dame-de-Grace neighbourhood. This is in 1995 during the Quebec Referendum where Canada was almost torn apart as Quebec was voting to see if they should or shouldn’t separate from English Canada. As Victor moves in to his apartment building he meets two people who he will spend a lot of time with – Louise (Hampshire) a waitress in a Chinese restaurant and Spencer (Speedman), a cynical young widower who lost the use of his legs in the car accident that claimed the life of his wife. Louise and Spencer have bonded over their fascination with the killer stalking their streets, news shared over old newspapers and nightly glasses of Scotch, and Victor wants in.

At the same time there is a terror on the loose; a serial killer who rapes his young female victims before murdering them has the city in a panic and after her co-worker is killed, Louise asks her new neighbour Victor to escort her back to their building every night after her shift ends at 7pm, which the love struck young man is only eager to do. Louise meanwhile reserves her affections for her two cats. Then there is the Francophone nieghbour who keeps yelling on the phone with her husband and scream at Lousie to keep her cats away from her garbage. Finally angry and fed up, this lady poisons the two cats who are later found dead by Lousie.

Both Spencer and Victor approach Louise to do the other off and it’s clear that she isn’t really that bothered. She does however set up Spencer who thinks he is going to kill an asleep Victor, but the latter however is awake and waiting for him. In the movie’s showdown, a much stronger Spencer seems to have the upper edge but while the two tussle on the fire escape, a flailing Victor pushes Spencer down to the road and to his death. The police who had been investigating the apartment console Victor as the movie ends, happy that the killer is dead.

While containing a brutally harsh yet hilarious murder scene, one you might never have expected to see, the dialogues and tension amongst the 3 main characters provide the best scenes in this fascinating movie. It’s slow to pick up but you’ll enjoy it all the same. 8 outta 10.

This week & the next are all about the Champions, Wimbledon or simply Wimbledon. It’s the most prestigious tennis tournament in the calendar, held at the All England Lawn Tennis & Croquet Club located in the London suburb of Wimbledon ever since 1877. For professional tennis players this is the Stanley Cup, FIFA World Cup or Superbowl put together. Winning a single title here ensures your name in the history books in more ways than one and also get you a lifetime membership at the club.

The singles trophies, pictures here on the left, are beautiful & amongst the top 5 most prestigious trophies to win, certainly the most prestigious for an individual sport. The men’s trophy is easily the most handsomest trophy of all. It’s just so well made. Each year the winners get a smaller scale replica of the trophies for theirs to keep.

The first time I came to know about Wimbledon was during the 1987 championships. I remember watching Pat Cash winning the final and climbing the stands to hug his wife & family, leave a lasting impression on my 11 year old mind. My favourite players were Stefan Edberg, Mats Wilander, Steffi Graf & Martina Navratilova. Ever since then watching the 2 week tournament was a yearly tradition for me till 1998. That year, I rediscovered football with a flaming passion and lost most of my interest in tennis as a sport. The last Wimbledon that I actually watched more than just bits of the final was in 2001, when veteran Goran Ivanisevic won his first and only Grand Slam title. I’ve watched bits of Roger Fedderer’s wins and maybe a set of Rafal Nadal win last year but that has been it.

I’ll probably never get into tennis as much as I used to but Wimbledon continues to always be magical for me. Maybe I’ll watch the finals this year.