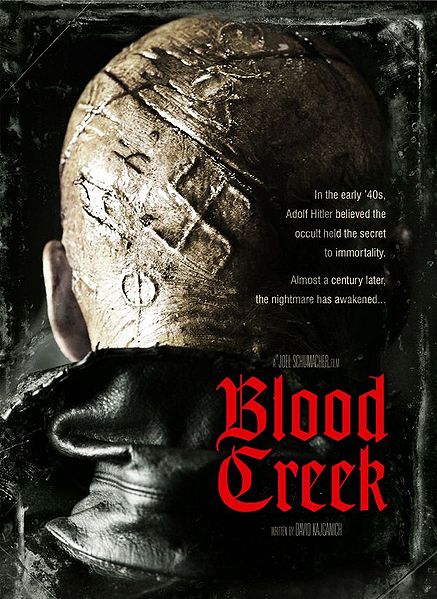 Blood Creek is a 2009 horror / occult action film from director Joel Schumacher starring Michael Fassbender, Dominic Purcell & Henry Cavill. This is another one of the films, like Devil’s Rock, that references the experiments in the occult that the Nazis pursued to help them in their quest for world dominance. I find this phenomenon very fascinating and though it has been a popular topic since 1959, I’ve only known about this for 5 or 6 years.

Anyways as the movie starts the Wollners, a German family living in rural West Virginia, are contacted by a Nazi German emissary and asked to host a Professor Richard Wirth. Needing the money and under the impression that Prof Wirth is a scholar in pursuit of educational ventures, the family accepts. However the professor is less interested in science and more involved with the occult. Years ago, the family found a Viking runestone on their property and built a stable on top of it and Wirth wants to use the powers & energies from it to do evil and aid the Fuhrer’s war efforts. At night he goes into the stable  and starts to channel the powers by reading off the inscriptions. The family interrupts him before he can complete the rituals and horrified by what he is doing, they trap him in the cellar and use blood markings to keep him from escaping.

This unfortunately also means that they need to capture and sacrifice people and use them as a source for blood. Due to the rune rituals the family doesn’t age and even in 2007 they are all the same age as they were back in 1936, stuck in a life without escape or an end. However one of their victims, Victor Marshall (Purcell), who was captured while he was fishing, escapes his binds and makes his way back to his town. After many weeks his younger brother Evan (Cavill) is shocked to find his brother back at their old cabin, smelling like shit and with a long beard & hair. Victor tells Evan to ask no questions and to load up their rifles, pack up their boat and return to fight the evil. As Evan does this, Victor takes a shower and shaved off his beard & hair.

The brothers go to the farm and confront the Wollners who finally tell Victor & Evan about Wirth and the dangerous powers he possess. Initially the brothers don’t believe them until a deformed Wirth gets out and starts his terror. As for powers, he’s got:

However to control him his flaws are:

After a lot of fighting, killing & stuff the brother manage to poison Wirth with his own blood and decapitate him. As a result the Wollners are released from their curse & suffering and rapidly age and die. However before the girl dies she tells Evan that that 8 more such Nazi agents were sent to different farms in the state. Evan finds a map that was under the farm and discovers that others like Wirth are at other farms. While Victor returns home to his family, Evan heads out to the other farms to stop the Nazis.

Interesting and a change from usual occult led monster horror movies but in no ways a classic. I’d just give it a 7 outta 10!

The man who has done the most to promote rock music in India has passed away. Amit Saigal, founder and editor of music magazine the Rock Street Journal, drowned while swimming off a Goa beach on Thursday. Saigal was swimming with his friends near their anchored sail boat off Bogmalo beach, 35 km from Panaji in Goa. Saigal’s friends who were present there said that he was asthmatic and could have had an asthma attack when he was swimming, while the entourage had anchored the sail boat mid-sea. Lifeguards responded to wild gesticulation on the boat seen through binoculars and sent a couple of guards on a ski jet. Saigal was lifted to the boat by his friends and was lain on the side of the boat with no pulse.

Saigal was later taken to hospital where he was declared dead. The police have registered the case as an unnatural death and the autopsy is likely to be conducted soon.

Amit Saigal, founder and editor of the music magazine Rock Street Journal was responsible for popularising independent music scene in India to a great extent. He started Rock Street Journal in January 1993 in Allahabad with Shena Gamat Saigal after they realised the lack of support system for Indian rock musicians. Saigal had over 25 years of experience in the music business in India, and was closely involved in the club as well as the concert market in India, and had been an encouraging entity to many emerging rock bands and musicians. Some of the biggest contributions to the music scene include the festivals started by him which include Great Indian Rock Festival popularly known as GIR, Global Groove Festival & Convention, Pubrockfest, Jazz Utsav and Rocktoberfest and the latest inclusion being the India Music Week.

I had every issue of RSJ from that first almost rustic looking copy in 1993 till around 2006. I still have a few issues lying in my cupboards. RSJ was the single most lifeline for a lot of Indian rockers because it fueled our passion for the bands & music we loved at an affordable price. I could never afford Rolling Stone or Guitar Player at the age of 17 but RSJ was easy to buy and I subscribed to it for years. Thank you Amit for being a beacon of shining light in a once desolate desert of musical journalism. The rockers & musicians of India owe you a lot.

About 2 hours ago I found out about the death of a former colleague and friend Koshy Thomas. He passed away yesterday after a battle with cancer. He was just 42 and leaves behind his wife Ann and two young sons.

I met Koshy while I was working in Idea Cellular’s main office for Kerala in Mercy Estate, Ravipuram. I worked there from Jan 2004 to Jan 2006. It was probably around September of 2004 when I first met Koshy while being called to get some details on the issues of a major customer. Koshy came back up upstairs to where my station was and said thanks. Afterwards I got promoted and I got to spend more time with him. We found out that we had a couple of mutual friends. He like me was also a former resident of Kuwait and we went to the same school but during different years as he was 7 years older to me. We shared similar tastes in music He treated me like I was his younger brother and used to tease me about my weight. I remember spending a couple of hours with him during New Year’s eve 2005 drinking a few vodkas before we had to leave, laughing at his jokes. I’ll forever cherish that memory.

Other than being a respected, well loved & admire long time Manager in Idea, Koshy was also a musician. From his college days he was the lead vocalist for a popular local rock band called Wrenz and later stints with Atma. When his father passed away, Koshy took up a job as a customer care rep for Escotel (which later was taken over by Idea cellular) and grew within the organization. He also met his wife Ann, who is also my former colleague & friend, at the office and there a friendship & love blossomed. Although I lost touch with them around 2007 after I had moved out, they were still in my mind as being wonderful friends. A few months back I friended him on Facebook and came to know about his battle with cancer.

Recently his friends got together to record a video of their popular single My House which was originally released a few years ago. Koshy is there singing with his beautiful voice. He’s the first one who sings, with sunglasses & bandana. Rest In Peace brother! We will all miss you. Thank you for treating me like a brother, thanks for the laughs & the friendship.