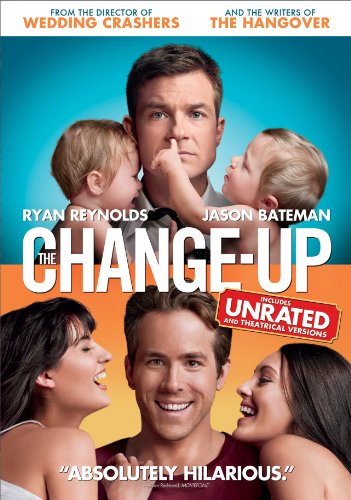 We have here a funny film, hilarious and pee inducing. The Change Up was produced and directed by David Dobkin, written by Jon Lucas and Scott Moore, and stars Ryan Reynolds and Jason Bateman as two guys, best friends but who live totally opposite lives and who get a body swap by a mysterious magic fountain. The movie also has solid supporting cast of Leslie Mann, Olivia Wilde & Alan Arkin.

I don’t understand why this film didn’t do well while other similarly crude styled comedies did better. I found this to be funnier than most of the recent comedies like Hangover 1 & 2, Horrible Bosses & Bridesmaids. Anyway I hope the movie, which didn’t do well in the box office does better on dvd & Blu Ray.

It’s funny, gross & gut busting humour but funny still. The lead actors are skilled enough to pull it off. Forget the box office, get this movie and laugh from beginning till end. 8 out of 10 for me!

We are down to the final two episodes of SGU. The Tenerans have been off the ship but some of Destiny’s crew wishes that they had stayed. Volker & Brody watches from the bridge as the ship enters a gas giant to replenish it’s reserves even if they seem to have quite a bit left. However as soon as they come out of the gas giant’s atmosphere they find bezerker drones & a control ship in front of them. It will take them exactly the same amount of time to get the FTL drive active as it does for the drones to reach them. The drones reach them and begin the attack, but Destiny is able to jump mere seconds later. Rush comes to the conclusion that the drones are predicting Destiny’s course and not actually tracking them and that the crew need to find alternative stars for recharging their batteries in order to avoid the drones.

David Telford is contacted using the long-range communication device and informed of the situation. He expresses disbelief that the drones could have blockaded every available star, but Eli points out that the drones only need to be at the next one, as they don’t have the power for any more attempts. They come up with a plan to divert Destiny to a blue super giant, something that the ship would never do on it’s own. Volker objects to the plan, as the extreme temperatures would kill the entire crew. Rush explains that the crew will be evacuated, while a small team in Ancient environmental suits pilots the ship. Telford wonders why they can’t just set the ship to autopilot, so Eli explains that someone must stay to prevent the ship from aborting the attempt. Rush & Eli are the ones who stay behind along with Lisa Park who Young permission to collect the last of the medicinal plants, citing her experience with the environment suits.

The rest of the crew goes through the gate to a nearby planet, very similar to a modern town on Earth. The planet, probably a branch off from the Novus colonists, looks safe and hence two groups head off to find supplies, while the majority stay in the building that houses the gate. The groups find paved roads but oddly no vehicles and stop at certain stores. Meanwhile, Morrison has found a newspaper clipping indicating that the civilization on the planet was attacked and as he creates too much of a fuss, James is force to knock him out cold. The two groups are attacked by drones and at first hide in the stores. As they make their way back to the gate, Varro is able to  take out a couple of drones with a rocket launcher.

On the ship Park gets trapped in the hydroponics bay and they are unable to open the doors to let her out. Rush feels that her best bet is to jump into a pool of water in the bay and the environment suit should also be able to protect her. Park takes refuge in the collection pool as the garden burns around her as the ship moves through the blue giant. She is saved but loses her eyesight in the way too bright light as the dome shatters. As Eli has the doors opened to retrieve her, she cries saying that she gone blind. As the rest of the crew returns to Destiny, Young, Greer, Scott, and Varro watch as an entire Control Ship descends upon the warehouse building on the planet, though not quickly enough to stop them. Destiny now has a full tank of energy but TJ has to go and check on a despondent Park.