You want to buy me a present for my next birthday (which is in August) I hear! Cool, start saving your money and put it towards buying me: A beer bottle chandelier. Like this or others like it. You have very cool designs available for purchase! Very awesome looking fish aquarium coffee tables! Combine  two things at one and it will not only serve both purposes but look amazing as well. Upside down beer bottle shapes in the inside of a beer glass! Incredible!

And finally the remote controlled tarantula. To frighten women and small children! :D 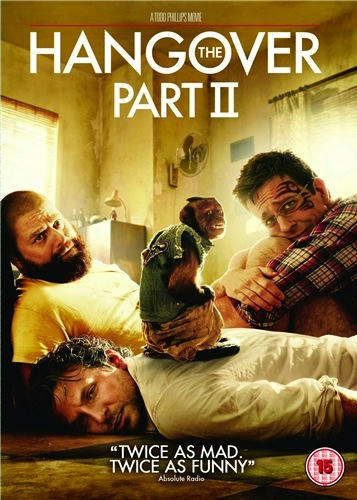 As the first movie was successful & loved, no reason not to make a sequel. I actually liked the sequel or The Hangover Part II as it is titled a little bit more than the first one.  Todd Phillips directed the film in addition to co-authoring the script with Craig Mazin, and Scott Armstrong and once again the film stars Bradley Cooper,Ed Helms, Zach Galifianakis and Justin Bartha (who again misses on the fun). This time tells the story of Phil, Stu, Alan, and Doug as they travel to Thailand for Stu’s wedding, 2 years after the events of the first movie.

Stu met & fell in love with Lauren (Jamie Chung) who’s family is from Thailand and hence the wedding is to take place in Bangkok. Phil & Doug convince Stu to invite Alan to the wedding and they go to see him at his house. Stu wants to be safe and only agrees to a subdued pre-wedding brunch rather than a big night party. Lauren’s younger brother Teddy is also with them. After they land in Thailand it is obvious that Lauren’s father doesn’t approve of Stu and even manages an insult to him during the family dinner. At the end of the night, Stu hesitantly joins Phil, Doug, Alan and Teddy for a beer. Sitting at a campfire and roasting marshmallows, the group toast to Stu and Lauren’s future happiness.

And that’s when the craziness begins:

And ofcourse we see the events of the night in photos, much like the first movie. It’s fun, it’s a laugh riot and it’s good. 8 out of 10!