Closer To The Heart off Rush’s Live in Cleveland dvd, which was shot during their Time Machine Tour. 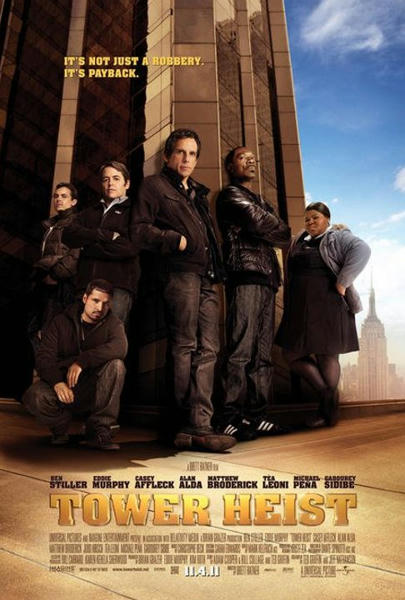 2011 has some good movies perhaps a few more than the previous years. One such movie, as I was told by a few people, is Tower Heist. It’s a crime-comedy movie directed by Brett Ratner and starring Ben Stiller, Eddie Murphy, Casey Affleck, Matthew Broderick, Alan Alda, Tea Leoni & Michael Pena. The movie is about a few ordinary people planning a heist in an apartment of a huge skyscraper to get revenge and correct a wrong. Eddie Murphy was involved in the making of the movie from 2005 onwards, which was supposed to be an all-black cast robbing a Trump building.

Ok so Josh Kovacs (Stiller) is the manager of a huge exclusive high rise building, one of the biggest in NYC, and is good at his job. He plays online chess with wealthy business man Arthur Shaw (Alda) who he seems to have befriended. Among the staff of the tower are concierge Charlie (Affleck), his brother in law; Enrique(Pena), a newly hired elevator operator; Lester, the doorman nearing retirement; Odessa, a maid; and Miss Iovenko, who furtively studies for her bar exam at work. Shaw is arrested for fraudulent investments by the FBI and Josh gets involved as he first believes that Shaw is being kidnapped, when he in fact was trying to escape. Josh is stopped by the arresting FBI agent Claire Denham (Leoni).

Josh tells the Tower staff about Shaw’s arrest and explains that he gave Shaw their pension fund to invest, and their money is gone. Lester attempts suicide but is saved in time. Josh, Charlie and Enrique visit Shaw, who is under house arrest and ask about the money and seems insincere and a frustrated Josh breaks the windows of a 1963 Ferrari 250 GT Lusso that Shaw keeps inside his apartment. The building’s General Manager apologizes to Mr. Shaw and fires the 3 employees. Denham takes a liking to Josh and meets him for drinks; while drunk she lets on the  fact that Shaw was careful and must have a safe stashed away somewhere. Josh gathers Charlie, Enrique and an unemployed former Tower tenant Fitzhugh (Broderick) and plans to steal the money, reportedly $20 million atleast, from Shaw’s apartment and give it to all the employees. They hire a local thief Slide (Murphy) to join in an share in the money and teach them how to do it.

They also need someone to crack the safe and bring in Odessa, who works in house keeping at the Tower and whose father taught her how to open safes. Just before Thanksgiving Day, Charlie tells Josh that he is backing out as he has been re-hired and as the building manager. The rest of the team use the Thanksgiving parade as a distraction and sneak in to the tower. They get to the apartment and find the safe inside a beam but find the safe empty.  In a scuffle they find out that Shaw invested his cash in gold, had the gold melted down and cast into car parts, and then assembled the car in his apartment! Josh also finds a  ledger of Shaw’s illegal finances in the car’s glove box. They lower the car through the window in an empty apartment but are unable to take it out as Denham & the FBI are onto them and are giving chase. Using Lester to drive away in a huge truck as a distraction, the team takes the car to Shaw’s rooftop pool and covers it.

Denham arrests Shaw on seeing a hidden safe and also arrests Josh and his team. Miss Lovenko arrives, having passed the bar, and acts as Josh’s attorney, shows the FBI Shaw’s hidden ledger which seals the case against him and asks for Josh & the team’s freedom in exchange. The FBI accepts on the condition that Josh, being the primary conspirator, must serve a minimal two-year sentence, which he readily agrees to. The rest of the team get the car from the pool, strip the parts and send each of the employees a part to compensate for their lost pensions. As the movie ends Shaw begins his life sentence and Josh is booked into jail, a satisfied smile slowly forming on his face.

Fun movie although it didn’t really explode when it had plenty of chances to do so and I guess you could say that it could have used better writing. Stiller is subdued in his role while Murphy is hilarious. Tea Leoni has a good scene in the bar getting drunk. Overall I would say that it was good enough. 7 out of 10!

After my parents, my sister & I moved from Kuwait back to India and settled down in our house in Thrikkakara, we went from being just the 4 to a huge extended family. Mostly on my mother’s side – a plethora of uncles, aunts and cousins plus my grandmother. Every vacation time we would get together, usually at my grandmother’s huge house in Mattancherry. Every year school kids get a 2 week vacation during Onam (in September) and Christmas and then ofcourse a 2 month summer vacation once your school year ends. During the first couple of years, 1987-88, we’ve gone on a family trips to different places.

We’d hire a couple of mini-buses, called tempo travelers seating 14 people, and if needed a car or two (to fit all the folks in) and go on these long road trips and see all the places. Riding in the mini-buses which come equipped with a tv and vcr so you can watch a couple of movies during the long hours on the road. Or play songs on the stereo system and sing along – I pity any of my uncles & aunts who would have the misfortune of sitting in the vehicle with a bunch of us at our loudest. We’d stop at places on the way for drinks, tea and food and then get back in to enjoy the trip once again. I remember us going to Palghat, Coimbatore, Mysore, Madurai and I think Mangalore & Bangalore. I can’t remember much as it has been all these years but I do have some photos in a couple of albums, which I will have to hunt and find.

Staying in hotels, 4 to 5 kids in a room, fighting over the pillows, playing board games or quiz contests till late in the night. Those were awesome times. At that age we didn’t care of the sights & sounds in the cities we went to but I do remember a memorable visit to an art museum.