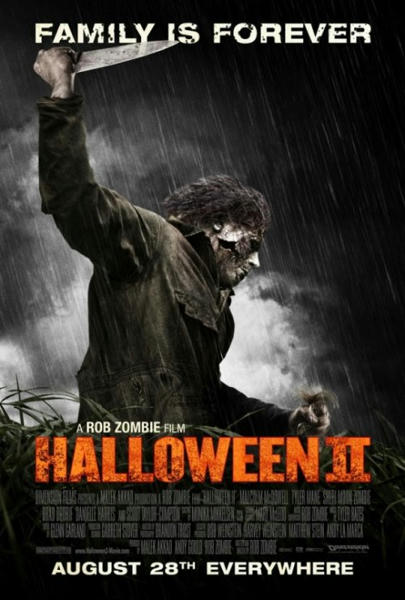 Two years after he rebooted the Halloween franchise with his 2007 movie, Rob Zombie brought out the sequel to it in Halloween 2. Once again Zombie directed, wrote & co-produced this movie starring the returning actors Tyler Man as Michael Myers, Malcolm McDowell, Scout-Taylor Thomas, Sherri-Moon Zombie, Brad Dourif & Danielle Harris who are joined by Margot Kidder in a small role as a psychiatrist.

As the movie starts, we have a flashback to Myer’s mother Deborah visiting a young Mike at the sanitarium and gifting him a white horse statuette. Michael says that the horse reminds him of a dream he had of Deborah’s ghost, all dressed in white and leading a horse down the sanitarium halls toward Michael, telling him she was going to bring him home. We are then brought back to 15 yeas, just after the end of the first movie when Sheriff Brackette finds a dazed and bloodied Laurie walking on the road. He takes her to a hospital. Dr. Loomis & Annie are also both still alive although barely and are taken to the same hospital. A year later, just before Halloween, Laurie dreams that Michael, still alive, had found his way to the hospital and killed the nurses and hunted her down as she runs to a police guard’s cabin. She wakes up just as Michael catches up to her in her dream.

Laurie is now living with Annie & Sherriff Brackett’s house. Michael’s body has been missing since last Halloween—still presumed dead—and Laurie has been having recurring nightmares about the event. As a result she is undergoing therapy and sees a psychiatrist regularly. Meanwhile Dr. Loomis, having recovered from his injuries, has released a new book and is enjoying huge success. Michael meanwhile went off to recuperate and recover on his own and starts having visions of Deborah’s ghost and a younger version of himself, who instructs him that with Halloween approaching it is time to bring Laurie home; so he sets off for Haddonfield. Laurie too begins to have disturbing hallucinations that mirror Michael’s, which involve a ghostly image of Deborah and a young Michael in a clown mask. Loomis meanwhile gets criticized for profiting from a tragedy and some people blame him for Michael’s actions and for exploiting the deaths of Michael’s victims.

Laurie finally discovers the truth of herself – that she is actually Angel Meyers, Michael’s long lost sister. She throws a major tantrum when she meets up with Annie at home and leaves to go to a party with her friends. Michael appears at the party and kills Laurie’s friend Harley who was making out with a boy then makes his way over to the Brackett house and stabs Annie repeatedly. Laurie & another friend Maya find Annie bloodied and dying and Maya also becomes a victim of Mike. Laurie runs away from the house and gets into a passing car but Michael kills the driver, flips the car and then carries an unconscious & injured Laurie to an abandoned shed. Laurie awakens to a vision of Deborah, and a young Michael, ordering her to say “I love you, mommy”. With help from a witness, Brackett and the police arrive at the shed followed by Loomis who overhears the radio report. At the shed Loomis and tries to reason with Michael, who on being told by the vision of his mother that it was “time to go home” comes out and stabs Loomis dead.

Michael, now in the open, is shot twice by Sheriff Brackett and falls onto the ground. Laurie walks over and tells Michael she loves him, then she stabs him repeatedly in the chest and finally in the face. She too is accidentaly shot as she was wearing Michael’s mask but does not die as Brackett stops the shooting. The film ends with Laurie in isolation in a psychiatric ward, grinning as a vision of Deborah dressed in white stands with a white horse at the end of her room.

A lot more gorier & bloodier and violent than the 2007 movie, this one is overkill. I found myself disappointed as I really liked the first one. Loomis’s character goes through a change as he is portrayed as a sellout, profitting from Michael’s case and becoming something of a diva. I found McDowell great once again but Scout-Taylor goes overboard and I couldn’t find her convincing in her portrayal of Laurie going berserk! 6 outta 10!