Take a minute to think about it. Does it only mean that you should take that chance as the positives far outweigh the negatives and you could gain a lot. Read that again – I have nothing to lose! Meaning I don’t have anything with me worth losing. I have nothing of value that I could risk losing. Which means that I have nothing important.

While the first situation is an ok way to be in, a good situation even, the second is not. It’s terrible and sad and a desperate state to be in. I never want to be in that situation. I want to only have the first kind of situations in my life.

This happened a long time ago, 2005?, a conversation between me and a lady colleague/friend of mine, while we were both in the office. I won’t say who, let’ see if she remembers and if you do remember please message me :)

Followed by loud laughing by me and a deeply embarrassed look on her face!!! 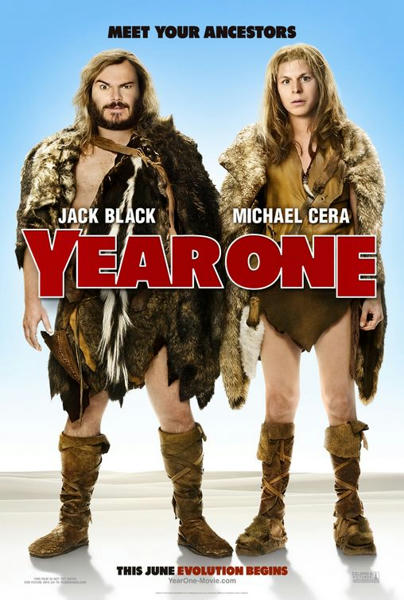 From director Harold Ramis & produced by Judd Apatow, we get Year One a 2009 comedy look at what a biblical era road trip would be like. Starring Jack Black, Michael Cera, David Cross, Oliver Platt & Olivia Wilde. The movie made on a $60 million budget did not do well at the box office, just making $62 mil and receiving mostly negative reviews. I do not know why though; it’s not great but it’s funny in places and I had a nice time watching it.

Zed and Oh (Black & Cera) are two hapless tribesmen living in the village and foraging in the forests; Zed is an incompetent hunter while Oh is a shy gatherer and picked on by most of the hunters. Zed had big dreams and wants to explore. He eats from the tree of forbidden Tree of Knowledge of Good and Evil, the shaman and Marlak banish him from the tribe. While leaving Zed accidentally sets fire to the village. Oh joins Zed in his trip to discover the world and what it has to offer. On their way they meet Cain & Abel – Cain kills Abel and informs Zed and Oh that they must escape with him or else be accused of killing Abel.

Later in a market they find that their tribesmen, including Maya & Eema – who Zed & Oh respectively have a crush on – have all been captured and are sold as slaves. They try to buy the girls’ freedom, but Cain ends up selling Zed and Oh and leaves. Enroute with their new masters, Sodomites attack the slave owners giving Zed & Oh a chance to escape. However the remaining slaves are taken to Sodom. Intending to rescue the ladies, our heroes decide to make their way in search of them. They come to a mountain and find Abraham about to kill his son Isaac. Zed stops them, claiming that the Lord sent him to do so. Abraham takes them to his Hebrew village and tells them about the cities of Sodom and Gomorrah. As Abraham plans to circumcise the men, Zed & Oh with help from Issac escape in the night and find their way to Sodom.

There they meet Cain who calls them his brothers and shows them around and makes them fellow guards for the Sodom army. The next morning they see Princess Inanna who is fasting because she feels guilty that most of the city is starving. Later she invites Zed to come visit her at the palace. At a party there they see Maya & Eema working as slaves and Oh, who was serving as a gold human statue is made to follow the gay priest around the palace. Inanna asks Zed to enter the the Holy of Holies and tell her what it is like, thinking that Zed is the “Chosen One”. When Zed enters he finds it to be empty & also finds Oh hiding from the priest inside the Holy of Holies. Once they come out however, the king has his soldiers arrest them for blasphemy. The two are sentenced to be stoned to death but Zed convinces the Sodomites to have mercy, so they are instead sentenced to hard labor until they die from work. The king then announces that he will be sacrificing his daughter and two virgins (Maya and Eema) as a gift to the gods in exchange for an end to the drought.

Zed interrupts the ceremony claiming to be the ‘chosen one’ and a riot starts. Oh saves Eema and Abraham arrives with the Hebrews to overthrow the king. The priest is sacrificed instead and it starts to pour rain. A grateful people declare Zed to be the new leader but he graciously declines and proclaims Inanna as the queen. Zed instead decides to become an explorer with Maya. Oh becomes the leader of the village and heads back with Eema and their tribesmen.