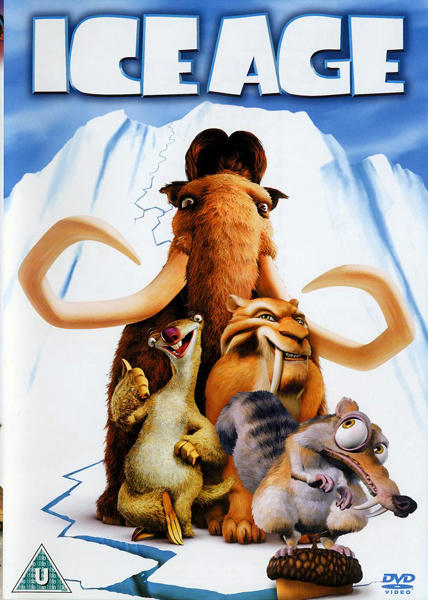 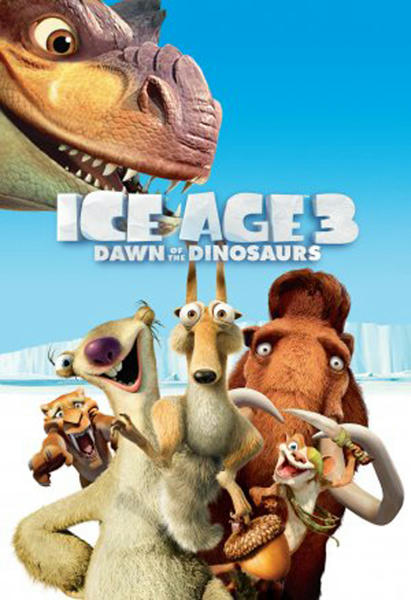 Who doesn’t love the Ice Age movies? If you don’t, go away from me. The amazingly fun & exciting storylines of the Ice Age characters – led by Manny the Mammoth (Ray Romano), Sid the sloth (John Leguizamo) & Diego the smilodon (Dennis Leary). As a large group of  Paleolithical animals try to make their way south to avoid the ice age, Sid is saved by an agitated Manny from two attacking brontops who Sid angered. Sid soon attaches himself to Manny for protection & friendship, much to the Mammoth’s annoyance. Meanwhile, Soto, the leader of a Smilodon pride wants revenge on a group of humans by eating the chief’s baby son, Roshan, alive. Soto leads a raid on the human camp, during which Roshan’s mother is separated from the rest and jumps down a waterfall when cornered by Soto’s lieutenant, Diego. For his failure, Diego is sent to find and retrieve the baby. Manny & Sid find the dying mother who entrust the baby to Manny.

Manny & Sid try to bring the baby back to the settlement but find it deserted. They meet up with Diego, who convinces the pair to let him help by tracking the humans. While having small adventures on their way, they reach a cave where Sid and Diego learn about Manny’s past and his previous interactions with the humans, in which his wife and son were killed, leaving Manny a cynical loner. At one time the group passes a flying saucer frozen in the ice, while Sid comes upon a display that looks like it’s showing the evolution of sloths. When they get near the ambush point Diego has a change of heart as Manny risked his own life to rescue him and tells them about the ambush awaiting them. A short fight ensues in which Sid, Manny & Diego are victorious against the smilodons and they finally get baby Roshan to his father & their tribe. The now pack of 3 leave for new adventures.

Which brings us to Ice Age 2 : The Meltdown. The ice is melting and the land animals need to find a giant tree that can act as a boat to save them from the impending flood. A lone vulture warns the animals that a giant tree can act as a boat and save them if they make it to the end of the valley within three days time, and all soon set out to find it. Our 3 heroes are soon joined by 2 opossums, Crash & Eddie with their adopted sister Ellie; a female mammoth who thinks she is an opossum too, much to Manny’s chagrin. He finally convinces her of her true nature. Ellie and Manny ultimately make up when they must co-operate to save the group when the ground cracks under their feet. Sid is kidnapped by a tribe of mini-sloths who believe Sid to be a god. However they plan to sacrifice him to a volcano and Sid barely escapes.

While making their way they run into a field of hot geysers, which separate Manny, Sid, and Diego from Ellie and her brothers. When the flood comes, Manny saves Ellie from drowning as she is caught in a cave (due to falling rocks), while Diego overcomes his fear of water to save Sid. Cretaceous and Maelstrom arrive, but due to Manny’s quick thinking, they are finished off by a rock which falls on them, killing them both. The flood is diverted saving all the animals when a crack in the glacier, which widens into a fissure, is formed by the antics of Scrat. At the end of the filma herd of mammoths shows up, but Manny and Ellie decide to remain together anyway, taking Sid, Diego, and the opossum brothers along.

In the third film, Ice Age 3 : Dawn Of The Dinosaurs our heroes are in a domestic situation with Ellie pregnant and Manny fawning over her. Diego decides to leave the herd, believing that he is losing his predatory nature as a tiger. Sid feels a little jealous of Manny & Ellie and “adopts” three apparently abandoned eggs that he finds in an icy underground cavern and call them Eggbert, Shelly, and Yoko. Despite warning from his friends to put the eggs back, Sid instead looks after the eggs, which hatch into baby Tyrannosaurus the next morning. Sid tries to raise them but they are too powerful & rambunctious to fit in with all the other child animals. The momma T-rex finds them and takes all 3 kids with Sid along underground. Diego, Manny, Ellie, Crash, and Eddie follow as well and discover that the icy cavern leads to a vast jungle populated by dinosaurs thought to be extinct.

In the jungle they meet up with an insane, one-eyed weasel named Buckminster, or Buck who helps them track the T-rex so they can rescue Sid. Buck has been living in this jungle for some time and is chasing Rudy, an abnormally large albino Baryonyx, with the intention of avenging the loss of his right eye at Rudy’s hands. The cross the chasm of death and as the herd moves toward Lava Falls, Ellie goes into labor and a Guanlong pack strikes. While fending them off Ellie goes into labour and deliver Peaches, a girl. Sid is rescued and when Rudy is about the attack them, the mamma T-rex, charges at him and knocking him off a cliff. The T rex and her babies bid Sid farewell as the gang makes their way back to topside, while Buck stays where he wants to be: underground, battling it out with Rudy, whose roar he hears again.

Very funny movies, my fav being the 3rd one. Can’t wait for the 4th movie.

And so the group stages of Euro 2012 concludes. Did not expect some of these results but in the end except for Holland not being there and Greece making it, it looks like a predicted quater-final lineup.Let’s look at the last round of matches in the group stages shall we?

Group A : It ended with a heart break for the Russians who started so well and a delight for the underdog Greek side. The Czech Republic beat co-hosts Poland by a solitary goal enough to see them top the group and go through to the quarters after a bad start to the tournament. But in the end they did what was needed. You can’t say that about the Russians who’s over-confidence led them to sit back against Greece on the 16th and they lost out of a chance to progress through. Greece too won by a solitary goal and they join the Czechs in the knck-out stages and will face favourites Germany.

Group B : Holland were not yet out of the running but still needed two things to happen – they had to beat the Portuguese side by 2 goals or more and Germany had to beat Denmark. Well the Germans closed out their group stage matches in style winning all 3 matches by beating the Danes 2-1. An Holland started off well by scoring in the 11th minute and looking strong. However their defense and midfield let them down as a Portuguese side went rampant led by Ronaldo who scored a brace and gave Portugal a 2-1 win and second place in the group with 6 points. Holland go back home with just 2 goals scored and 0 points and now have to go back to the drawing board.

Group C : Was there any doubt that Italy & Spain would not go through to the next round? Spain however did have a nervous match with Croatia winning on a solitary goal and relying on a late substitute to get the 1-0 win for them. Despite their nervy performance one would expect Spain to pick up their game for the knockout stages. Same for Italy who had a comfortable 2-0 win against a spirited Irish side who in the end were lacking in quality. I expect Spain to make it to the finals probably facing off against Germany, as they haven’t looked like they have reached their peak. Spain looks like they still have a gear or two left.

Group D : Finally the matches from last night, pulled off a surprise in the form of already disqualified Sweden handing France a 2-0 win. The Swedes will therefor go out with their heads held high but what does that do to the confidence of the French? They looked abysmal last night and will need to pick things up. Especially since their quaterfinal opponent is Spain! England look to have things in place by managing a 1-0 win against Ukraine and topping group one. That should give the English enough confidence against an Italian side who are yet to peak.

So hear is a look at what awaits us fans in the quaterfinals: Looks interesting. My predictions will be a a semifinal lineup with Germany vs Italy & Spain vs Portugal. Looks exciting.