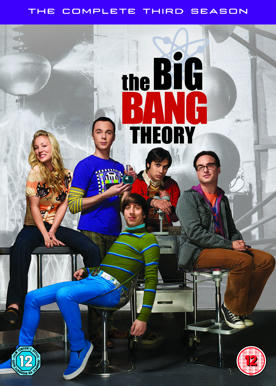 After the sentimental way in which season 2 ended, the four scientists return back in season 3 with full beards and long unkempt hair courtesy their 3 month expedition to the North Pole. enny finally expresses her feelings for Leonard with a passionate embrace and kiss. However, their ability to follow through with their now-revealed feelings for one another is persistently interrupted by fallout from Sheldon’s discovery that his friends tampered with his experiment while at at the MNP, which caused Sheldon to falsely believe that he had made a Nobel Prize-worthy discovery. An embarrassed Sheldon resigns and returns to Texas as he had mail the discovery’s details to most of his colleagues. His friends travel to Texas and convince him to return with more than a little help from his mother. Sheldon and Howard stake their most valuable comic books on a bet to determine the species of a cricket. Howard wins, while he Leonard & Penny explore their new relationship; they decide to go back to being friends, however it’s clear that neither wants that and they soon give in to their attraction.

Howard and Raj go out to a goth club and meet two girls. After they say they would prefer to go “somewhere else and have some fun”, the four end up in a tattoo shop, which makes Raj and Howard reveal their true selves and admit to not being goths (as well as having fake tattoo sleeves), missing their opportunity with the girls rather than having tattoos. Raj ends up working for Sheldon as his department closes and instead of going back to India he takes up the offer of joining Sheldon. Penny sets up Howard with her friend Bernadette (the cute little Melissa Raunch who will soon become a regular cast member) while Sheldon meets his arch-nemesis Wil Wheaton (who plays a different version of himself) – Sheldon was angered by Wil’s no-show at a convention many years ago and has held a deep resentment since then. In a card tournament the two face off in the final and Sheldon can easily win, but Wil lies, claiming his grandmother’s death prevented him from appearing @ said convention, which tugs at Sheldon’s heart-strings. Sheldon let’s Wil win, leaving Sheldon even more resentful of him after Wil tells him the truth.

While Raj & Howard go kite flying Sheldon, who grew up in Texas where it is popular, teaches Leonard how to understand American football so that he can try to fit in with Penny’s friends. Sheldon also behaves like a kid when Penny & Howard fight and he runs away. Later Penny dislocates her shoulder and gets Sheldon to take her to the hospital as no one else is available and gets him to sing ‘Soft Kitty’ to her. Leonard is with Raj and Howard on a camping trip to watch the Leonid meteor shower, but all three succumb to ‘magic’ cookies they get from Deadhead campers nearby. Hilarity ensues as their minds expand and the munchies set in and they forget about the meteor shower. Howard & Bernadette become a serious item when he proposes to Bernadette at the Cheesecake Factory, gets rejected, and then sings her his version of the song “Bernadette” in order to win back her affections, in which he becomes successful when she declares it as the most romantic thing anyone has ever done for her. Penny gets Sheldon to teach her some fundamental Physics so she can talk to Leonard about his work. We also meet Leonard’s mother  Dr. Beverly Hofstadter who gets along better with Sheldon; a somewhat inebriated Beverly gives Sheldon a deep, long kiss, but by the end of the episode they agree to keep that a secret from Leonard.

Sheldon gets inspired by a children’s ball pit and solves a physics equation that he has been troubled with for long. This is the episode that starts the ‘Bazinga’ craze. Leonard ends up taking Raj to Switzerland for a conference as both Penny & Sheldon who wanted to go along fall ill. Sheldon then gets a restraining order from Stan Lee for going to his house for an autograph. From a garage sale the four guys find one of the rings used in the Lord Of The Rings movie and fight over who gets to keep it. Sheldon’s friends come to his aid when his fear of public speaking stands between him and a coveted award. They offer to be Sheldon’s X-Men, which Sheldon changes to his “C-Men” because his last name is Cooper. At the event he gets hammed and drops his pants on stage. At a bowling competition between Wheaton’s team and Sheldon’s team, Wheaton puts the seed of doubt in Penny’s mind and she breaks up with Howard. As the two of them run away from the alley, Sheldon’s team has to forfeit the game. he episode folds with the four guys walking into the comic book store dressed like Catwoman (Raj), Batgirl (Howard), Wonder Woman (Sheldon), and Supergirl (Leonard), since they lost the bet to Wheaton and Stuart. After the break up lays it is as if Leonard and Penny are a divorced couple with joint custody of a child, Sheldon.

In a series of flashbacks we discover how Sheldon & Leonard became roomates and how Leonard introduced Raj & Howard to Sheldon, 7 years ago. We also learn of an accident that blew up the elevator and thus why it is always shown as under repair!  Howard and Raj submit an online dating profile for Sheldon, wondering who could possibly be compatible with him. The only match is  Amy Farrah Fowler (Mayim Balik who would also soon become a regular character). She turns out to be just as intellectual, opinionated, and particular as Sheldon and she acts almost exactly like Sheldon.

A cowboy was riding on his horse when he saw a rattlesnake. He took out his shotgun to kill it when, astonishingly the snake spoke and said “Please don’t kill me sir. Let me go in peace and in return you shall have 3 wishes as I am a magical snake”!

The cowboy was skeptical but still said “Ok. I wish for Brad Pitts looks as a 29 year old, a body like Arnold in his prime and for the 3rd wish well….. I want my sexual organ to be hung like this horse here!” The snake agreed and said by morning the wishes would come true. The snake went away and the cowboy went back home and had dinner but although he was too excited to go to sleep he finally collapsed on his bed.

The next morning as soon as he woke up he went to the bathroom mirror and washed his face – his now handsome face just like a 29 year old Brad Pitt! Excited he checked his body – rippling, bulging muscles just a young Arnold and a V shaped frame. Finally he removed his pajama bottom, trembling with excitement, looked down and cried “Oh shit, fuck! I forgot I was riding Mary Sue yesterday!!!!!!!!!!!”