The Cincinnati Kid is a delightful classical drama which was produced in 1965. It follows the trials and errors of Eric Stoner, who is nicknamed “The Kid”, as he pursues establishing a solid reputation as a respected poker player. This film takes place in the depression era, a time when money was scarce and life was extremely challenging. After hearing rumors that one of the most revered poker players would be visiting his city, he decides to pursue a match against him. During the final match, The Kid loses against Howard, who is in fact the player that The Kid intended to play against. In the end, The Kid’s full house was not enough to match Howard’s straight flush. He then loses his girlfriend after another woman attempted an affair with him- causing him to lose nearly everything. The Kid goes back to playing poker for change, but still keeps his pride.

This enlightening film triumphs the determination and aspirations of a headstrong man who loses all no matter how good he thought he was at poker. He quickly learns that poker is not only a game of skill; but of luck. This is a common misconception among poker players today, and gambling on poker games has landed many individuals in trouble. However, many are still amazed with the excitement of a poker game as evident from the increase in number of players playing poker on PartyPoker Slovenia. When this is coupled with the belief that one’s self is simply the best player, it can quickly land them in a world of disappointment; just as it did for Eric Stoner in The Cincinnati Kid. Gambling hard earned money should always be carefully thought, but many individuals tend to become overly confident and lose it all. 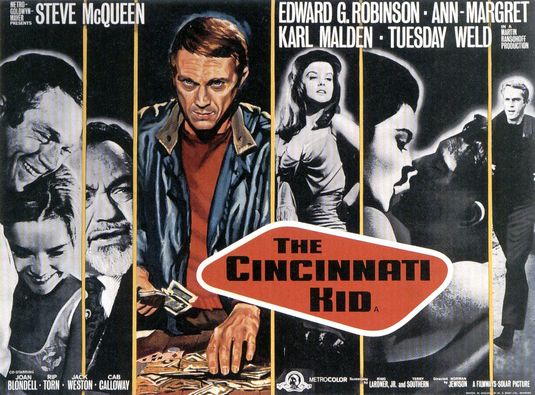 Nevertheless, this movie still shows that even though hard work and determination may pay off, you should not place all of your eggs in one basket. Nothing is certain to succeed. This is perhaps one of my favorite points of this movie. Sometimes, it takes losing it all for one to realize they should put a little more thought into their actions or motives, which is clearly demonstrated. Caution is an important concept in life, to preserve the things that mean the most to you.

The actors and actresses within this film (The Cincinnati Kid) all present incredible talent in the world of acting, and brought this production together wonderfully. The final showdown between Howard and The Kid is very intense and dramatic; the suspense keeps you interested and waiting for the final outcome. Steve McQueen (The Kid) and Edward G. Robinson (Howard) both play their roles exceptionally, making this film a classic within their careers. The supporting actors and actresses (Including Karl Malden as “Shooter”, Ann-Margret as “Melba”, and Joan Blondell as “Lady Fingers”) help to build a tense plot, supporting the disappointing climax of the film. They have all done a wonderful job on this film, and it is surely going to be enjoyed for years to come among poker
enthusiasts.

Ofcourse as it wasn’t so long back. I first got a broadband connection at home in September of 2006 and had continuously had it since, even though I changed my plan twice and changed my service provider once (around 45 days back). Before that I never had a connection at home. That’s right I first got internet at my place of residence at the age of 30. Woe is me. That was because we had money issues for a while and I couldn’t buy a new computer when my old, 1996 December old, system died on me back in 2003. It was on it’s last legs anyway and once it died on me I just couldn’t get enough money to buy a replacement.

In 2006 things got better after we sold our house and moved to the city area. Prices went down as well so I thought that this was the best time to get a new computer. I got one in September, built to my specifications and the desktop arrived within 2 days to my place. A month later, after checking out various options, I selected Tata Indicom’s broadband as my ISP and got the connection at home. Ever since then, I have pretty much been online all the time that I am at home and tv lost it’s appeal for me. In 2010 I sold what was left of my desktop and bought this laptop, which I hope to sell and upgrade to a new one in a couple of months.

So in the days before I read a lot of books and I watched a lot of tv. Every weekend would see me watch 4 to 5 hours of wrestling (WWE and WCW before it got sold to the former), movie and tv series. I was a big tv series guy and watch a lot of shows when I wasn’t reading or listening to music in my room. A couple of times a week, especially during the weekends, I would go to an internet cafe near my home and spend 3-4 hours there surfing the web, blogging, reading emails, etc etc. Now I can’t imagine only doing just that – I need my broadband every day for a few hours. For 3 weeks back in 2010, in between my desktop dying and me getting my current laptop, I was internet-less at home and it was boring to say the least. I did read a few books and watched some tv but I was bored outta my skull. Plus at the office they restricted all our internet access and it was emails only so I basically went off the internet map. For a lonely bachelor, there isn’t much to do when you are at home and there is no internet.