It’s been ages since I last went to a movie theatre to see a movie. Sometime in October 2004 I guess. Before that I was a regular visitor at the theatres. I’d go to watch most of the English language movies that they’d show in Cochin but Sridhar theatre was my favourite. Especially after they did a big renovation sometime in the late 90s. I’d go alone mostly but when my cousin Manoj still  lived in India, he & I used to go a lot. When I’d go I’d get a soft drink, some popcorn or chips and a candy. I loved the theatres and I had a special seat that I always wanted to sit in in the balcony section in Sridhar – it was the right most seat in the front row of the middle section – best viewing angle.

In 2004 I went for the most movies at the theatres that I remembered of in any year. That year there also was a James Bond movie festival and I had no computer or internet at home so I was bored. I worked a shift that saw me finish work at 3pm, so I would gather my stuff go to Shenoys theatre, buy snacks & a drink and sit in the balcony. I watched 10 of the Bond movies that year and 8 times I was all alone in the Balcony section. 8 times! So I’d take my shoes off, put my feet up and chill. Fell asleep once or twice too! The same year I remember going for Anacondas: The Hunt for the Blood Orchid, Troy & The Last Samurai. If I am not mistaken Troy was probably the last movie I saw in the theatres.

I dunno why I haven’t been to one since. There were many movies that I would loved to see in the theatres and thought of going. Avatar, Star Trek & The Avengers are the 3 that spring to my mind at the moment but I am sure that there were more. With The Dark Knight Rises coming soon, I might be tempted once again to break my self-imposed exile as far as movie theatres are concerned and go along with my cousin Sujith and see it on the first weekend that it gets released. Might be a refreshing change for me. 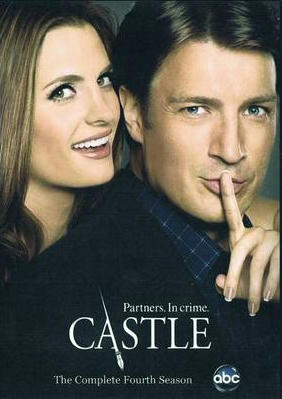 So Castle, season 4. In some ways this is more dramatic than the other 3 seasons but there are some funny scenes too. Really funny! Ok, so Beckett is rushed to the hospital, losing blood very fast. After undergoing extensive surgery, Beckett takes three months to recuperate before returning to the NYPD. With Castle she tries to find out who shot her and Captain Montgomery is replaced by Captain Victoria “Iron” Gates, who does not approve of Castle’s presence. As Castle tries to dissuade Beckett from digging deeper into the case, he himself is immersed in the process of trying to identify Beckett’s shooter. And it’s obvious that Kate hasn’t recovered completely from her shooting. When an ex-con is mysteriously slain in an alley, Castle and Beckett believe a vigilante is behind the murder. But efforts to identify their suspect are thwarted when they discover that he roams the city in a costume — and may indeed be a Superhero.

A tough episode & case is when while investigating the mysterious shooting death of a young woman, Castle and Beckett face a cop’s worst nightmare when they discover that the gun used in the killing is Det. Ryan’s old service weapon – the one that was stolen by the serial killer, 3XK. Now with the clock ticking, the team must work to solve the murder, track down 3XK and retrieve Ryan’s gun before the killer strikes again. Kristen Lehman guest stars as a former high priced art thief turned insurance investigator who is hunting for a a valuable sculpture is stolen, a case that Beckett & Castle are working on. And she has her eyes on Castle. When a world-renowned ghost hunter is mysteriously murdered while investigating a haunting at a legendary New York mansion, Castle & Beckett confront the possibility of paranormal foul play. Castle and Martha are taken hostage by a crew of bank robbers dressed in hospital scrubs and using classic television doctor names, Beckett finds herself on the outside, desperately trying to rescue them — which proves to be even more difficult with a by-the-book hostage negotiator watching her every move. Castle becomes the de facto leader of the hostages, and discovers that the robbery is actually a skillfully orchestrated distraction for an even more sinister plan.

Castle dressed as Elvis? Hilarious episode where I had tears down my eyes, investigating into the death of a casino owner in Atlantic City, Castle Ryan & Esposito go undercover dressed as Elvis impersonators. The team searches for a sniper who is terrorizing New York; Beckett tries to hide her worsening PTSD from Castle and the guys. Beckett and Castle awaken to find themselves handcuffed together with no memory of how they got here – wherever here is. And there is a tiger involved! When a Casanova is killed, Castle and Beckett suspect that the victim’s mysterious double life holds the key to his murder. Their investigation leads to a shocking twist that threatens to disrupt Ryan’s wedding with Jenny. The future career of NYC mayor is in jeopardy when he is the center of a murder investigation and Castle wants to do anything to clear his friend’s name. Nana Visitor guest stars in the next episode – a famous dog trainer and show judge is killed, the investigation keeps coming back to charismatic reality TV star Kay Cappuccio. Castle gets a hold of a diary that was written in the 1940s, and tries to solve a modern day crime through the information in it. Every time he reads it he flashes back to the ’40s, with the principal cast playing characters in the diary.

Castle and Beckett find out that the killer they are pursuing is part of an international conspiracy with, for once, real CIA involvement; meanwhile Alexis starts a new internship assisting Lanie in the medical examiner’s office.And the CIA agent (Jennifer Beals) is one that Castle has a fling with and the inspiration behind a previous character in his books – is Beckett just a little jealous? The CIA agent turns out to be the main person behind the Linchpin trying to start a war. When a woman dressed as Red Riding Hood is found dead in the woods with claw marks covering her body, and soon after a murdered Snow White is discovered with a poisoned apple in her hand, Castle and Beckett find themselves on a Grimm hunt to catch a fairytale killer before he kills again. A contestant on the hit competition show “A Night of Dance,” is found murdered in her dressing room. When a bomb explodes at a protest rally killing five people, Castle & Beckett realize the key to solving the case is to reconstruct the 47 seconds prior to the explosion. Using video and witness accounts, they uncover the shocking truth about who planted and detonated the bomb.

A devilishly handsome detective from Scotland Yard, Colin Hunt, teams up with Castle & Beckett to find the person responsible for the murder of his friend’s daughter. But by now Castle knows that Beckett remembers everything that happened just as she was shot and he is upset that despite knowing that he loves her, she did not saying anything. Meanwhile, Lanie convinces Beckett that she needs to make a move on Castle before it is too late. However Castle is dating hot blondes again. One fantastic episode is when Castle finds a new partner – his old Firefly buddy Adam Baldwin plays Detective Ethan Slaughter – he is almost killed multiple times due to Slaughter’s eccentric ways. The partnership is temporary! When Castle and Beckett investigate the murder of a man with human bite marks on his body, Castle’s wild theories start flying. But none are as wild as what their only witness insists happened – a Zombie attack. As the evidence pointing towards an undead assailant piles up, the team plunges into New York’s Zombie subculture to find the killer and bring him in — dead, undead or alive.

And then the season finale – the murder of an Army veteran puts Beckett on the trail of the man who shot her, Castle must decide how much he’s willing to sacrifice to keep her safe. As secrets are revealed and feelings are put on the table, the lives of the detectives at the 12th Precinct may never be the same. Castle reveals it all! He confesses that she’s only alive because she backed away from her mother’s case. “And that’s the reason you’re alive, Kate. Because you stopped.” “How do you know this?” she asks. And then, he drops his own bomb, and admits he’s been the one keeping her away. He refuses to watch Beckett throw her life away and says he is done and not going to be her partner anymore. With Castle off the case, Beckett and Esposo decide to pursue the suspect without backup. Beckett is almost killed by a mysterious man who kills off Castle’s informant the elusive Mr. Smith, and declares he’s gonna put Kate Beckett “in the ground once and for all.” . Ryan informs Gates everything and she puts Esposito & Beckett on leave. And Kate says she is quitting! As the season ends, Beckett goes to see Castle who is alone at home – and they kiss!

Surprise ending and I bet it thrilled a whole bunch of fans. But what will happen next season? Wait to find out!