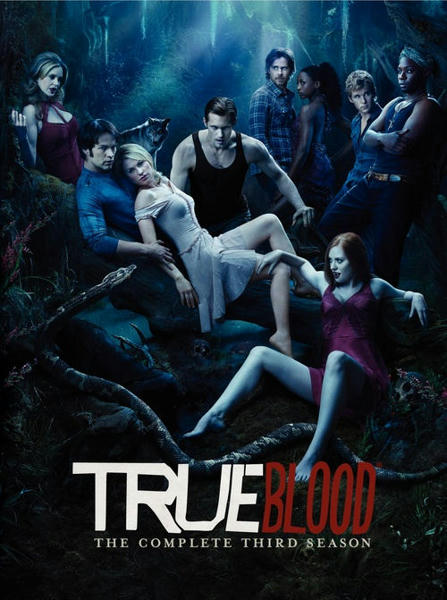 The second season was awesome and left you wanting more of the same. Well you got a whole lot more in season 3. After Sookie initially gets upset with Bill’s marriage proposal, she composes herself in the ladies room and comes back to tell him that she accepts. But Bill is no where to be seen – having been abducted by werewolves who serve the vampire king of Mississippi, Russell Edgington. A 2,800-year-old vampire, Russell wants Bill on his side as he has his eyes set on the queen of Louisiana, with whom he hopes to enter into a lavender marriage, though Russell himself is gay, but instead, to merge their respective kingdoms and gain more power. He openly defies the vampire authority.

Sookie searches for Bill and enlists the help of Eric in her search. On Russell finding out about Sookie’s abilities, he takes a deep interest in her and Eric arrives to protect her from the werewolves. He also assigned Alcide, a werewolf bodyguard, to protect her during the day and he & Sookie begin a friendship. Bill breaks up with Sookie and tells her not to try to find him. Alcide and Sookie attend the werewolf initiation of his former fiancee, Debbie Pelt, and discover that Russell is in league with the werewolves. Bill reveals to Russell that Sophie-Anne is selling vampire blood. The Magister leads a raid on Fangtasia and finds vials of vampire blood. Eric and Pam tell the Magister that Bill is responsible for the crime. Eric visits Russell, who catches him in a lie and forces him to admit that the Magister is holding Pam prisoner and will kill her unless he turns in Bill Compton for selling V. Russell takes Sookie and Bill to his mansion, where Bill kills one of the bodyguards and attempts to kill Russell. Russell orders Lorena to take Bill to the slaves’ quarters and kill him.

Meanwhile Jason decides to become a cop and blackmails Andy to train him as one, using the killing of Eggs as a bargaining chip. He also gets entangled with a were panther named CrystalA distraught Tara hooks up with Franklin, a vampire sent by Russell to get intel on Sookie, and that relationship turns bizarrely hostile with him keeping her tied up. Franklin is killed by Jason towards the end of the season. Eric learns that Russell is the one who killed his family over a century ago and gets back his father’s viking crown from Edgington’s shelves and kills Russell’s lover. While rescuing a dying Bill from Russell’s estate, Sookie is almost drained of her blood as she gets Bill to feed on her but he is unable to stop. So she ends up in the hospital and once recovered finds herself wary of Bill. Bill finds out that the reason Sookie’s blood is so enticing is because she is a fairy. Sam finds his birth parents; his mother and younger brother are both shifters and his father is a good for nothing scumbag who makes a living off of them as they shift into pitbulls used for dog fights. Sam rescues his brother and offers him a job at Merlotts. Lafayette finds a lover – Jesus who is a nurse in the nursing home where Lafayette’s mother is admitted. They experiment with V and  and, in their drug-induced state, see Jesús’ grandfather, a sorcerer who dabbled in black magic.

Distraught over his lover’s death Russell got a little insane and declares himself as a powerful & scary vampire to the world via kills a newscaster live on television. Eric informs Russell that drinking Sookie’s fairy blood will allow vampires to “day walk”. Bill and Sookie are taken captive by Russell and Eric, and brought to Fangtasia. Russell and Eric drink Sookie’s blood. Eric tricks Russell into walking outside, then handcuffs himself to Russell and they await death in the daylight. Sookie saves Eric from dying in sunlight, despite Bill’s protests. At Eric’s insistence, Sookie also saves Russell, and ties him to a pole in Fangtasia. Bill and Eric bury Russell alive in cement, then Bill turns the tables on Eric and tries to kill him by doing the same thing. Eric escapes and tells Sookie that Bill was originally sent to Bon Temps to procure her for Sophie-Anne and that he purposely allowed the Rattrays to beat her nearly to death so that he would be able to feed her his blood. After vowing to kill anyone who knows about Sookie’s fairy heritage, Bill invites Sophie-Anne to his home for a fight to the death. Sookie visits Gran’s grave where she is joined by Claudine her fairy godmother and other fairies and transported to their world.

I’ve used public transport for the most part of my adult life. I’ve owned a bike for a while but I sold that baby a long time ago. I use auto rickshaws for getting round in the city area and closer areas to my residence and the bus for longer distances. The buses in Kerala or Cochin atleast are always a good place to get your weekly entertainment – stuff that you don’t usually see anywhere else. Pickpockets and thieves are a plenty and you may sometimes have to be vigilant or they will expertly cut your pocket with a blade and whisk away your wallet and anything else that you can find. This used to be a lot more prevalent in some parts of the district and is under control for the most part now but still from time to time you do find the odd case.

I’ve on occasion seen people carrying birds in cages in the buses. A pigeon or two and maybe a parrot. One guy I sat next two at the very last seat had a couple of live chickens in a basket – obviously to be cooked back at home. Some people do like to raise chickens for fresh eggs at their home if they have some space in their backyard. Another guy had a kitten with him – a really tiny newly born kitten that he was taking home as a pet! The coolest was a squirrel that a guy kept with him wherever he went, tucked in a little pocket. The squirrel would stay close to him at all times and he told me that he took it to work everyday.

Other than that I’ve seen the usual stuff like guitars, violins, the odd wind instrument or two, tennis, cricket & badminton equipment and perhaps even some football gear. Computers, laptops, network equipment, bathroom fittings, baskets and buckets – you name it, I have seen it in a bus!