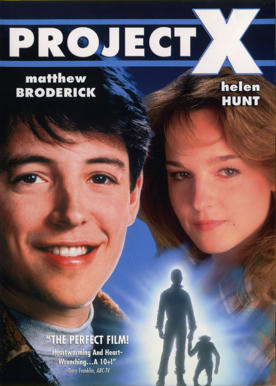 A long time favourite of mine, Project X is a 1987 release with elements of science fiction & thriller in it. Produced by Walter F. Parkes and Lawrence Lasker, directed by Jonathan Kaplanand starring Matthew Broderick, Helen Hunt, William Sadler and Stephen Lang. The story is about a USAF facility which houses an experiment using chimpanzees to test the effects of fatal radiation on pilots. The film makes a political commentary on the ethics of animal research.

The movie starts off with a baby chimp being captured in an African forest and shipped out to the US in a facility attached to a University where he is handed over to graduate student Teri MacDonald (Helen Hunt). Her work is in training chimpanzees to use American Sign Language. Teri names him Virgil and she teaches him ASL. When her research grant is not renewed, Virgil is taken away. Teri is told that Virgil will be sent to a zoo. Instead, he is taken to an Air Force base to be used in a top-secret research project involving platforms designed to simulate the operation of aircraft. Airman Jimmy Garret is sent to the same Air Force base as a punishment for “misconduct” (he stole a plane to have a romantic interlude with a young woman) is assigned to the same chimp project to which Virgil was sent.

The chimps at the facility are trained to use flight simulators. Jimmy bonds with Virgil  and they become attached to one another. He spends more time with Virgil when he finds out that his new friend can use sign language – indicating that he wants help to come out of his cage and that he wants an apple to give to a female chimp! Jimmy informs his superior, Dr. Carroll (William Sadler), but the latter is not interested. Jimmy continues his work and impresses his superiors. Unknown to him the chimps trained on the flight simulators will be killed by radiation poisoning. Once they reach a certain level in operating the flight simulator, the chimps will be exposed to a lethal pulse of radiation in the simulator chamber to determine how long a pilot may survive after a nuclear exchange known as the second-strike scenario. When Jimmy takes an older chimp, Bluebeard, to the chamber and sees first hand what happens to the chimps, he is appalled. Virgil also sees the dead chimp and he ‘alerts’ the others to their impending doom by screeching.

Jimmy breaks into the office records and find out Teri’s number and calls her up asking about Virgil and why she allowed him to be sent to the base. Astonished that he isn’t at the zoo as promised to her, she tracks down Jimmy and asks for help in getting Virgil out of there.  Concerned about his military career, Jimmy initially tells Teri that she should not have come and refuses to tell her anymore about Virgil’s fate. Later, Jimmy goes to Teri’s hotel and finds her just as she is leaving. Teri tells Jimmy she is going to go to Washington to inform the National Science Foundation of the deception. Jimmy tells Teri she does not have enough time because Virgil is scheduled to die soon. He confronts Dr. Carroll in front of   assembled military guests, and assorted politicians about the value of the project. Jimmy points out that the hypothetical pilot, knowing of the implications of the second-strike scenario, would know he is dying, and would, therefore, be affected by that knowledge. However, the chimps would not have the same awareness; thus, the project is flawed. This enrages Dr. Carroll, who promises Jimmy that his military career is finished. However this buys Virgil some time.

At night Jimmy sneaks into the base and finds  the chimps free in the facility having gotten their hands on the keys and are trying to break out. Teri is brought into the base by some soldiers who find her parked outside. Goliath the chimp becomes very angry and fights with Dr. Carroll, who has obtained a cattle prod and is attempting to use it to foil the chimps’ escape. The authorities are chased from the room. The chimps destroy some of the equipment and head to the  flight simulator room, where Goliath & Virgil damage equipment and unfortunately set off the radiation generator. Jimmy manages to get Virgil out but Goliath is stuck inside the room and a fire extinguisher jammed the controls leading to an uncontrolled radiation blast. Jimmy and Virgil convince Goliath to yank out the extinguisher, but Goliath dies from radiation because the chamber cannot be opened until the radiation falls below lethal levels. After this Jimmy & Teri sneak out with some of the chimps and steal a plane but are stopped by the soldiers. However with the humans outside, Virgil starts the engine and flies the plane out of the base and into the everglades – just as he and the other chimps were taught to.

The military & airforce search the everglades but the chimps have managed to evade them. As they are about to leave Teri & Jimmy spy Virgil and the chimps in some trees and signal them that they are free. The chimps disappear into the Everglades. The movie is sad and sweet at times and a bit funny in places. Virgil steals the show with his signing and (excuse the pun) monkeying around. Goliath is a smoker and tempted to do things by the promise of a cigarette. Good movie. 8 out of 10!