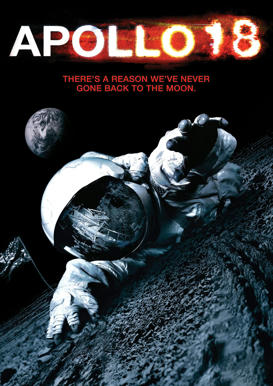 Apollo 18 is a science fiction/horror movie written by Brian Miller, directed by Gonzalo López-Gallego, and produced by Timur Bekmambetov and Ron Schmidt. This is a fictional movie that sets out to be like a found footage styled movie, supposedly the lost footage of the Apollo 18 mission that was only recently discovered. It claims that over 70 hours of footage was found and uploaded to a website, lunartruth.com and that the film is a heavily edited version of it. The movie stars Warren Christie, Ryan Robbins and Lloyd Owen.

The  crew of the Apollo 18 are informed that they will proceed with the mission, which was cancelled previously and moved to December 1974, as a top secret Department of Defense (DoD) mission disguised as a satellite launch.  Commander Nathan Walker, Lieutenant Colonel John Grey, and Captain Ben Anderson are the 3 astronauts in the mission and are told to place detectors near their landing site, the south pole of the moon, to alert the United States of any impending ICBM attacks from the USSR. We see the men excited with their families before the launch and then the footage moves to when they are in the shuttle. Grey remains in orbit aboard the Freedom Command module while Walker and Anderson land on the moon in the lunar module Liberty. While planting one of the detectors, the pair take moon rock samples.

After they return to the Liberty they hear noises outside, which Houston claims is disturbances from other detectors, and the camera captures a rock moving. Anderson also finds a rock lying on the floor, despite the sample being safely secured. During further lunar exploration they discover footprints that lead them to a bloodstained, functioning Soviet LK lander, and a dead cosmonaut in a nearby crater. Walker queries Houston about the Soviet presence but is told only to continue with the mission. The next day they find the American flag that they had planted missing. With their mission completed they are about to leave but have to abort the launch is aborted when the shuttle experiences violent shaking. Walker steps out to investigate and notes extensive damage to the shuttle and he also sees non-human tracks, which he says proves extra-terrestrial life. Walker feels something moving inside his spacesuit and is horrified as a spider-like creature crawls across the inside of his helmet. Walker disappears from view and Anderson finds him unconscious outside of Liberty. Walker later denies the events. A wound is discovered on Walker’s chest; Anderson removes a moon rock embedded within him. The pair find themselves unable to contact Houston or Grey due to increased levels of interference from an unknown source.

Anderson speculates that the true intention of the devices are to warn of alien advances. Walker’s infection spreads at an alarming rate and becomes paranoid. The mission cameras capture the rock samples moving around in the interior of Liberty, revealing that the aliens are concealed as moon rocks. A delusional Walker destroys some of the cameras and but accidentally damages the system controls, causing Liberty to depressurize. Realizing the Soviet LK is their only source of oxygen, the pair travel towards the LK lander in their lunar rover. Walker causes the vehicle to crash as he runs away, believing he should not leave the moon because of the risk of spreading the infection to Earth. When Anderson tracks Walker, he sees his comrade pulled into a crater by the alien creatures and is unable to pull  him back out. Anderson flees to the Soviet LK. Anderson uses its radio to contact USSR Mission Control who connect him to the DoD. The deputy secretary informs Anderson that they cannot allow him to return to Earth, admitting they are aware of the situation and fear he is also infected. He pleads but the deputy secretary is firm on his decision and says that his family will be taken care of. Anderson manages to contact Grey, who tells him to head for Freedom. Anderson prepares the lander for launch but it is attacked by a psychotic Walker. Before Walker can enter the vehicle, he is attacked by a swarm of the creatures, which breach his helmet, killing him.

Anderson launches the LK as Grey is warned by the DoD and orders him to abort the rescue or communication will be ceased, rendering Grey unable to return to Earth. As the lander enters orbit, the reduced gravity causes small rocks within the craft to float, some of which reveal themselves to be alien creatures. Anderson is attacked and infected by the creatures, preventing him from controlling the vehicle, leaving it headed uncontrolled toward Freedom. The space footage ends abruptly. As the movie ends, the ‘official’ fate of the 3 astronauts are written on the screen. An epilogue explains that many of the rock samples returned from the previous Apollo missions are now missing.

I found the intentionally bad camera footage a bit deterrent to my enjoyment of the film. It’s not really my idea of an exciting movie but it does have it’s moments. 6 outta 10! The Indians are beaten by the men in black to intimidate them. Upon returning to Washington, the FBI puts Scully on mandatory leave and forces her to turn in her badge and gun. Upon entering Mulder’s office, she finds the cassette missing.  Mulder, alive but severely wounded, is found buried under some rocks near the buried boxcar. Hosteen begins the Blessing Way chant to heal Mulder. During the ritual, Mulder has ghostly visions of Deep Throat and his father, who urge him to recover and continue his search for the truth. Scully finds out that she has a small metal rod inserted in the base of her neck and has it removed. Mulder and Scully search for answers regarding the old photograph with his father and other unnamed men. Their search takes them to the abandoned Strughold Mining Facility where they uncover a dangerous secret.

Mulder is skeptical over a coroner’s report regarding the fifth person to be struck by lightning in a small Oklahoma town. Their investigation into the latest death seems to point to the only person to have survived a lightning strike, an emotionally-charged youth. Guest starring Jack Black and Giovanni Ribisi. The next episode is one of my very favourite – Skeptical of a famous psychic’s predictions regarding the murder of several prognosticators, Mulder instead finds someone who he believes truly can predict the future. Catching the killer could prove difficult, though, particularly if the murderer can also see into his future. Guest starring Peter Boyle. A death row inmate makes good on his promise to come back from the dead and kill the five people involved in his death. The fear of his retribution has everyone scrambling to determine if they are on the list, while Mulder and Scully attempt to determine how he has returned to execute his tormentors. Meeting insecure women through an on-line service, a serial killer seduces his prey with the right words. However, Mulder and Scully determine these killings are far from ordinary by the presence of a strange substance coating the victims, a substance which seems to digest the fatty acids in flesh.

Another failed suicide attempt by a patient in a military hospital interests Mulder with the talk of a “phantom soldier” which has prevented the man’s death. The general in charge is at first opposed to the FBI’s involvement until the invisible killer begins stalking him. But none believe when the primary suspect is a quadruple amputee. When a young girl is kidnapped from her home, a fast food worker miles away collapses on the job, apparently experiencing exactly what the child is feeling. When Mulder learns that the woman was kidnapped and held hostage for years as a child, he begins to believe that she may be the key to help find the missing girl. Mulder & Scully then investigate a recording of a seemingly alien autopsy by a Japanese doctor. Mulder is trapped on a train carriage with a ticking bomb and a killer who claims to be an NSA agent. Mulder tracks a series of religiously motivated murders. Each of the eleven victims claims to have been stigmatic but all turned out to be frauds. When Mulder and Scully discover a little boy displaying inexplicable wounds of religious significance, they try to protect him from the killer they know will be coming. A small town is plagued by deaths in which the bodies are found covered in cockroaches. Working from home, Scully has scientific explanations for all of them but Mulder — at the crime scene with an attractive bug expert — suspects the insects may not be organic, or earthly.

Mulder and Scully investigate strange murders in New Hampshire that may be due to a rare planetary alignment that affects people’s behaviour. Agents Mulder and Scully join Mulder’s former mentor, the FBI’s chief profiler, on a case involving a serial killer who claims to be possessed by a demonic force. The case gets even more mysterious when the suspect is apprehended and the murders continue. Mulder gets involved more deeply than expected and Scully as well as Skinner are deeply concerned. When a French salvage ship sends a diving crew to recover a mysterious wreckage from World War II, the crew falls prey to a bizarre illness and Agents Mulder and Scully join the investigation. The investigation leads to the discovery of a familiar face, and to Skinner’s life being threatened. While Mulder continues to investigate a bizarre illness that originated with the discovery of a mysterious World War II wreckage buried at sea, several government figures try to thwart their efforts. And as Skinner recovers from his shooting, Scully discovers that he is still in danger, from the man who killed her sister. Agents Mulder and Scully’s assistance is requested for a case involving a man seemingly capable of bending people to his will. The suspect uses his mysterious abilities to manipulate Agent Mulder into a dangerous end game. A series of deaths occurs immediately after an ancient artifact is brought to Boston from an excavation site in Ecuador. According to Scully, the deaths appear to be the result of political terrorism, but Mulder suspects something more improbable.

A string of mysterious deaths of recent Chinese immigrants brings Agents Mulder and Scully to San Francisco’s Chinatown. The Agents team up with a Chinese-American detective to better understand the language and customs of the Chinese culture, but one thing remains frighteningly clear — all of the bodies are missing various internal organs. When a couple claims to have been abducted by aliens, Agents Mulder and Scully try to get at the truth but everyone has a different version of the story, including the “aliens” themselves. During a difficult time in assistant director Skinner’s life, he meets a woman in a bar and spends the night with her. The next morning, the woman is dead and he is accused of murder. Agents Mulder and Scully join the investigation to clear their supervisor’s name. As they unravel the threads of a conspiracy, they also learn more about Skinner’s personal affairs. When a series of mysterious deaths and disappearances are reported near a lake in a small town, Agents Mulder and Scully are called in to investigate. With local folklore of a killer sea serpent running rampant amongst the locals, the agents must take their search for the truth to the water. As the agents investigate a series of murders committed by ordinary citizens angered after seeing illusory images, Scully’s trust in Mulder is put to the ultimate test. Agents Mulder and Scully search for a man who seems to possess strange powers, which leads to the discovery of a dangerous secret from Mulder’s past. The secret could bring Mulder and Scully to the brink of exposing the truth about alien existence.