Nickelback’s video for This Means War. 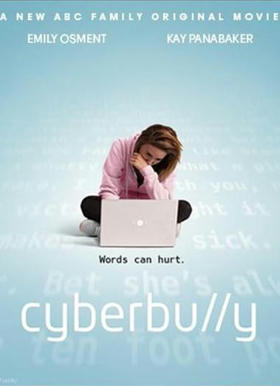 Cyberbulling is a major problem affecting young people for the past few years. Teenagers especially are prone to get severe emotional trauma by the nasty comments and remarks made by their peers from school, in a world where they already are searching for acceptance and understanding. Cyberbully is tv movie from ABC family that addresses this issue. The movie stars Emily Osment (Halley Joel’s younger sister), Kay Panabaker (Danielle Panabaker’s younger sister), Meghan Rath (not sure if she is someone’s sister but hey – her mom is from Goa) & Kelly Rowan.

17 year old Taylor Hillridge is given a new laptop from her mother Kris on her birthday. Taylor, whose father recently left the family and is being raised by her single mother along with her younger brother, Eric, is close to two other girls – Samantha & Cheyenne. The three girls are usual targets of the ‘in-crowd” at their high school, led by queen bee Lindsay. At the urging of her friends, Taylor signs up on a popular social network site (like Facebook) and joins their school’s page. She also tries to attract the attention of her crush Scott and hopes he will chat with her online. Things go wrong when Eric hacks her account and posts a nasty personal post using her id, which leads to so many nasty comments by Lindsay and others on the site.

However she also befriends a new person, “James”, who seems to be understanding and appreciative of her thoughts. While chatting he tells her that he goes to another school, one which Cheyenne’s cousin goes to. However things go back when James tells others that he slept with her and that he got an STD from her. The nasty comments get worse and worse and Lindsay even calls out her lie of being a virgin. Both Scott and Cheyenne start to keep their distance with only Samantha sticking by her friend. The abuse that Taylor receives from the hands of her schoolmates pushes her to a breaking point. Her mother is appalled by the comments and tells her to delete the account. However Taylor is still curious as to who James is and tries to find out, while trying to convince the others that she didn’t sleep with him. However a mock video of someone using a blow up image of her face and wearing it as a mask surfaces on the site. The fake Taylor is also shown to be pregnant. Unable to bear the shame, Taylor tries to commit suicide and posts her own video saying goodbye.

Taylor is unable to get the the cap off the bottle of pills and Samantha, on seeing the video, reaches in time to stop her in time. Taylor’s mother and the ambulance arrives and Taylor is sent to a hospital. She meets a therapist and is assigned to a therapy group for young teens. Kris tries to find out about James and approaches Cheyenne, who tells her that she checked with her cousin and that this James guy does not go to her cousin’s school. However James has disappeared from the site, his account deleted. And then Samantha drops the bomb – she is in fact “James”, having created the fake account to make Taylor stay away from Scott, who she thought was a typical jock who would use and then dump her friend. She apologizes to Taylor and says that the didn’t realize that the comments would have this much damage. Taylor is stunned and retreats to her therapy group. She finds comfort there and makes friends with a gay classmate who has been bullied a lot at their school.

Taylor & Samantha patch things up with the latter comes to support her friend at a newspaper interview, coming forward as the guilty person. Taylor and Scott also star talking and she also becomes closer to her mother. On her return to the school, Taylor & Samantha stand up to Lindsay’s nasty comments. Cheyenne, Scott & the gay classmate also join in and stand up to Lindsay’s friends, who then leave the cafeteria to an ovation from the rest of the classmates. Scott joins Taylor and her friends for lunch as the movie ends.

A bit cheesy, ok quite a bit cheesy in places, especially in the reactions of the school kids. It also hurts that the main antagonist is played so badly by a silly looking actresses who tries so hard but fails miserably. Still 7 out of 10 as most of the movie is good. Shot in beautiful Montreal.

Arsenal came back from a goal down to defeat their London rival West Ham 3-1. Arsenal has a good record away at West Ham and that trend continued last night as Wenger’s boys took all 3 points. West Ham took the lead against the run of play when Mohamed Diame beat Vito Mannone with a curling shot. Olivier Giroud scored his first Premier League goal for Arsenal as they equalised before the break when he poked in Lukas Podolski’s cross at the near post. Kevin Nolan missed two chances for the hosts and was made to pay when Theo Walcott came off the bench to make it 2-1 with Santi Cazorla hitting a third. Walcott, who replaced the disappointing Gervinho, helped the Gunners take advantage in the last half hour as West Ham tired.

But having been on top for large parts of the game, it was no more than Arsene Wenger’s team deserved as they extended their unbeaten record against the Hammers to nine games and moved to fifth in the Premier League table. As Arsenal began to assert their authority on the game, Walcott latched onto Giroud’s through ball just 16 minutes after coming on to score his fourth goal of the season with a precise near-post shot. Another chance fell to Nolan, but he fired over from the edge of the penalty box, and that miss proved costly once Cazorla smashed in Arsenal’s third from 20 yards to cap a superb individual performance.

That was an awesome attacking game to watch after a wonderful day.