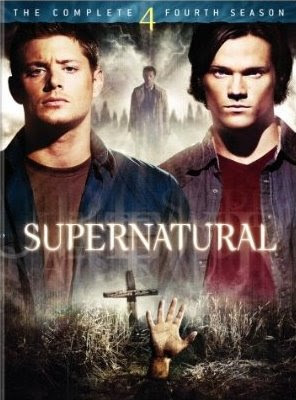 Season 4, which takes place, 4 months after the events of season 3’s finale, sees Dean mysteriously waking up in a coffin in a deserted cemetery and town. He digs his way out and tries to contact Bobby but is attacked by an unseen entity. He gets back to meet up with Sam and after reuniting with Bobby as well, they are introduced to a psychic named Pamela Barnes. Pamela does find out the name of the being, Castiel (Misha Collins), but, disregarding psychic warnings, the sight of seeing Castiel burns her eyes out, resulting in her becoming permanently blind. Sam meanwhile has been carrying on with Ruby, now in a new body (Genevieve Cortese) and is flexing his powers, which are fueled by his drinking some demon blood from Ruby. This would later have severe consequences.

Dean & Bobby perform a ritual to bring forth the entity Castiel and are surprised to find out that he is an angel who explains that he is responsible for dragging Dean out of Hell and, when Dean asks why he of all people would be worthy of being saved, that God has work for him to do. This addition in the cast works so well as he is a perfect foil for the brothers, especially Dean, who he later grows close to. Whereas Dean is fun, likes to kid around and crack onliners, Castiel is all sour & gloomy and has no personality (initially). Later, Castiel appears to Dean in a dream and reveals that “The Rising of the Witnesses” is one of many seals, which are being broken by Lilith in order to bring on the Apocalypse, in which Lucifer will walk the earth. They must do everything they can to stop it from happening.

In this season Dean is brought back to the future to meet his young father & mother before they were married. Dean finds out that it was Mary who was a hunter and that it ran in the family as she was following in her own father’s footsteps. John is unaware of her activities and it was her death, many years later, that pushed him into the life of a hunter. Sam & Dean will fight over Sam’s using his demon blood induced powers to stop demons and excorsising them. Sam decides to stop after watching a man struggle. We also learn that Dean is haunted by hallucinations of his time in hell, which he initially said he doesn’t remember. Castiel brings his fellow angel Uriel who clashes with the brothers as he has a low opinion of humans. We are also introduced to Anna, a fallen angel who questioned the divine plan and was living as a human due to amnesia. Dean also reveals to Sam that he does in fact remember Hell and what happened there: it was 40 years for him instead of 4 months, and every day Alastair (Hell’s torturer), tortured him and then offered him release from the torture if he tortured souls himself. After 30 years, Dean gave in and is now haunted by how he did so.

Dean is asked to use his torture skills to get information from Alistair, who Castiel and Uriel have captured. Alastair tells them that Dean broke the first seal when he tortured people in Hell, which is what Alastair had tried with John Winchester before he escaped, but failed. After Alistair is killed by Sam, they learn that Uriel is behind killing a lot of angels, having moved towards Lucifer’s side. Anna kills Uriel and saves Castiel, who confirms to a despondent Dean that he did break the first seal with his actions in Hell. We also meet Castiel’s boss, Zacharia and a prophet of the lord, Chuck who is also a failed novelist and who has written a series of novels based on the lives of the bothers. He sees what they do as it happens. As Sam’s addiction to demon blood continues, he is put in a detox room by Bobby & Dean. Sam and Dean have a blowout confrontation in which Sam chooses Ruby over his own brother. Meanwhile, Dean is kidnapped by the angels and brought to a room without any exit where Zachariah explains to him that the angels are not trying to stop the final seal from being broken—in fact, they want to start the Apocalypse, for it will cleanse the earth and bring Paradise. So Dean’s task is not stopping the Apocalypse from starting, but ending it once it has. Dean is furious at Castiel for deceiving him, but Castiel refuses to help at first but changes his mind and helps Dean escape, banishing Zachariah with a blood sigil.

The two get Sam’s location from Chuck Shirley and Castiel transports Dean there with Ruby’s Knife while he stays behind to confront Chuck’s Archangel. At Saint Mary’s Convent, Sam, high on demon blood, confronts Lilith who is practicaly powerless against him. Dean tries to reach Sam in time to stop him, but Ruby blocks him. Goaded by Lilith and Ruby, Sam kills Lilith with his powers, but killing Lilith breaks the final seal. Ruby reveals that she has been deceiving Sam all along to lead him to this moment, having worked for Lucifer all along. Ruby’s alligence was so secret that only Lilith knew the truth. Sam is unable to kill her due to his powers being exhausted by killing Lilith, but Dean breaks in and with Sam holding her in place, Dean stabs Ruby with her own knife, killing her. However its too late and Lucifer’s Cage opens and he begins to emerge.

Anyways….so where was I? Oh ok. To think about a perfect Sunday morning – how’s this? I wake up early unaware of the wonderfulness that awaits me. It’s a gorgeous and breezy morning and the sun is out but it’s not too hot. I open the door to get the newspaper and the milk and see, yes they both are there, but someone has also left freshly made croissants in a bowl for me! A well meaning neighbour perhaps. Brilliant, so now on to coffee making! I happen to make some which is just the right sweetness and just the right amount of coffee powder to create a heavenly cup. Awesome and the croissants taste delicious with my coffee! Read the papers, have a shave and a shower and check out what’s happening around town. Oh a new store that sells discount books and dvds/blurays? Must check that out.

While checking out the new store, I bump into a lovely woman who shares the same interests as me in music and movies and we get to talking. And surprise – she’s my new neighbour who left me the delicious croissants. “Thank you fair maiden and can I repay the favour by taking you out for some coffee as soon as we are done here?” I ask. “Why yes ofcourse. I’ll be delighted to join you for coffee”! (no I didn’t transport myself into 18th century England, no matter how it sounds). And so we sit in a cafe and we share a couple of cups of coffee and we laugh and we talk and the times goes on by….it’s only getting started!

So how does that sound?